A Night at The Olde Angel Inn, Niagara on the Lake This weekend Teena and I went down to Niagara-on-the-Lake to see The Philadelphia Story, which is part of the Shaw Festival. We stayed overnight at the Olde Angel Inn. Although we have eaten and had pints there before, we have never stayed over night in the historic old inn. We corrected that last night.

The picture above is the view when you walk into the pub section. Below is the entrance off the street to the inn. 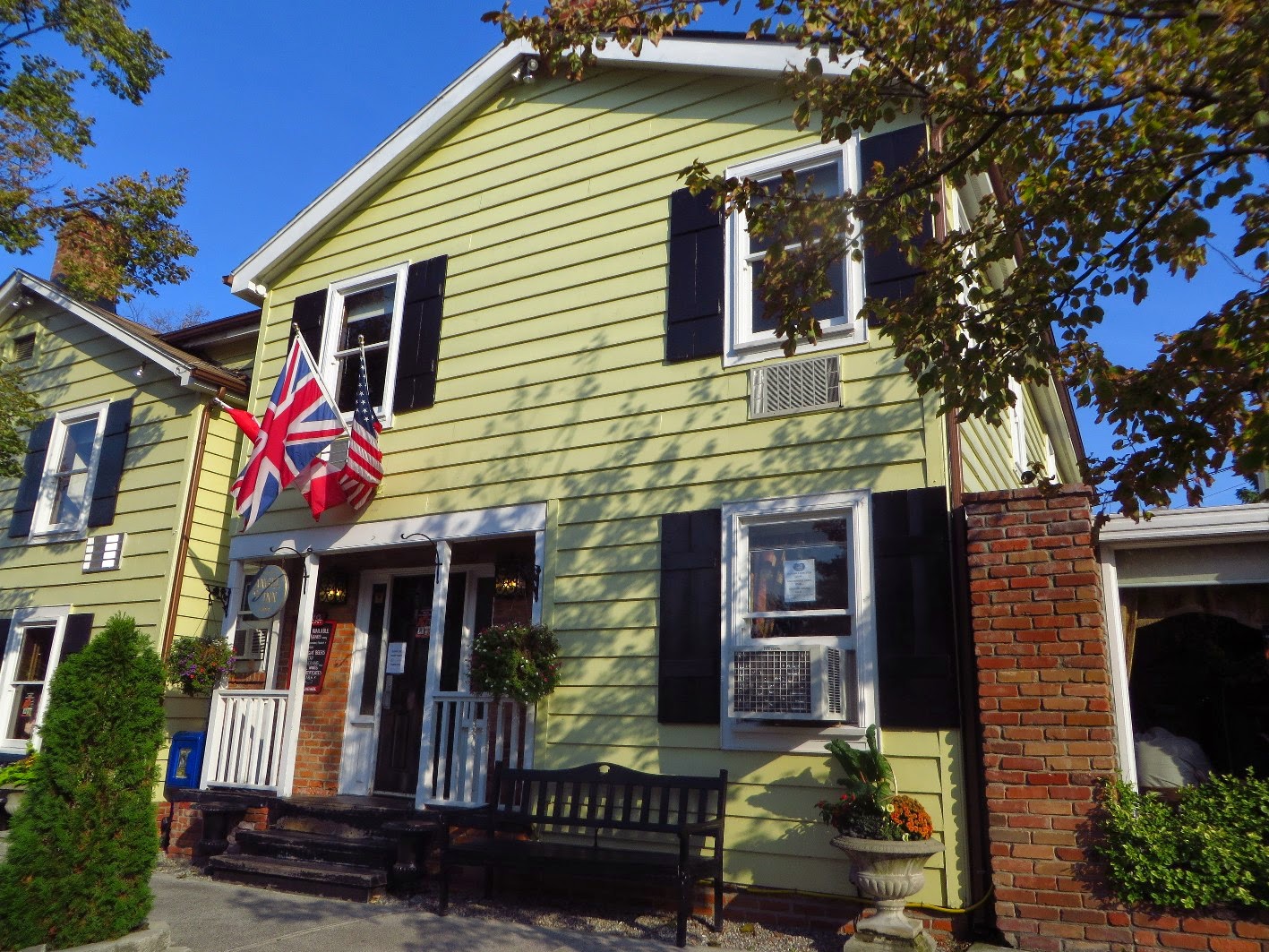 The Olde Angel Inn's rooms, with exposed hand-hewn beams and thick plank floors laid in 1815, still echo to the sounds of the British soldiers and townsfolk who, two centuries ago, gathered here for food and drink. Small but unique, the Inn is believed to have been founded as The Harmonious Coach House on land granted to the deputy surveyor-general around 1789. The town was then called Newark and was destined to become the first Capital of Upper Canada. Records from this time are sketchy but it is known that in 1793, the new Assembly passed an act outlawing slavery, the first such law enacted anywhere in the world. It is believed that the legislators celebrated the event over dinner at the Inn that evening.

The Inn is thought to have hosted such historical figures such as John Graves Simcoe, the first Lieutenant-Governor; Alexander Mackenzie, the explorer; Prince Edward, the father of the future Queen Victoria; and Thomas Moore, the Irish National Poet.

The Inn was badly burned during the War of 1812-14. It was rebuilt by John Ross in 1815, who named it the Angel Inn, in a tender reference to his wife. In 1826, Richard Howard bought the Inn, and also operated the Promenade House or Howard's Hotel just down the street. John Fraser purchased the Angel in 1845, and it was known as Mansion House, then Fraser's Hotel until reverting back to its earlier name of the Angel Inn. 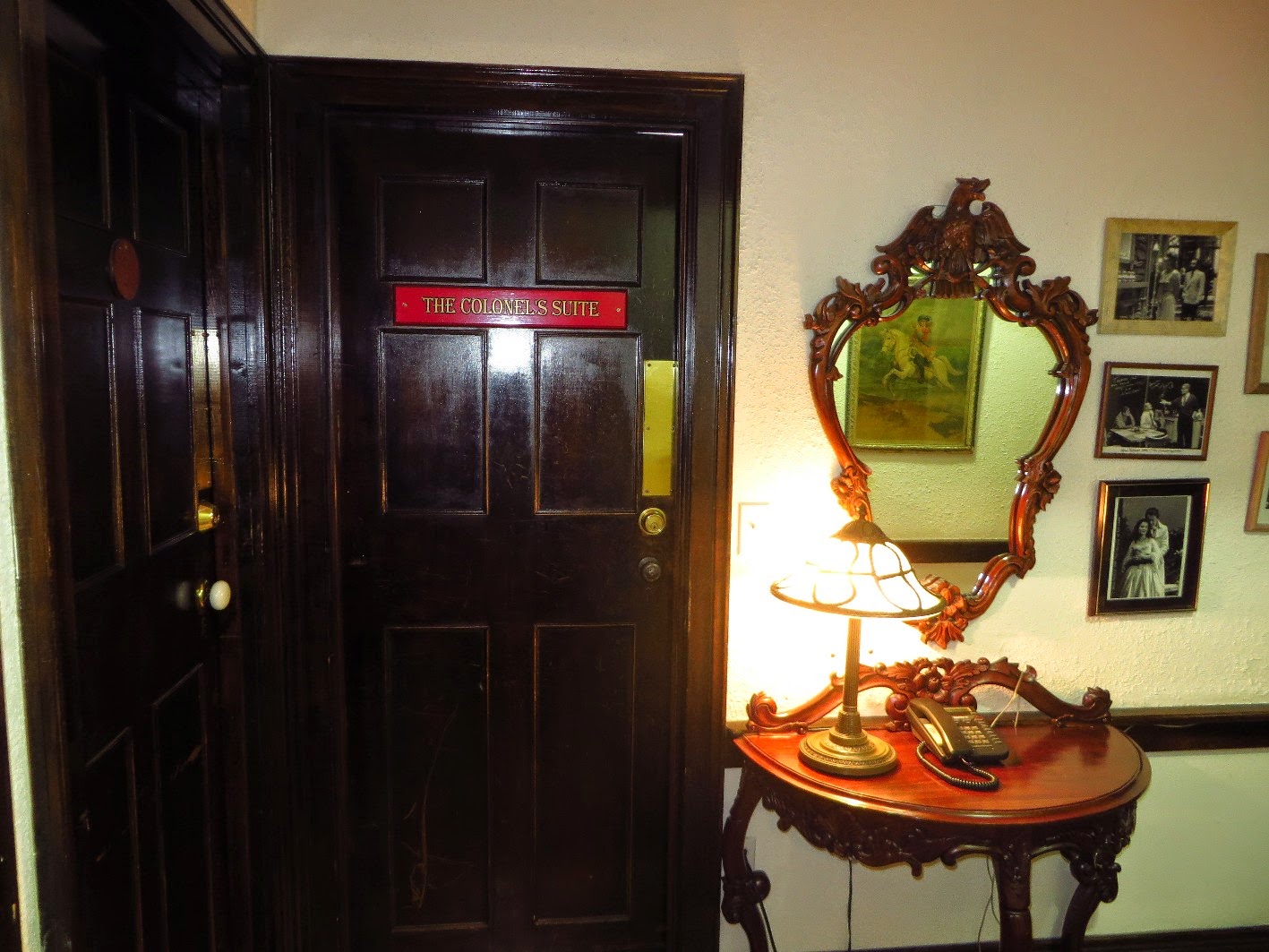 We stayed in the Colonel's Suite, which is just above the main entrance.

There is a popular local legend (that shows up in accounts dating to the 1820's) of an unfortunate Canadian militia officer who was killed at the Inn during the American invasion of May, 1813.

Captain Colin Swayze had delayed joining the British retreat in order to rendezvous with a young woman, believed to be his true love. Surprised by American soldiers sent to search the Inn, he hid in an empty barrel in the cellar. The invaders used bayonets to prod into every corner and possible place of concealment and the unlucky lover received a fatal wound. Some believe the Ghost of Captain Swayze is fated to walk the Inn at night, perhaps in longing for his sweetheart. There have been reports of noises coming from the empty(?) dining room, rearranged place settings, and other unexplained occurrences.

It is said that his ghost will remain harmless as long as the British flag flies over the Inn, a precaution prudently taken by the proprietor.

You can see that, yes, the Union Jack is flying over the entrance outside our window protecting us. 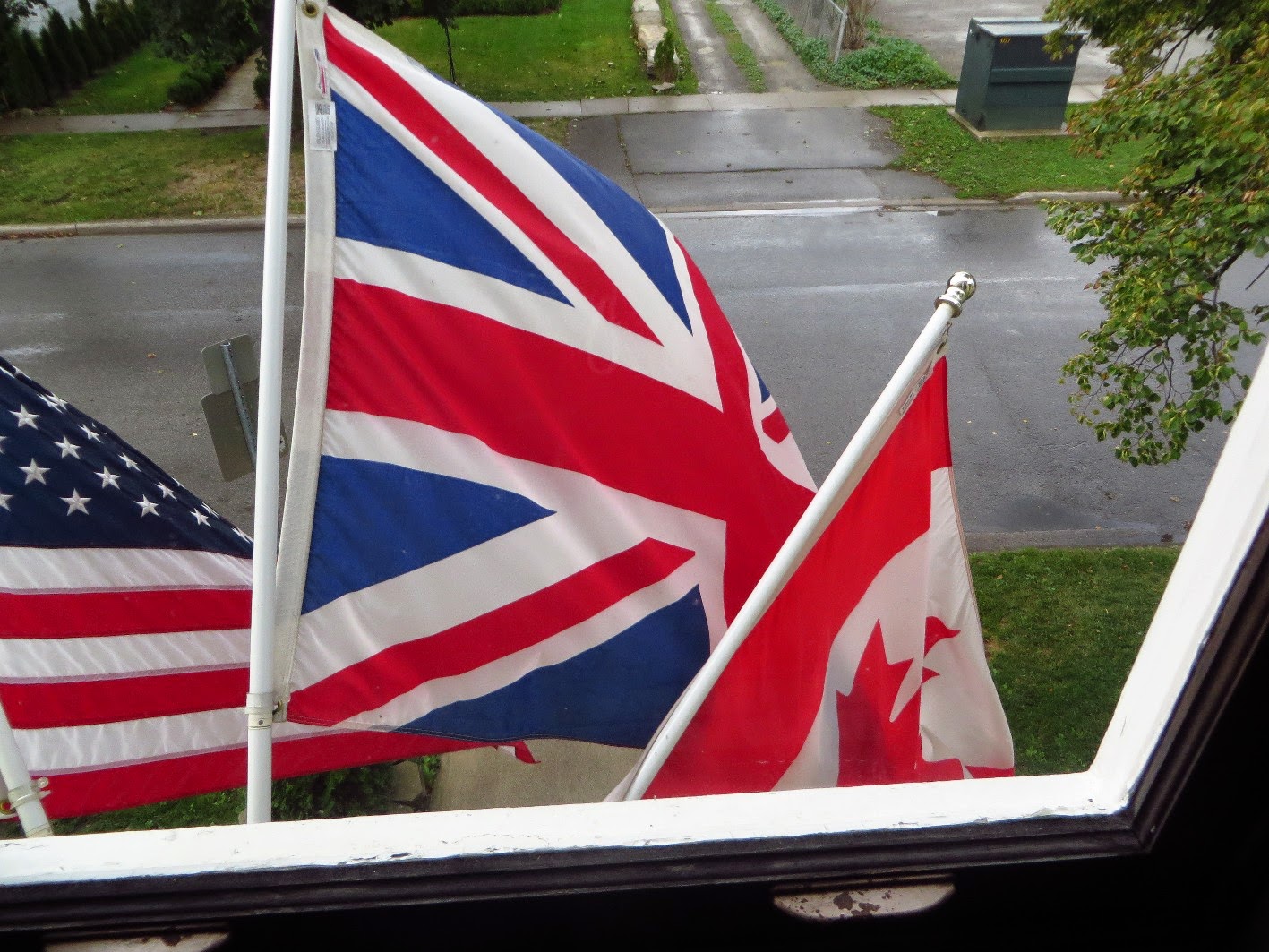 Our bedroom with an unusually high bed. 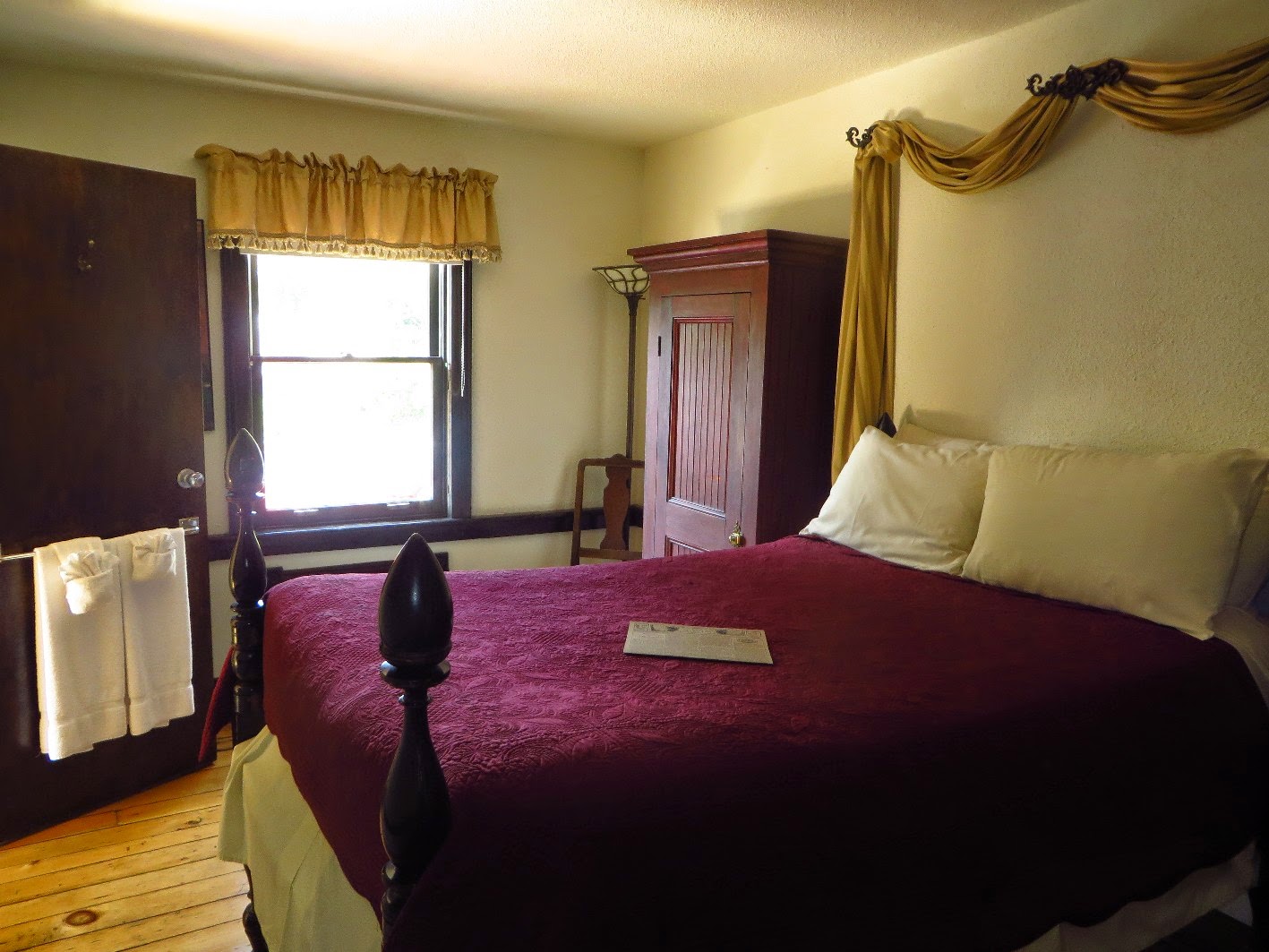 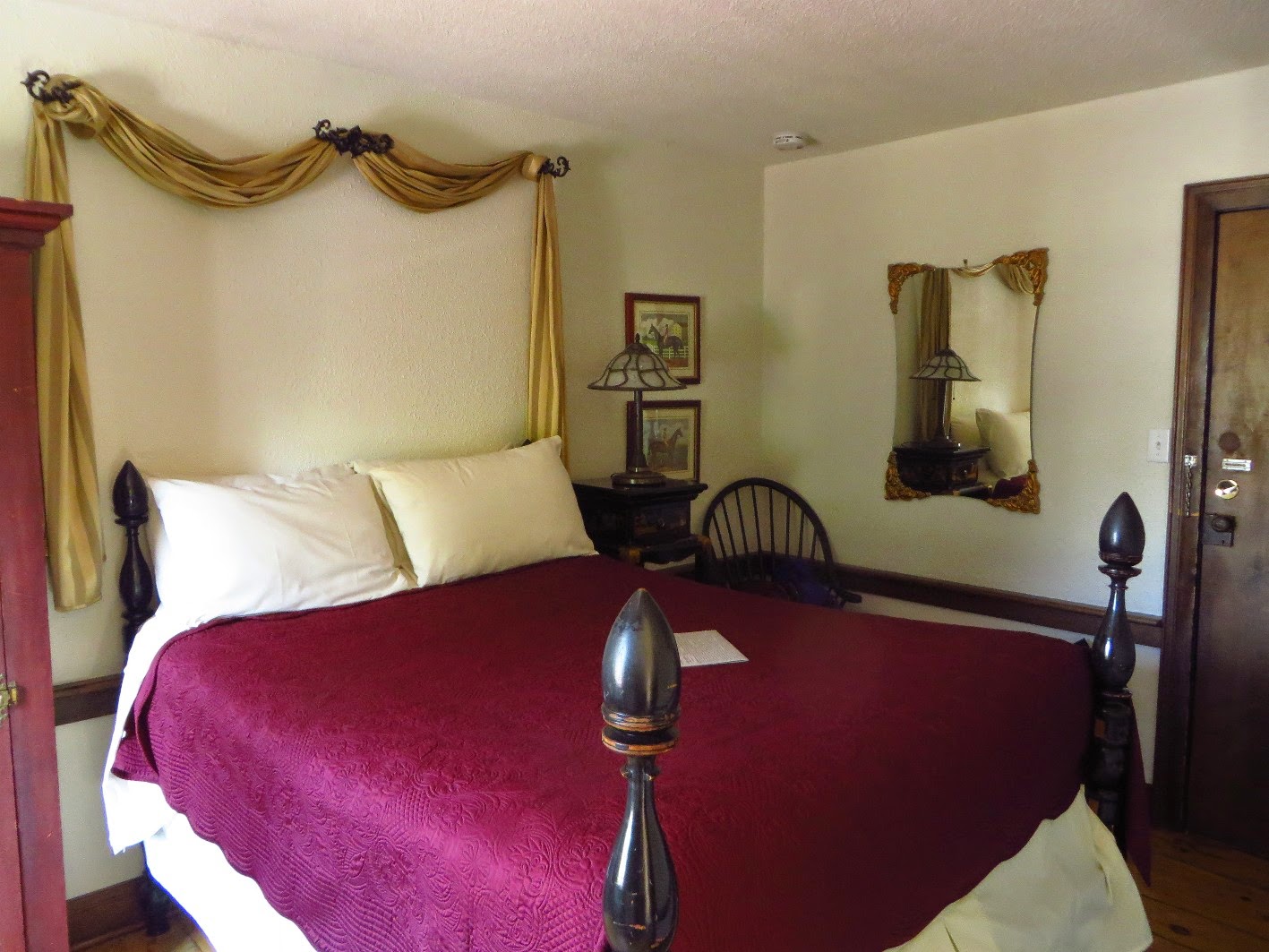 Off the bedroom is the washroom and a surprise. Another room beyond it! 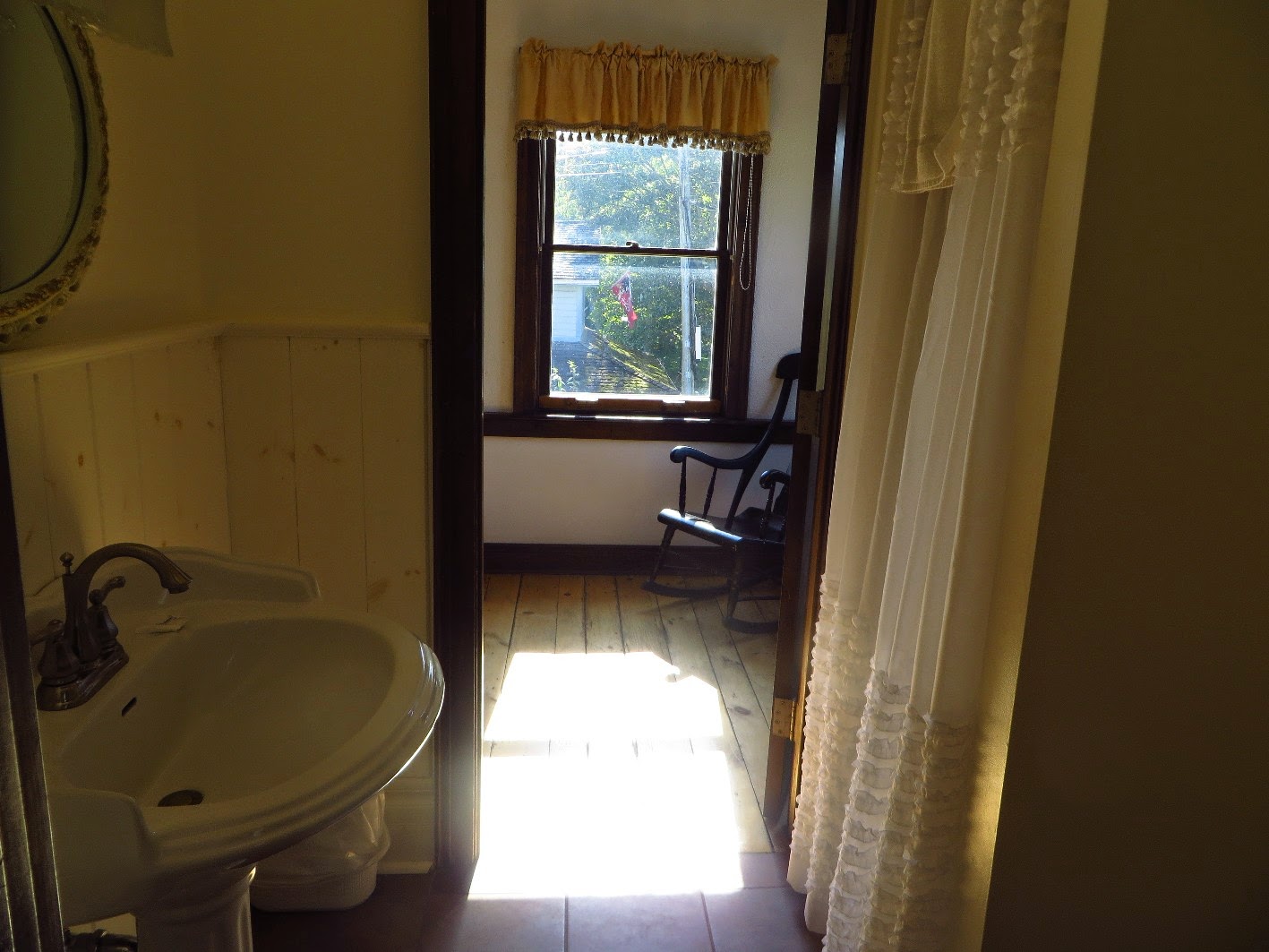 I first thought it was a small sitting room with a rocking chair but I was mistaken. It was a small cozy and very comfortable living room. 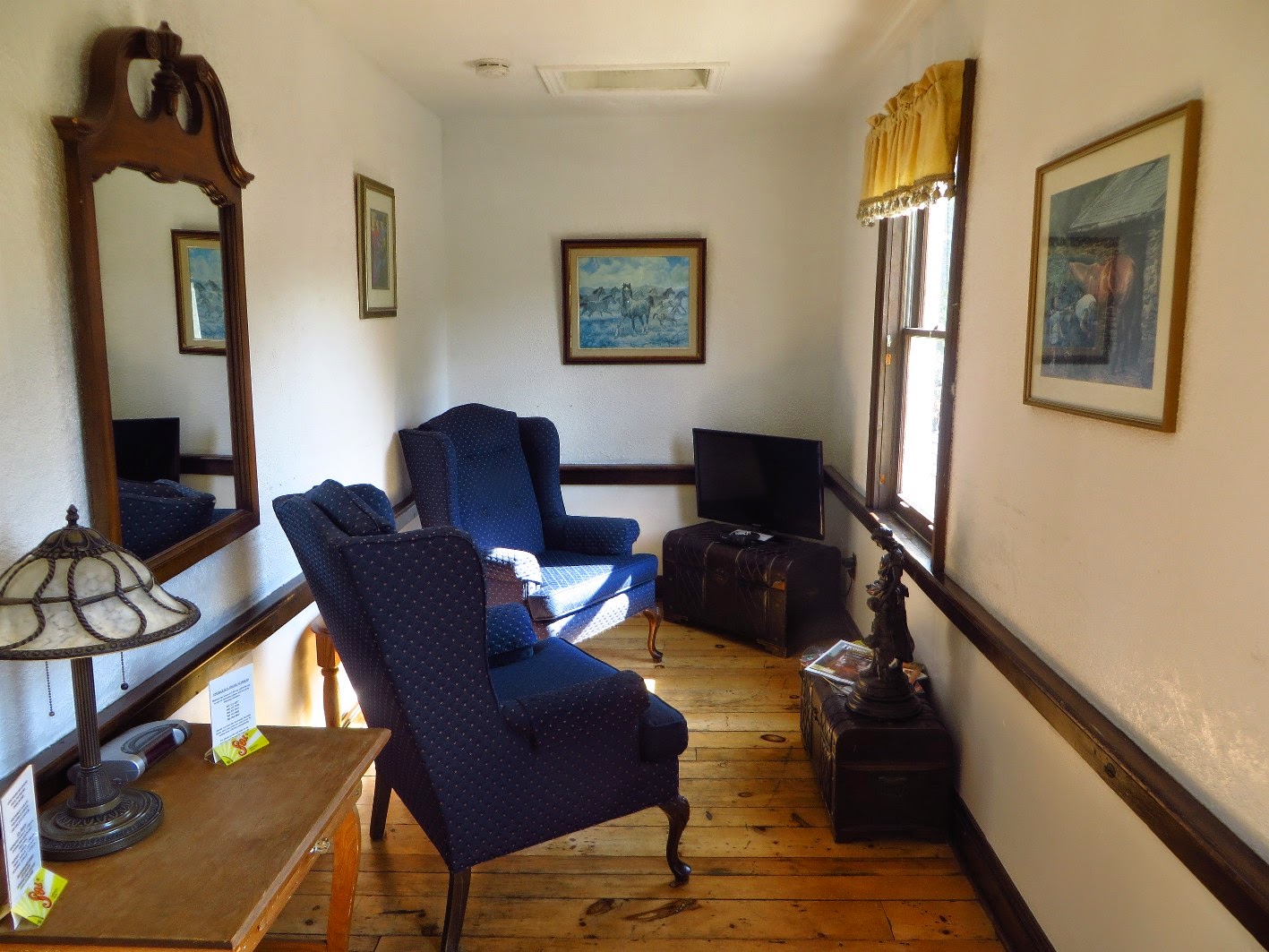 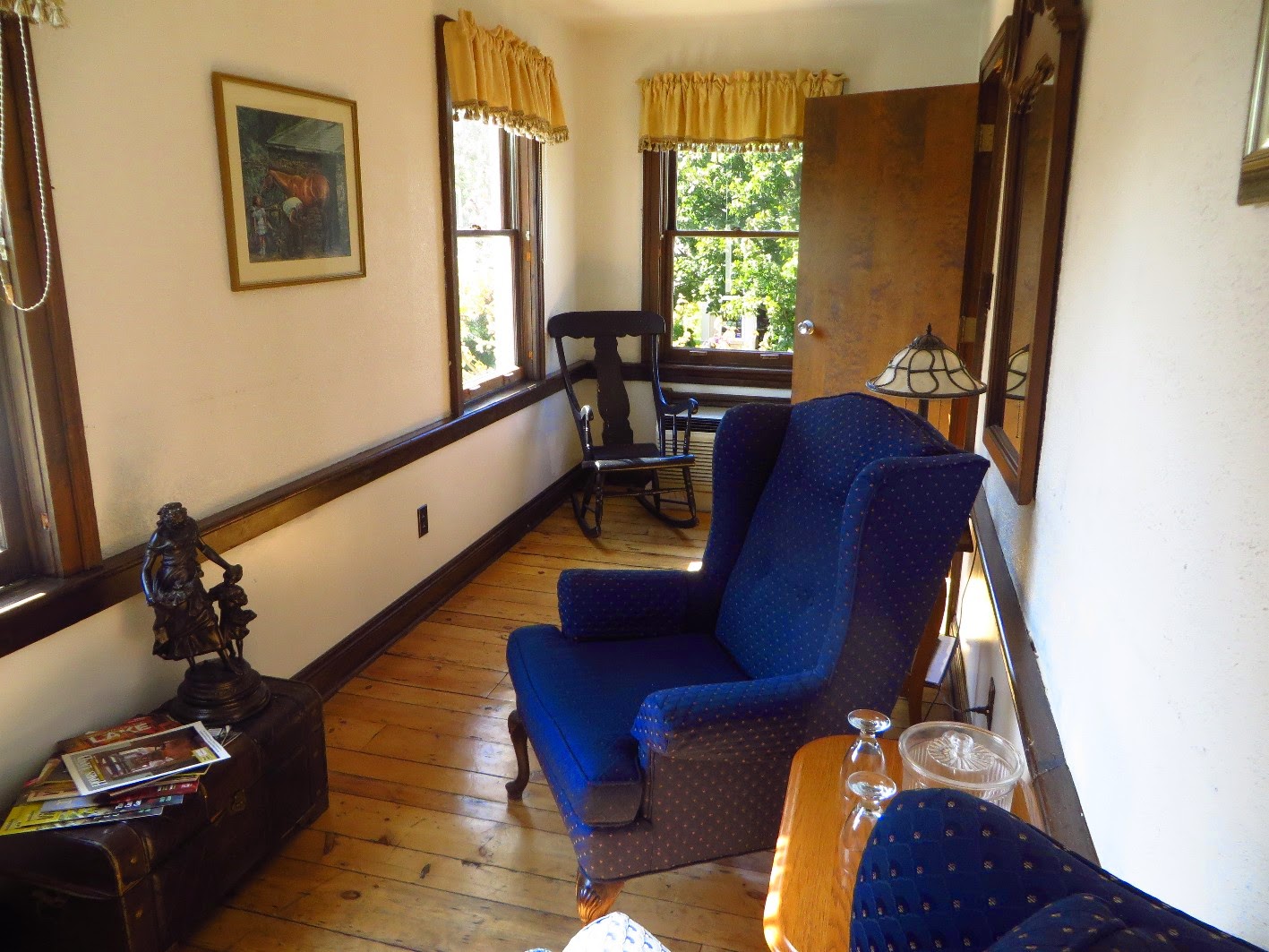 The one bad thing though was that if one of us wanted to use the bathroom, we would have to ask the other what room they wanted to be in as the bathroom was the only way to get between the two rooms.

We both said we would definitely stay over again the next time we are doing an overnight in Niagara-on-the-Lake. The room was clean, comfortable and the inn has done a great job in keeping it's history!

A quick note about the pub. Great beer selection and I have always enjoyed the food. 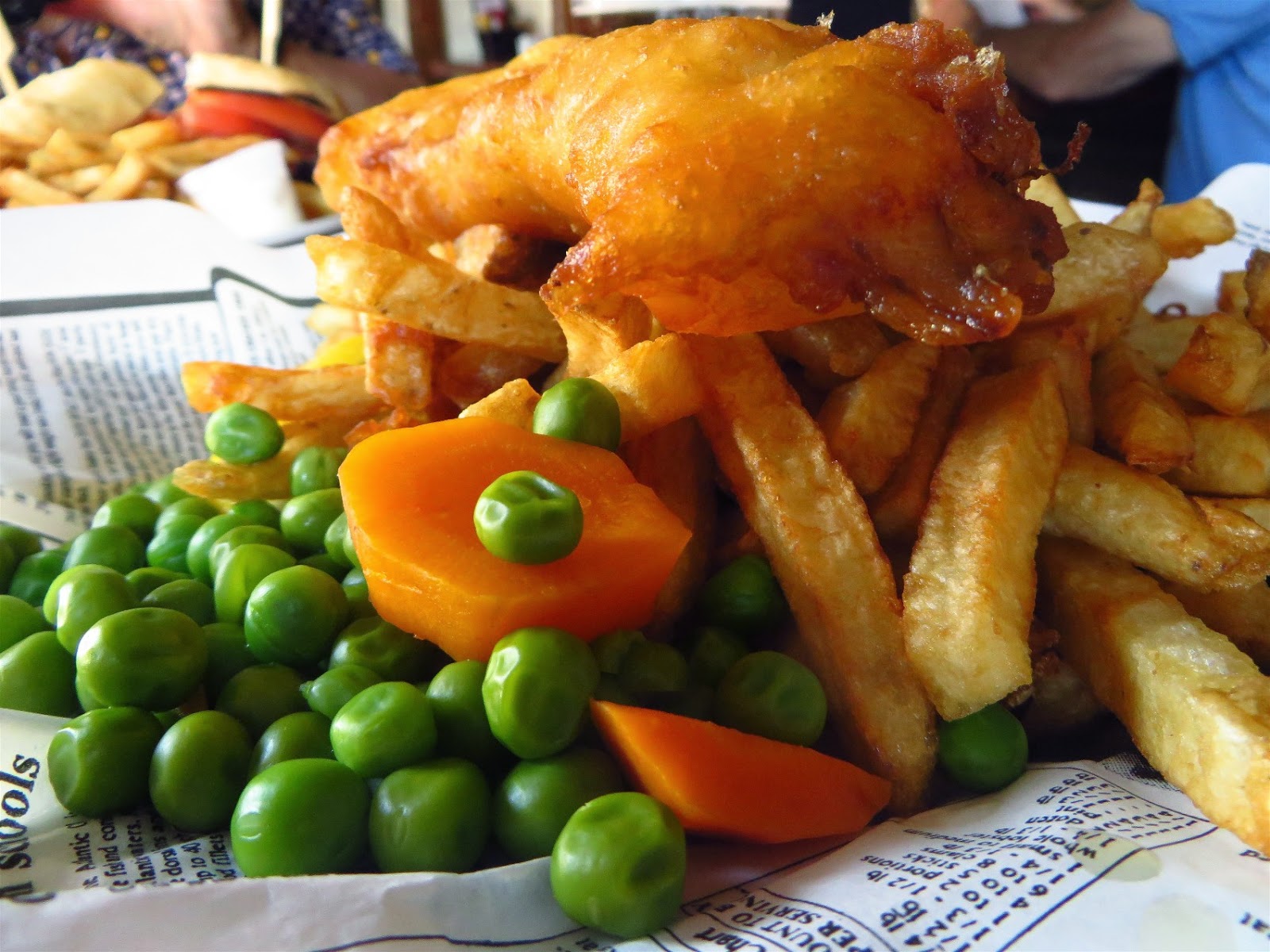 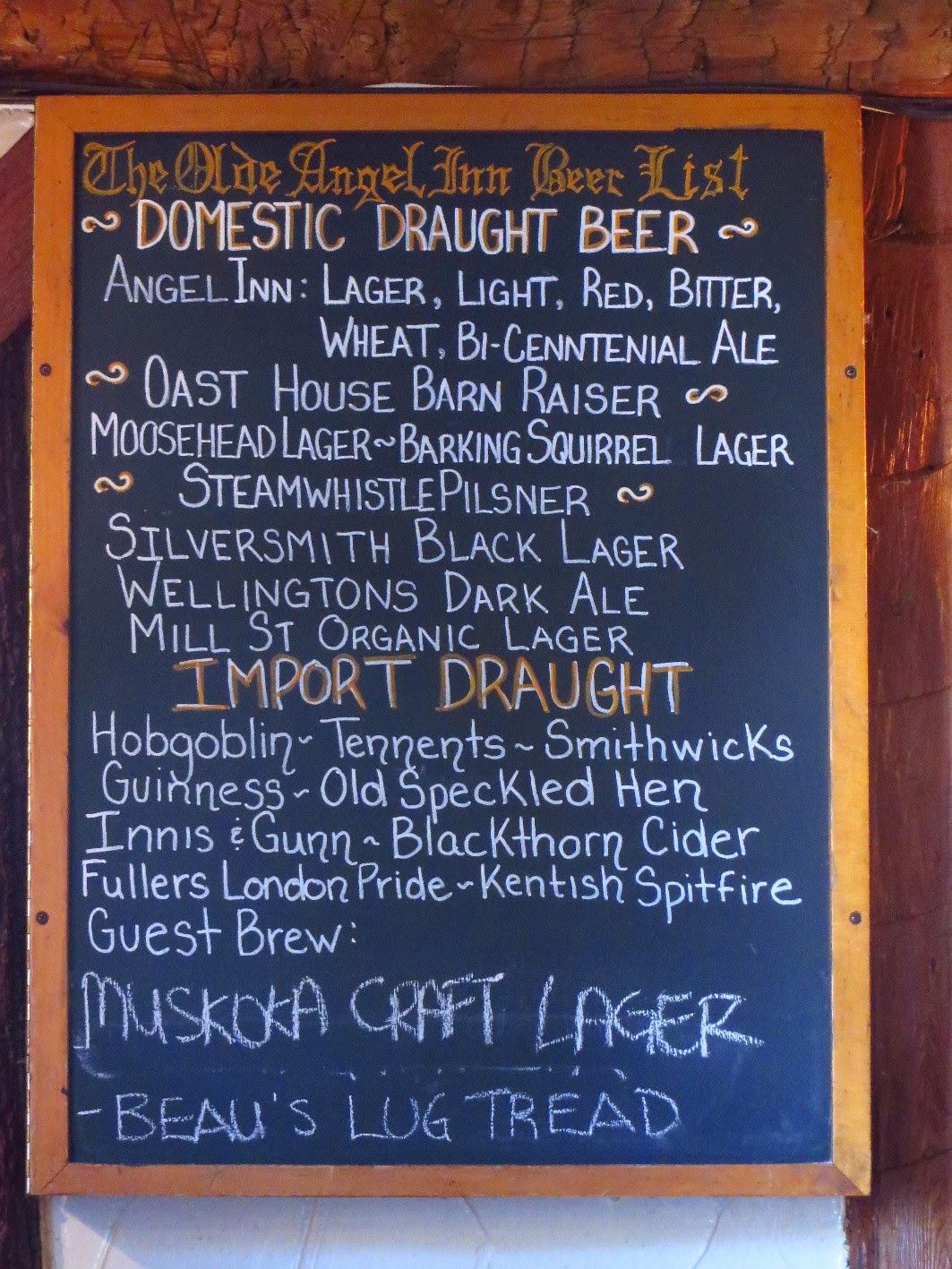