The Friendly Confines of Wrigley Field 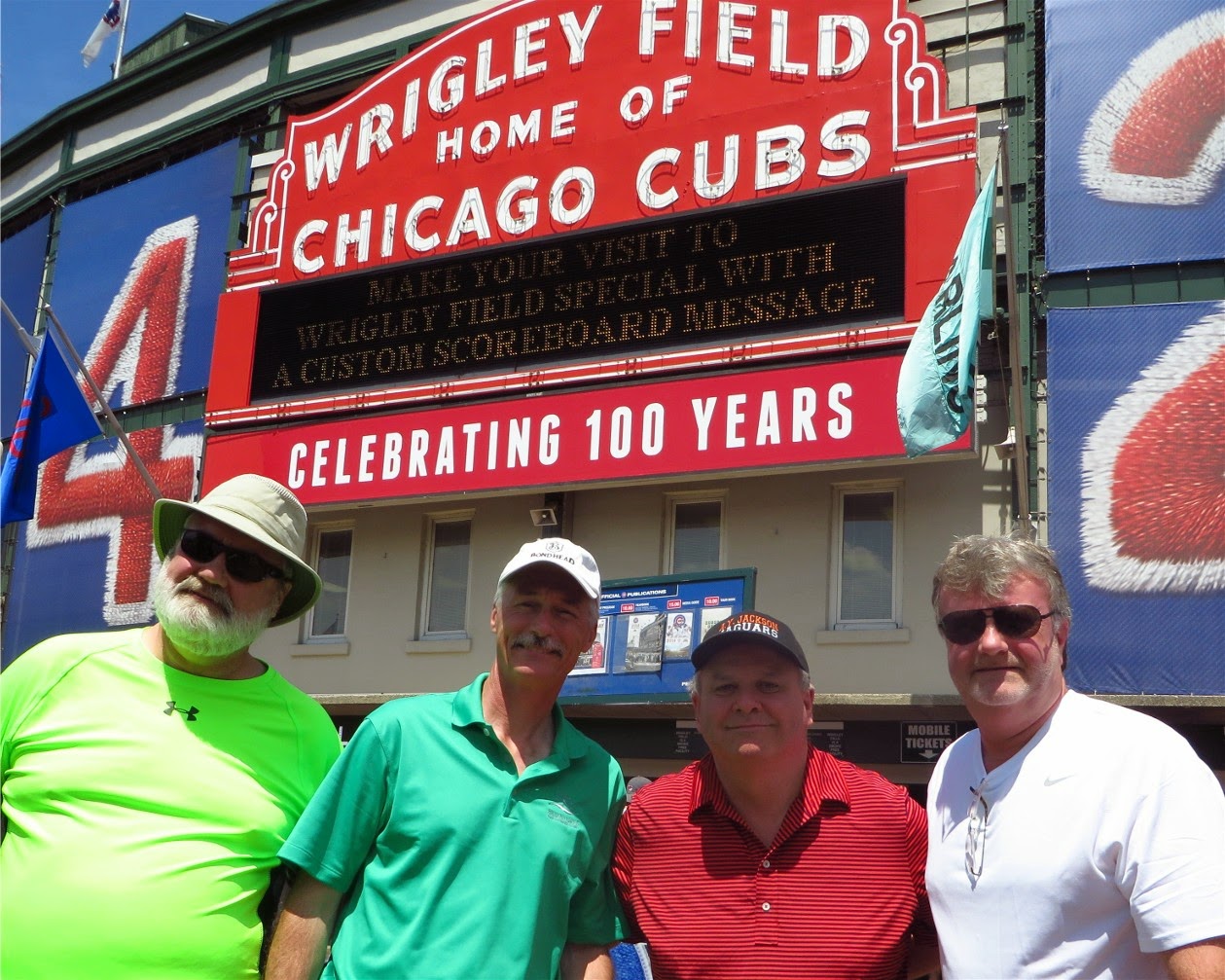 One of the main focuses of our trip to Chicago was to visit the "Friendly Confines" of Wrigley Field.  This year it is celebrating its 100th anniversary. Ernie Banks, who played 18 years for the Cubs dubbed it "The Friendly Confines", a phrase that Cubs announcer Harry Caray used every game to start his broadcasts.

Outside the stadium stand a statue of Harry Caray. The reason he is holding his microphone out is that during the 7th inning stretch he would hold his microphone out of the broadcast booth so the radio audience could hear the fans sing "Take Me Out to the Ballgame". 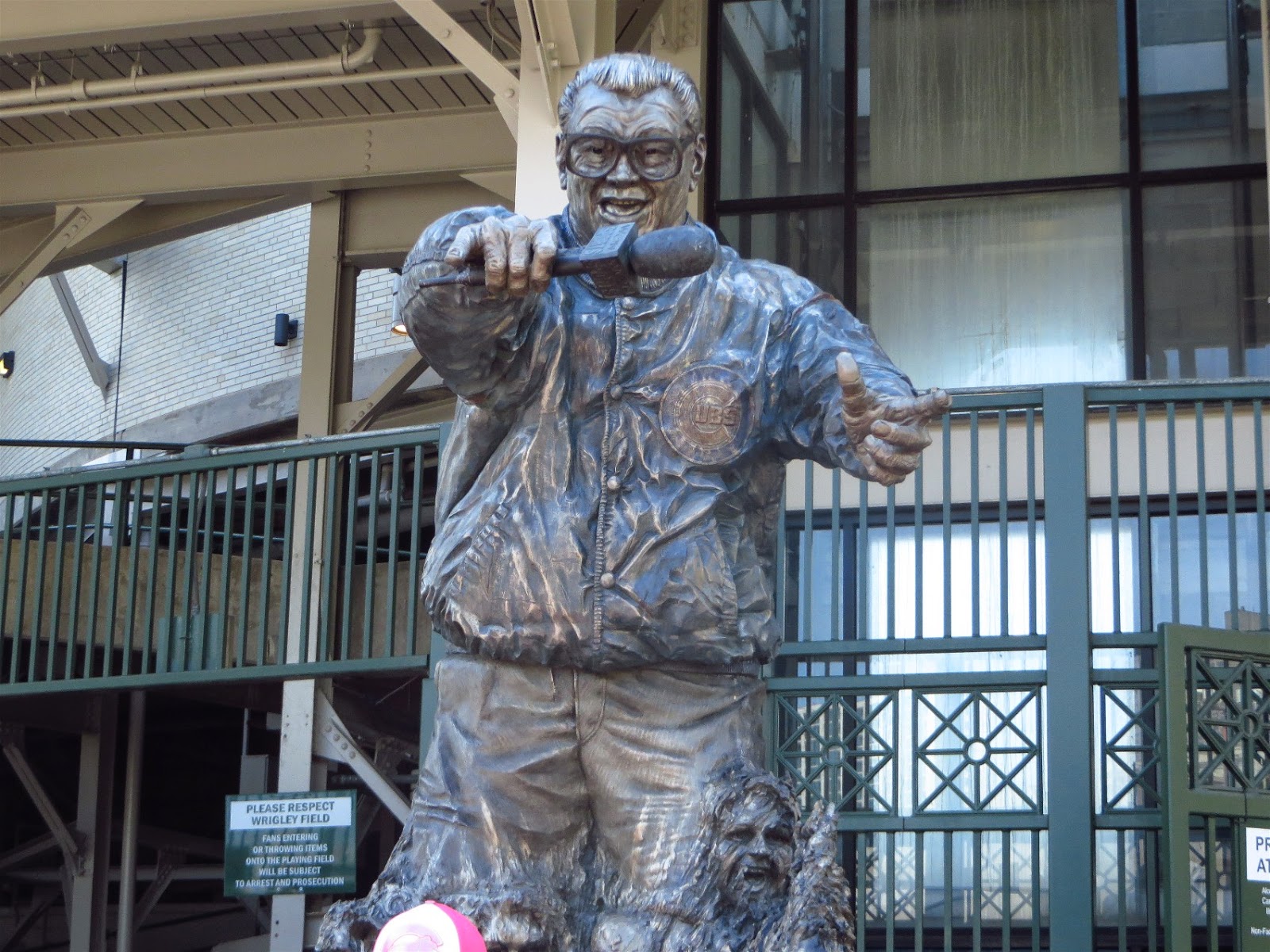 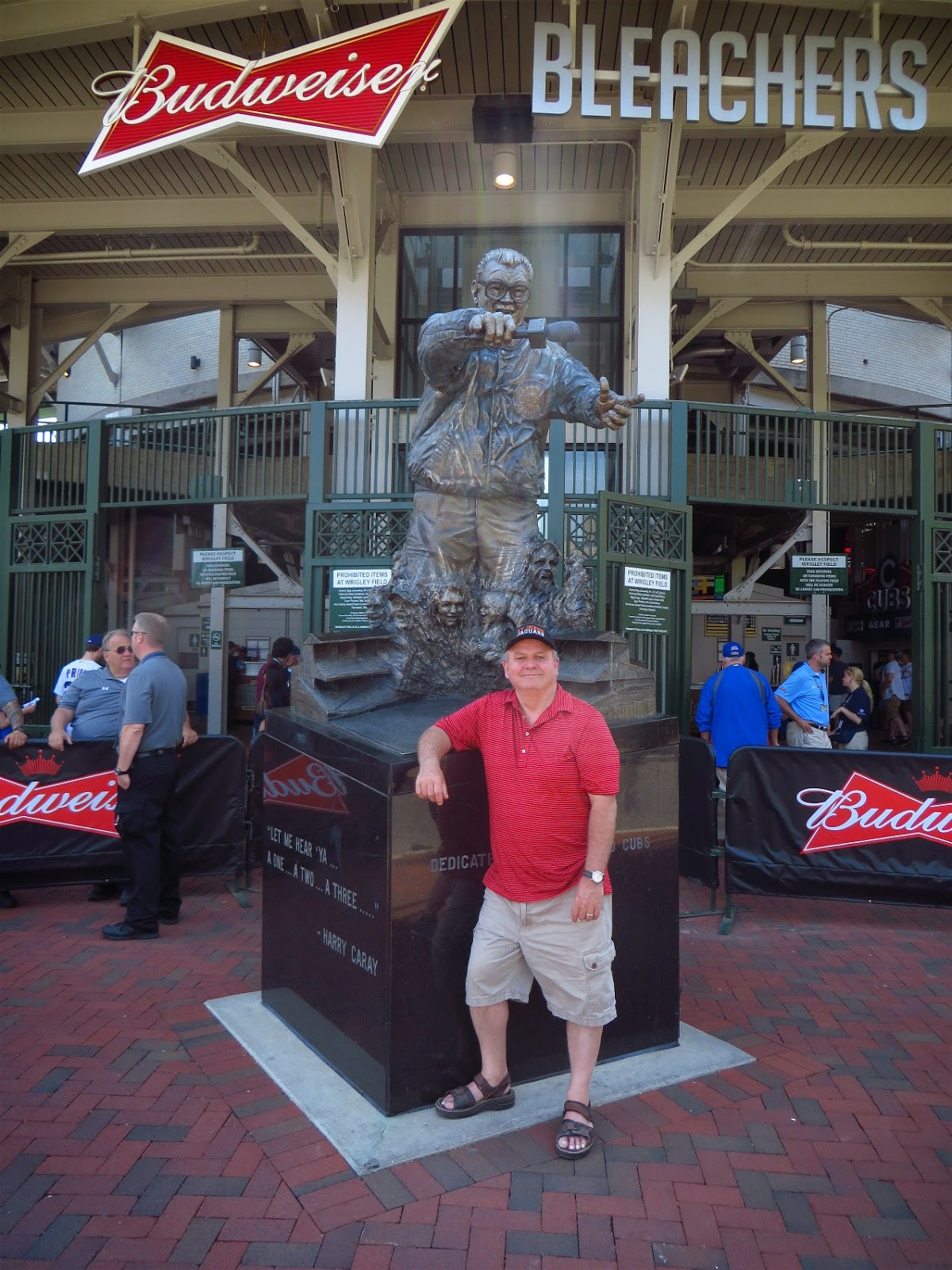 Here is an old shot of Wrigley that is painted on the outside wall. There are lots of cool old pictures on display everywhere inside and outside of the stadium. 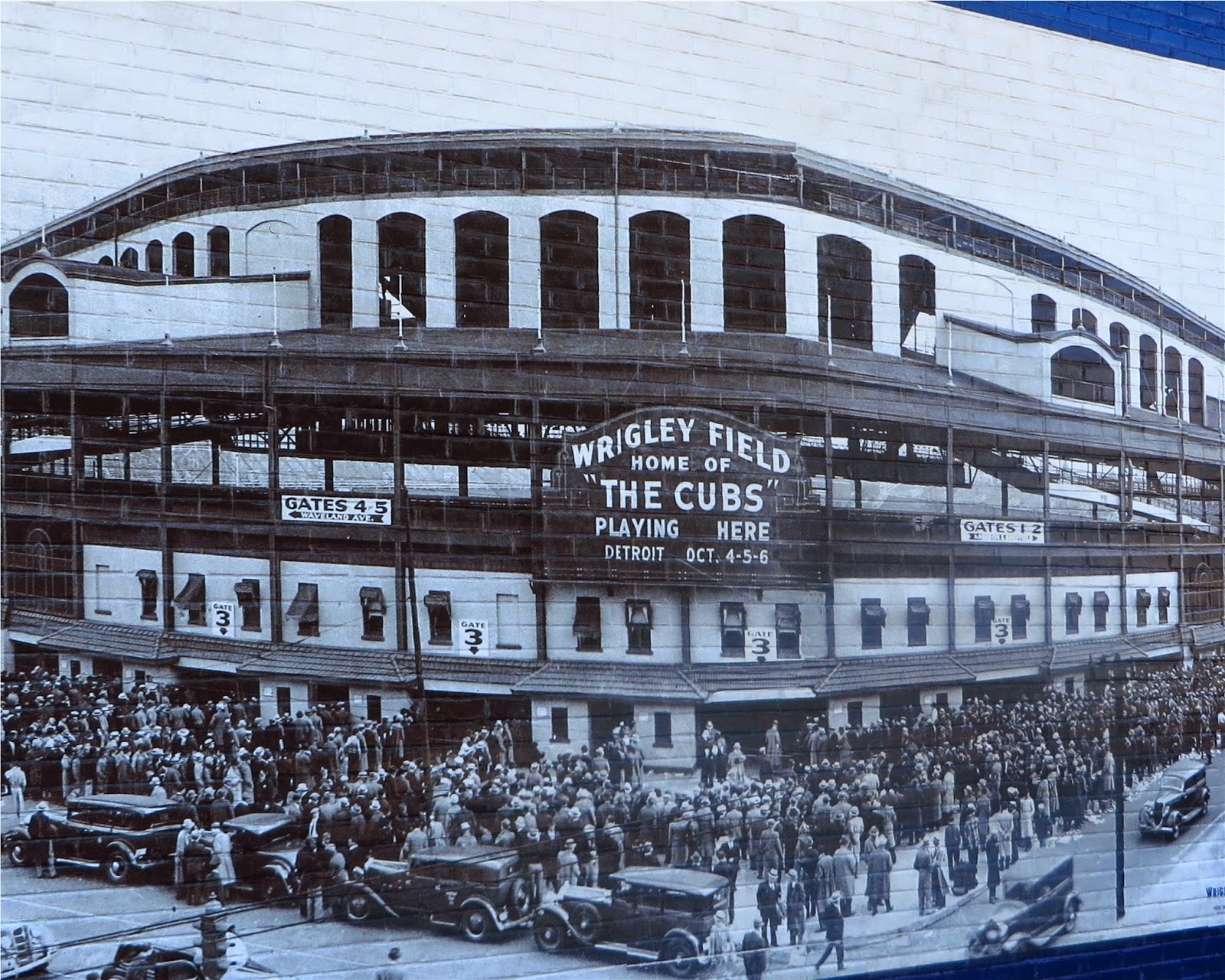 Here we are resting before going in at the Captain Morgan Club. The club is open during the game to ticket holders who can go in and out during the game. 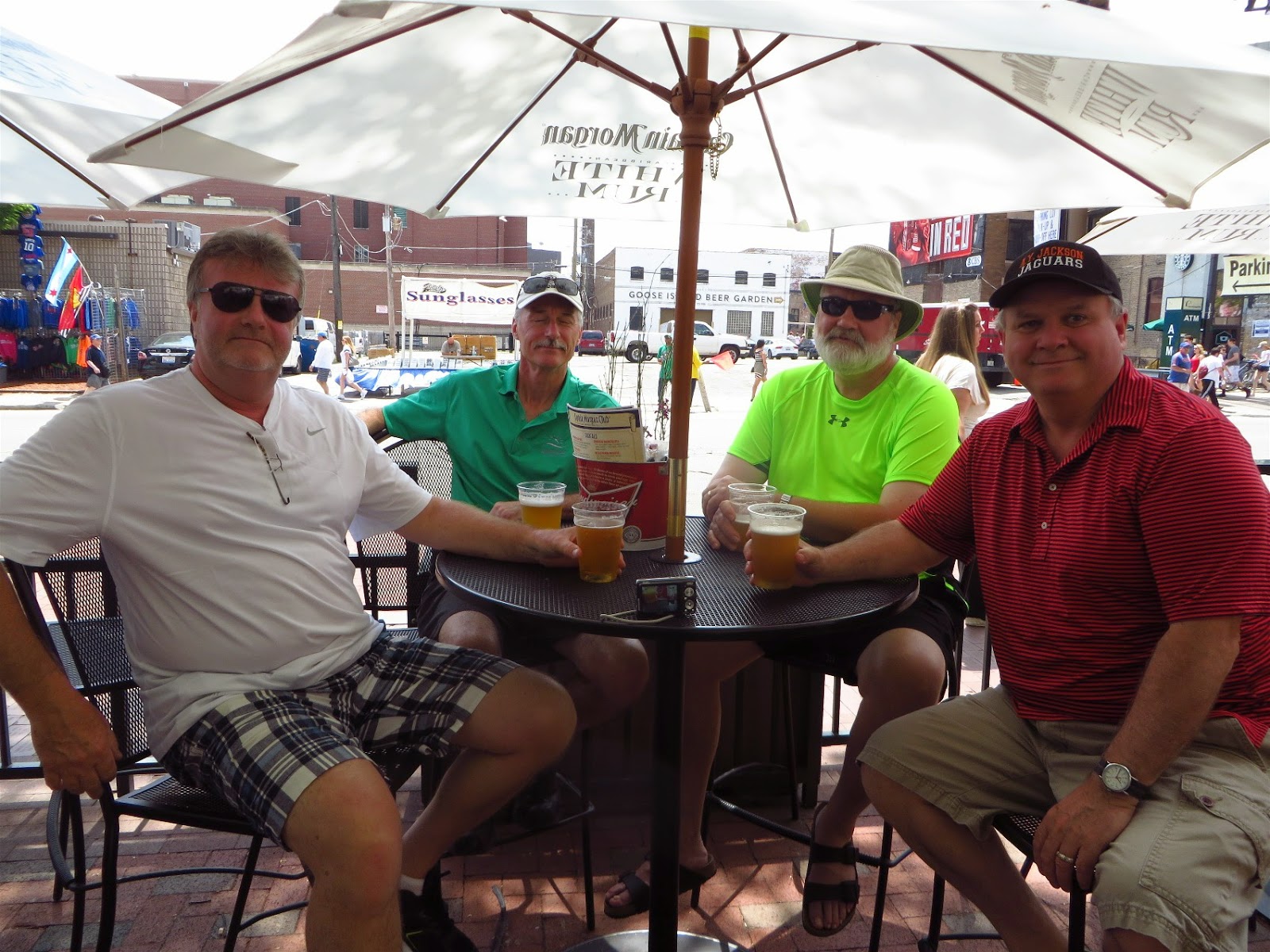 We had bleacher seats for today with a great view of the field. It is general admission seating, not assigned, so two of us would explore with the other two saving the seats. 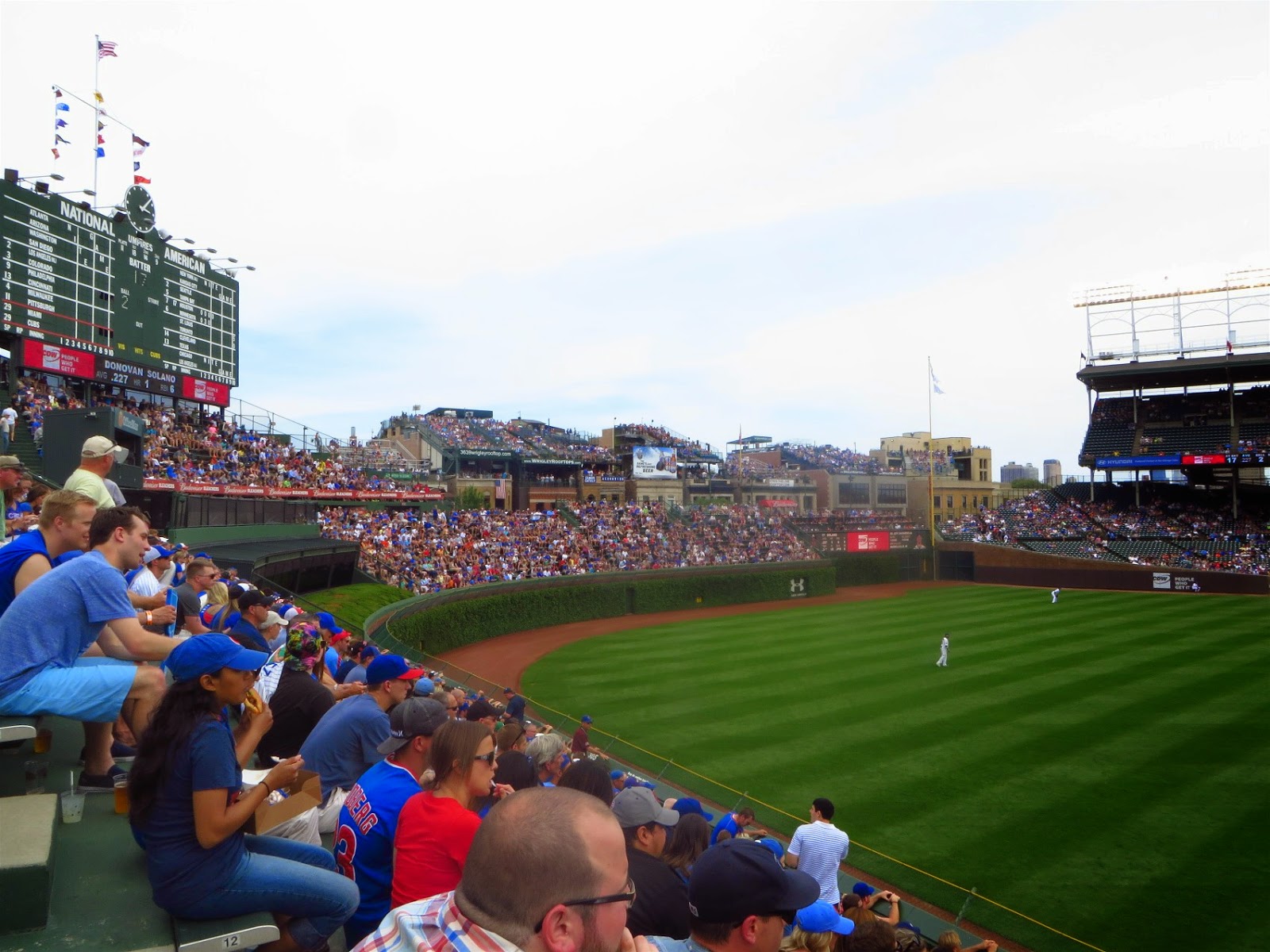 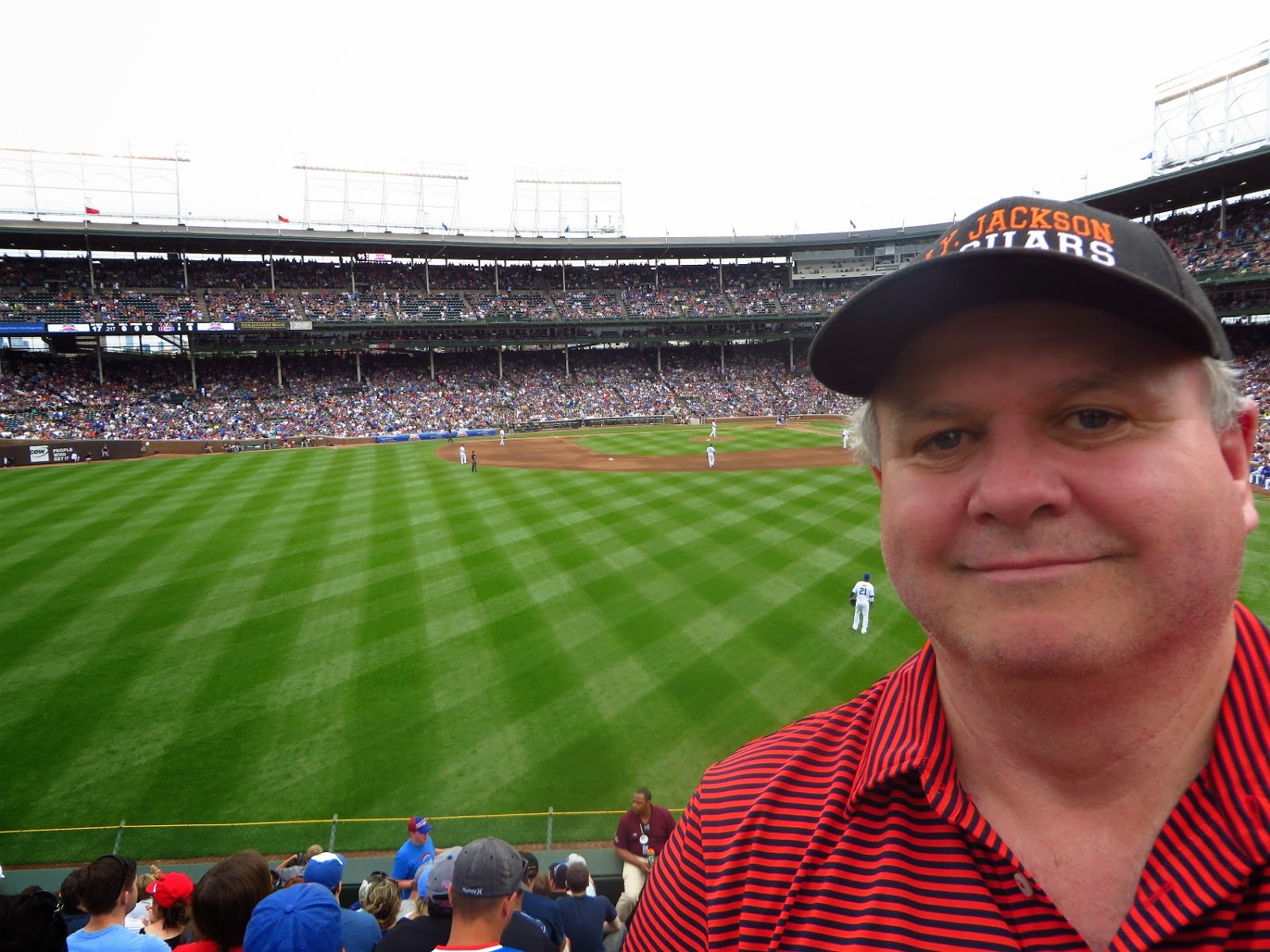 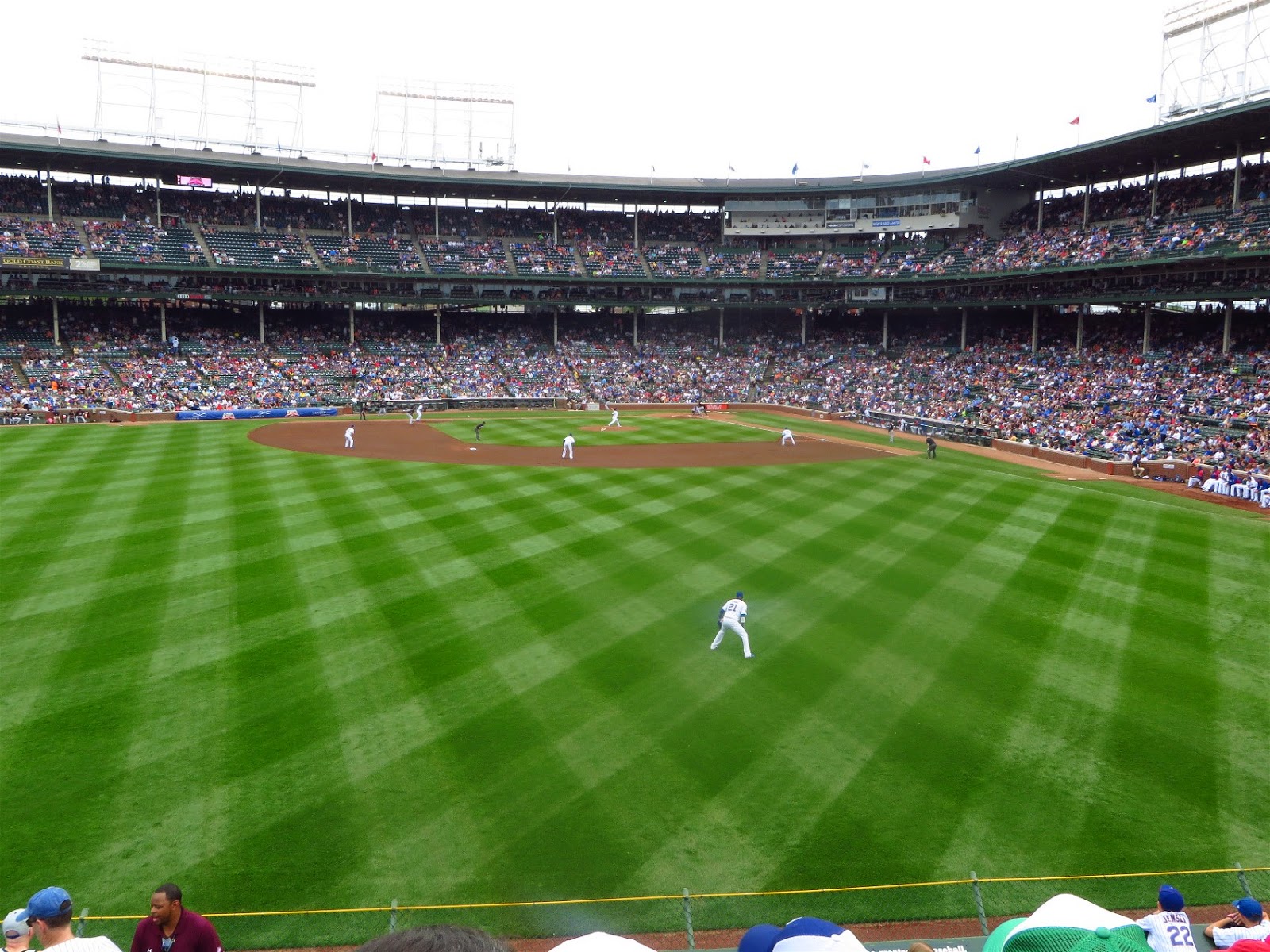 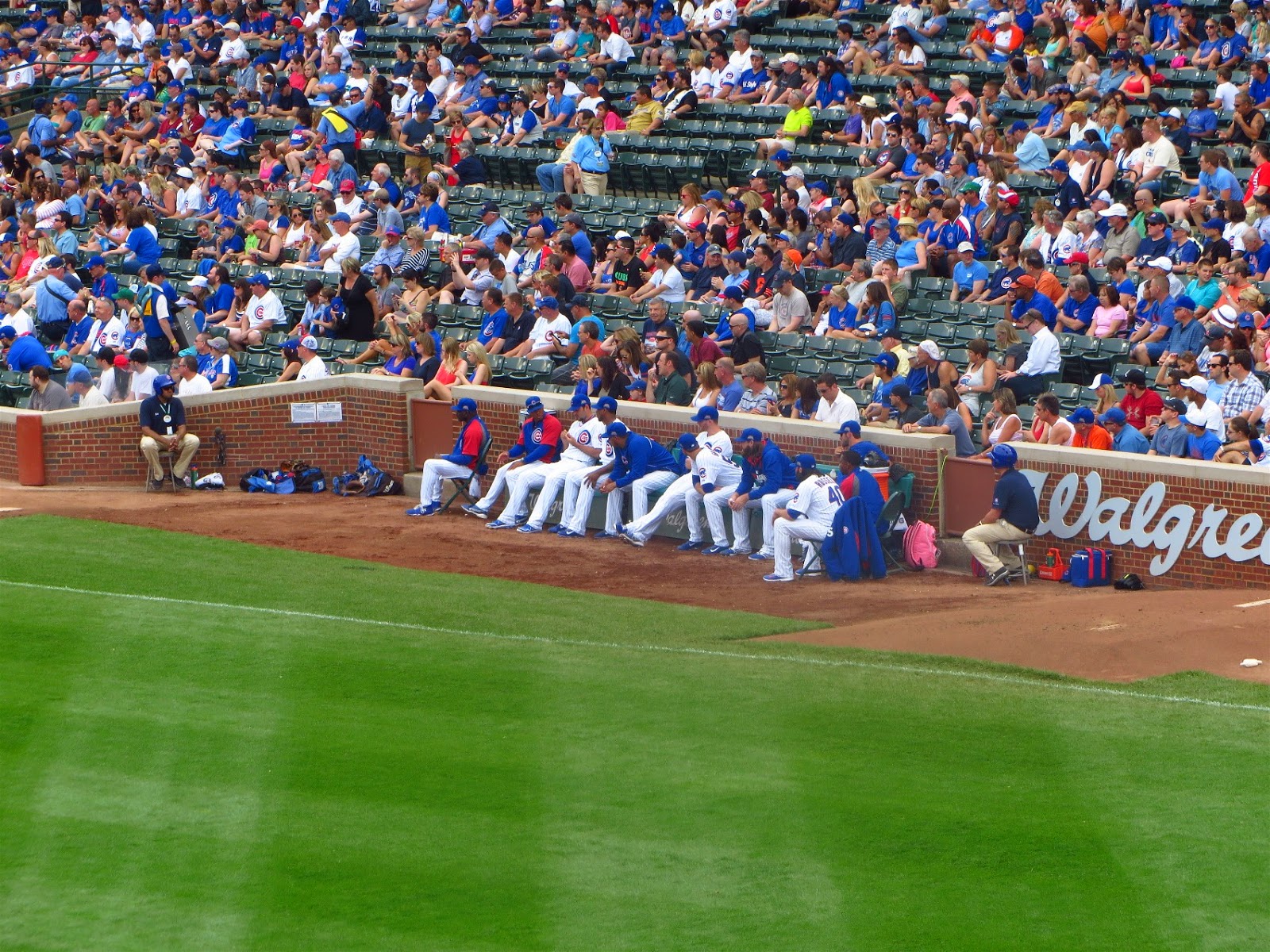 Alfred and Kevin chat while Craig and I toured. They were easy to spot in their bright shirts. 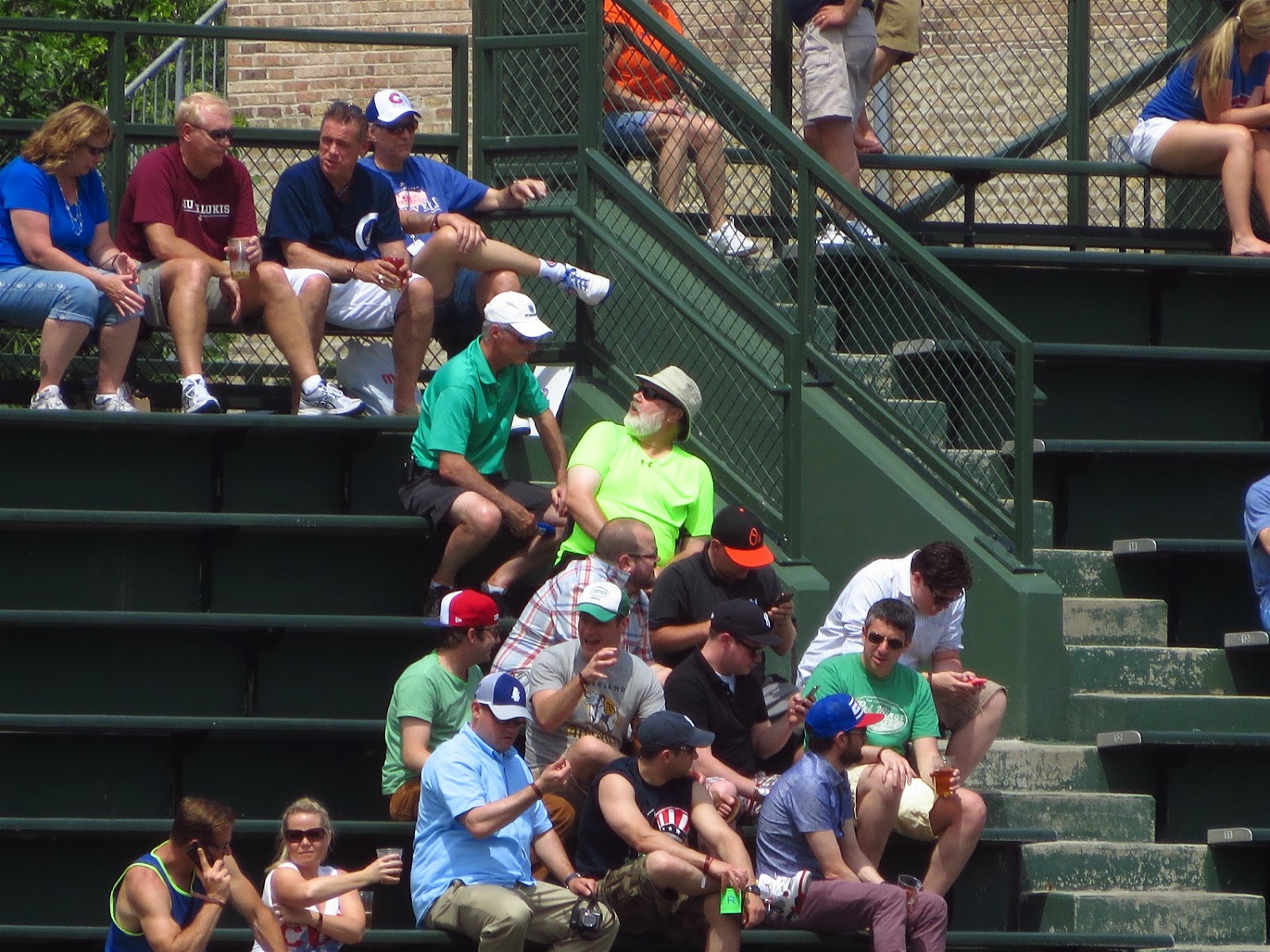 First pitch of the game. 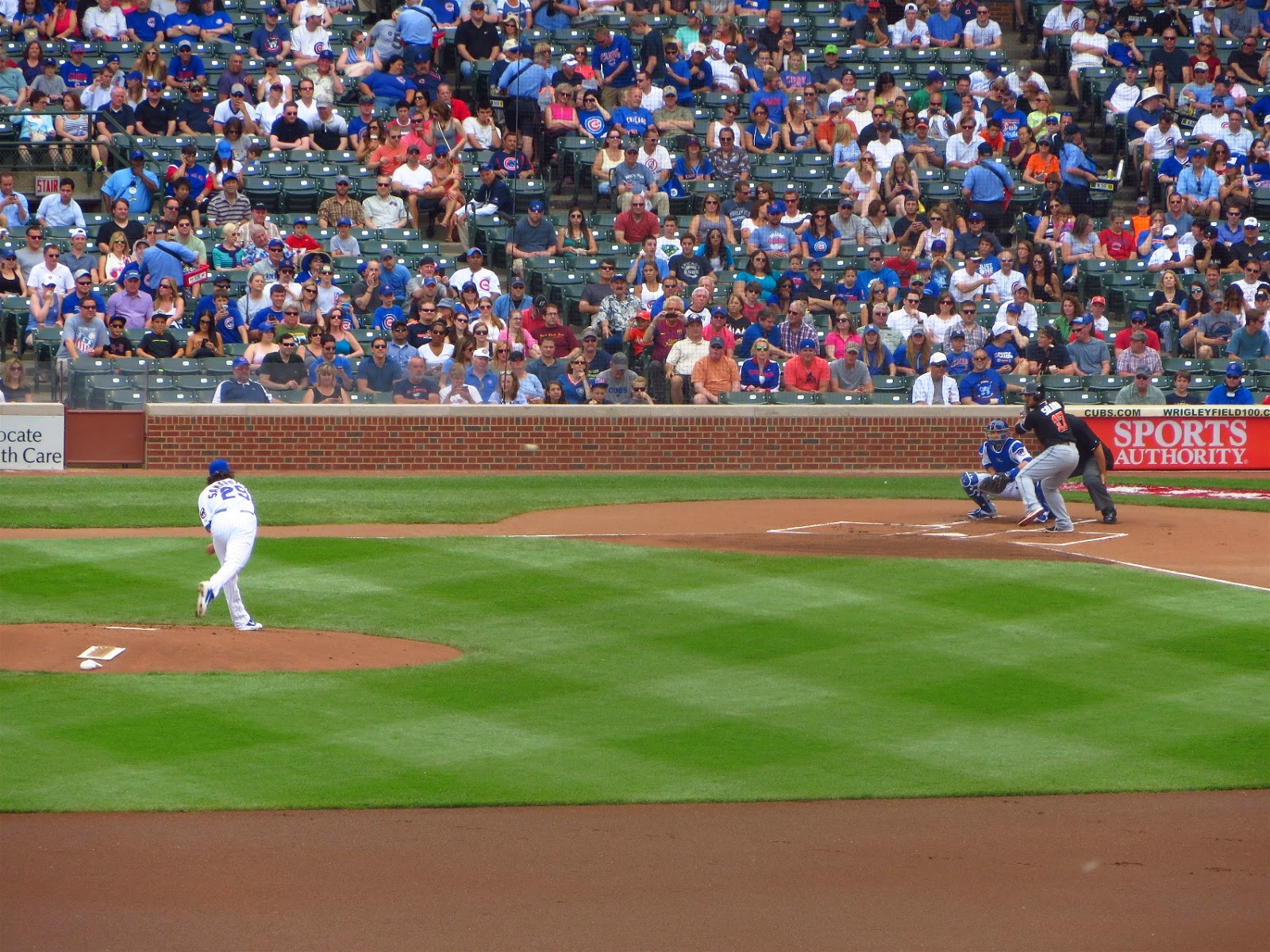 On the rooftops of the houses across the street from the stadiums outfield, more stands have been built. They are owned by the homeowners but give a portion of the revenue from their seat sales to the Cubs. 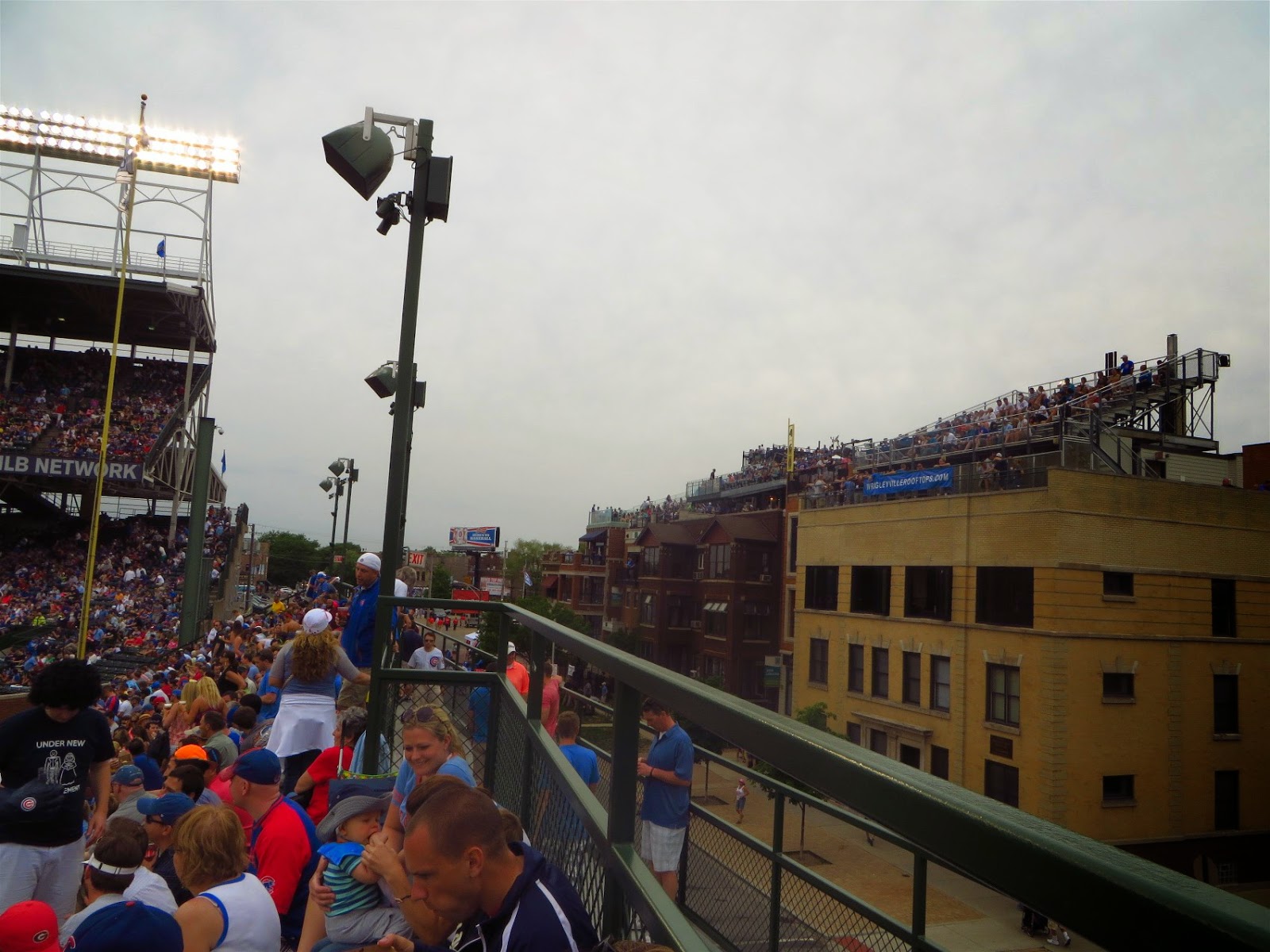 Under the bleachers, fans can watch the players work on their swing inside. I'm not sure if any other stadium does this but it is a great fan friendly feature. 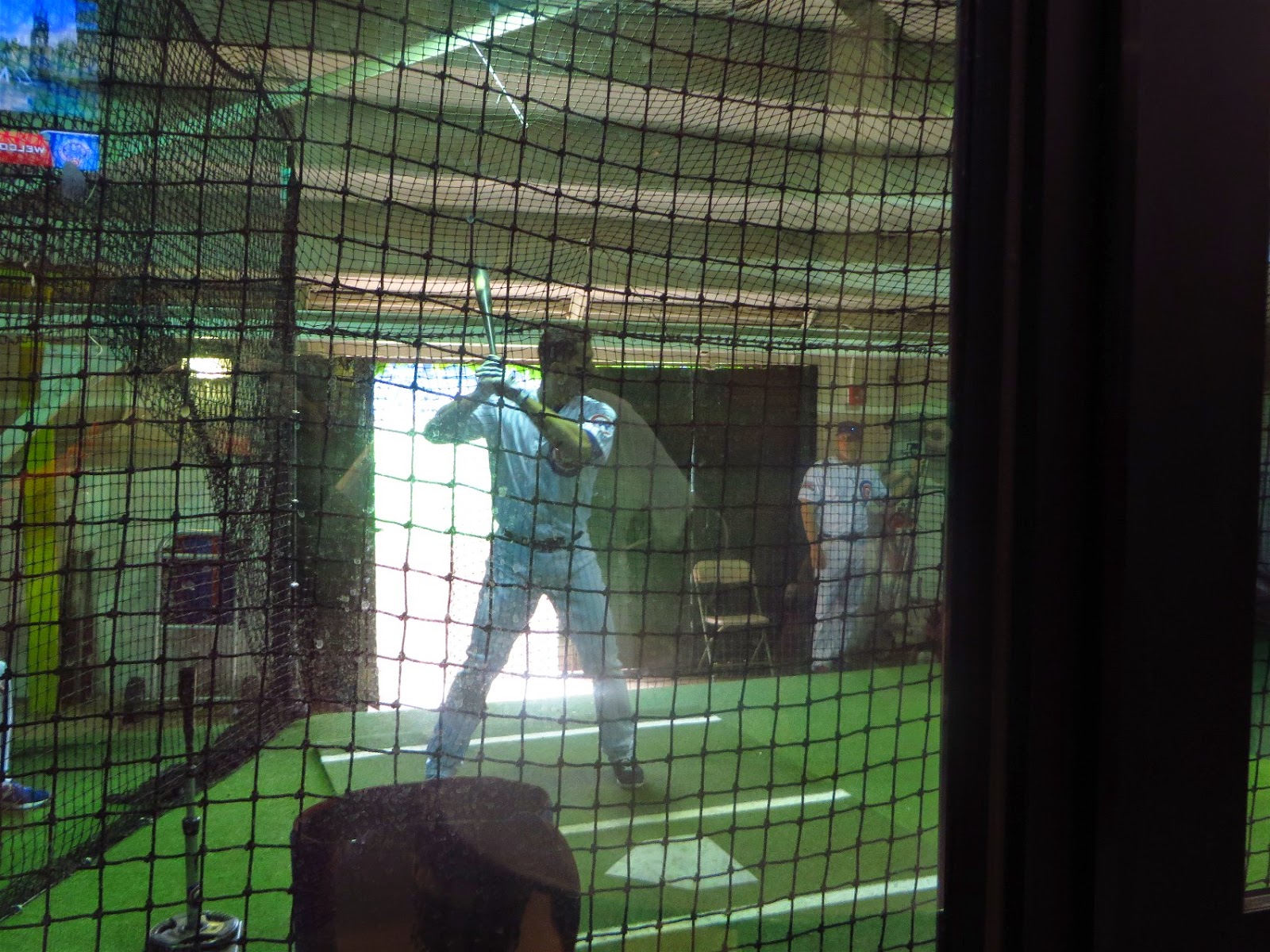 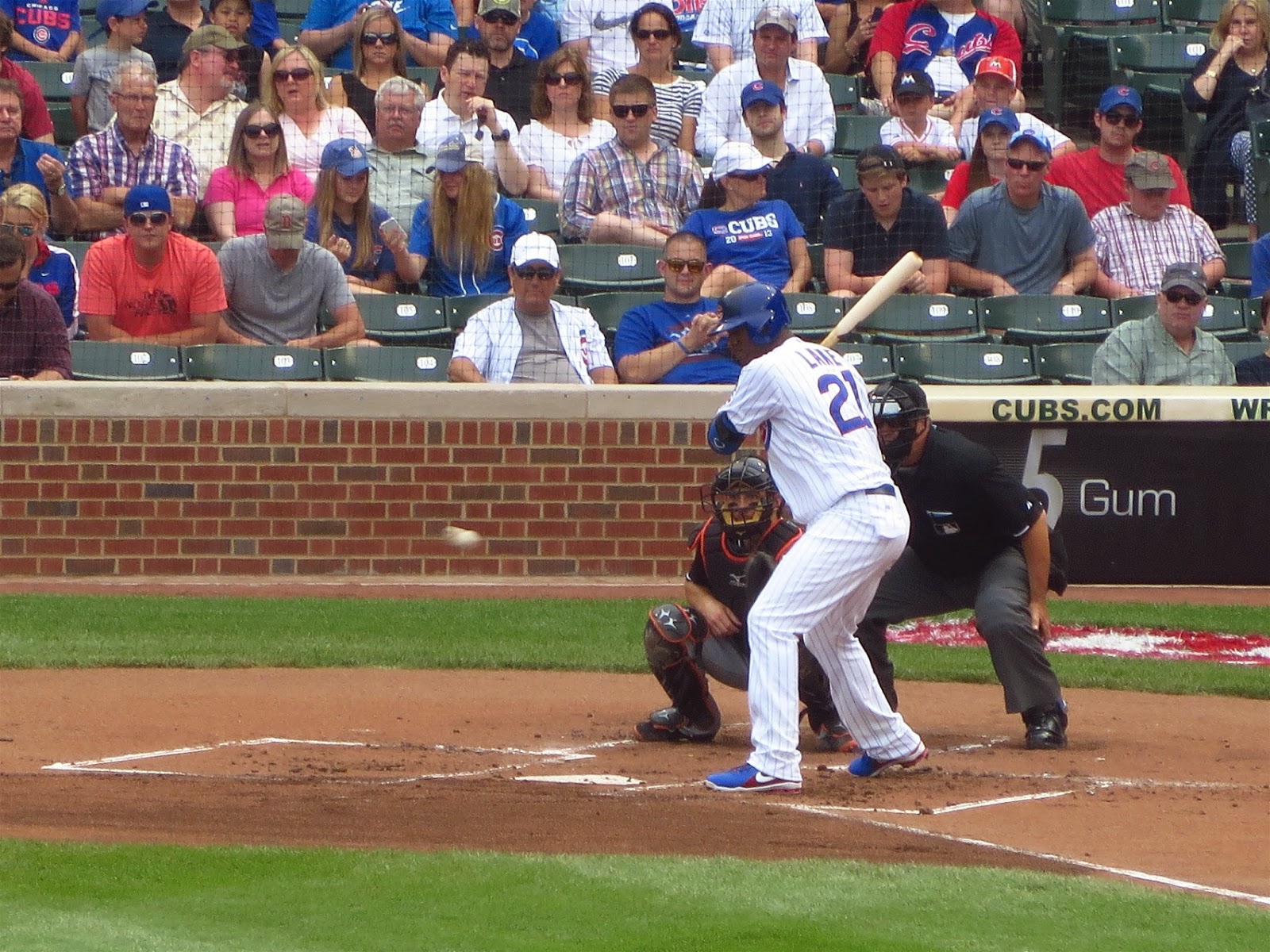 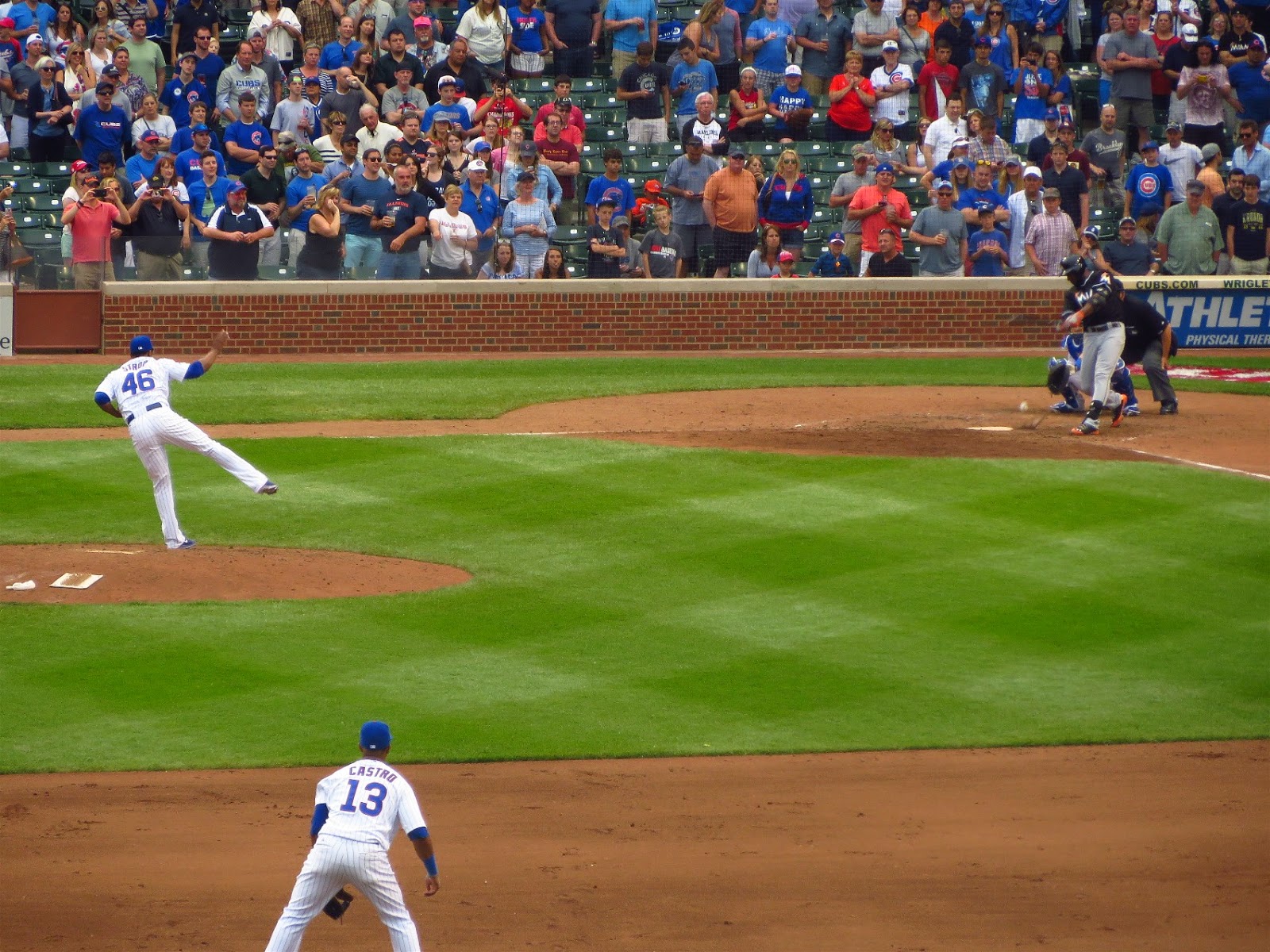 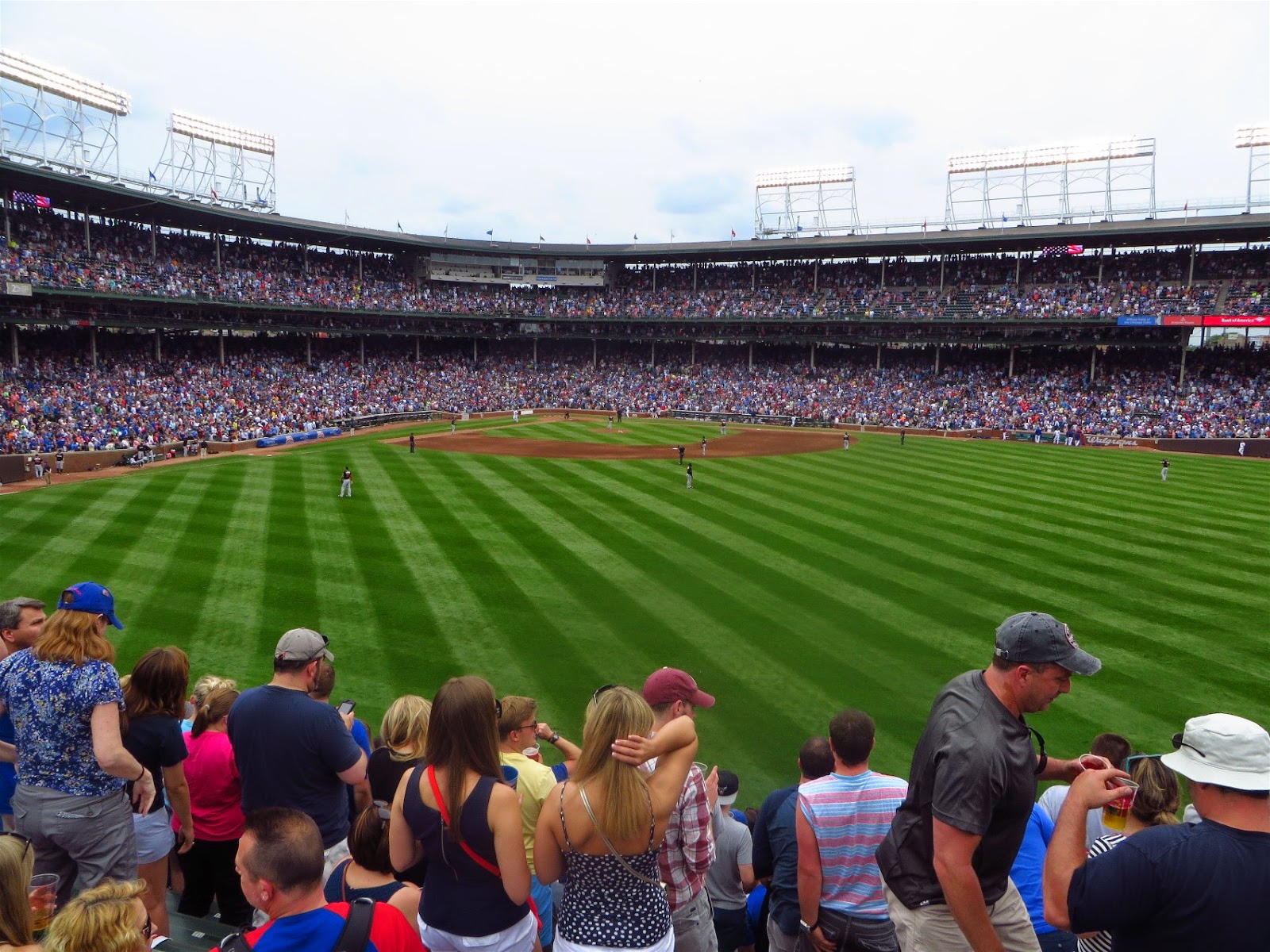 The scoreboard is manually operated. Here the crew watches the game. 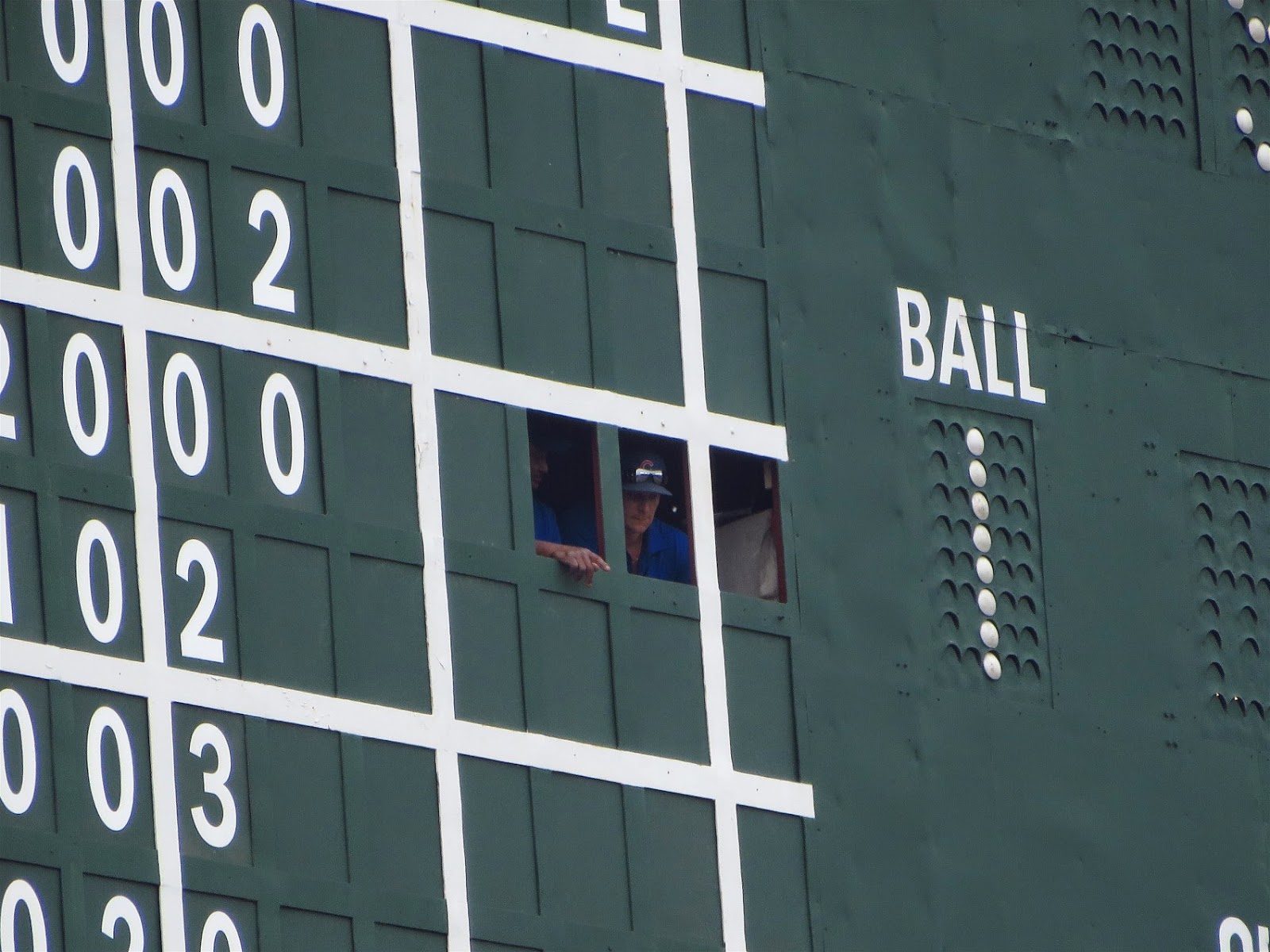 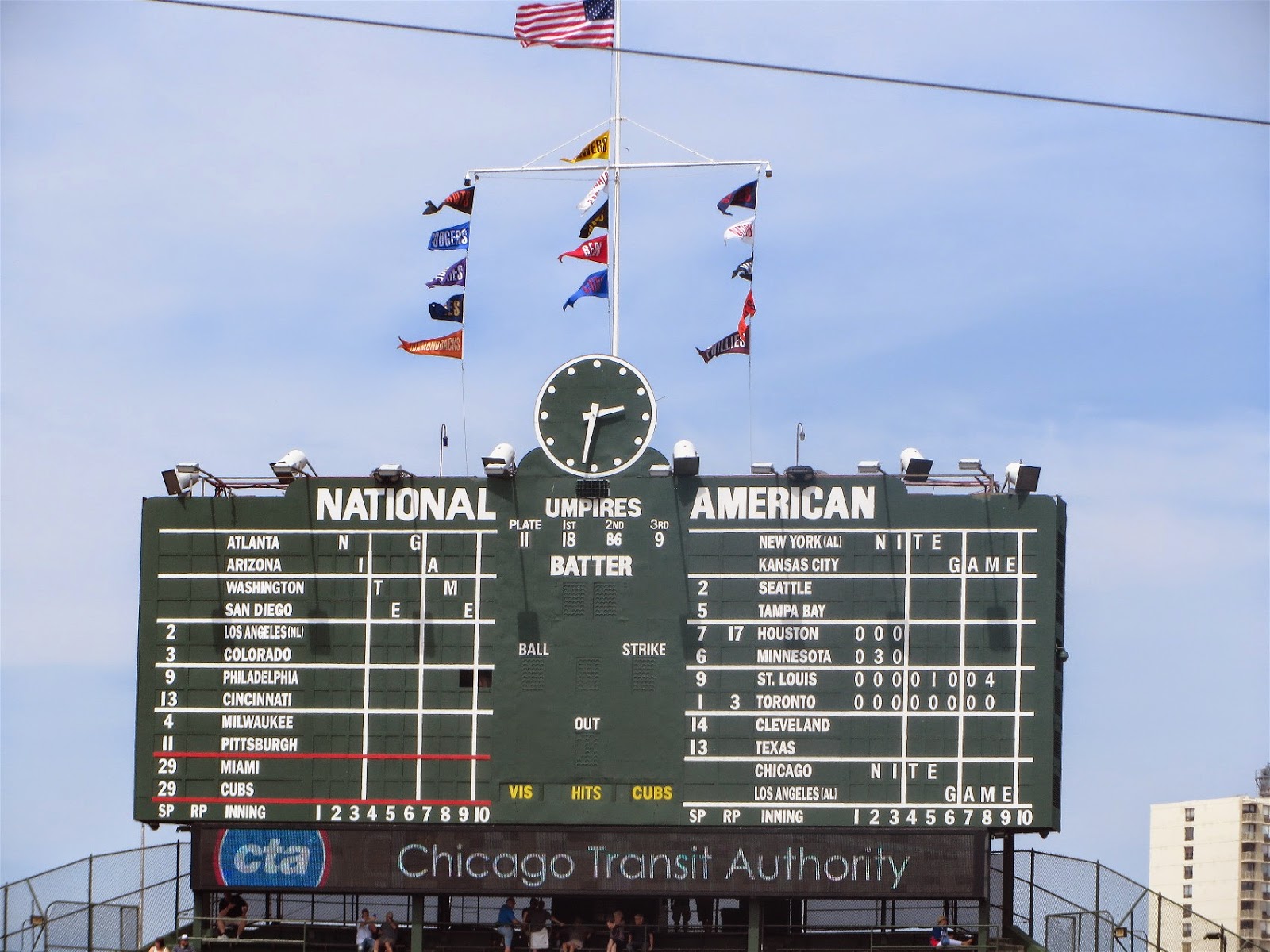 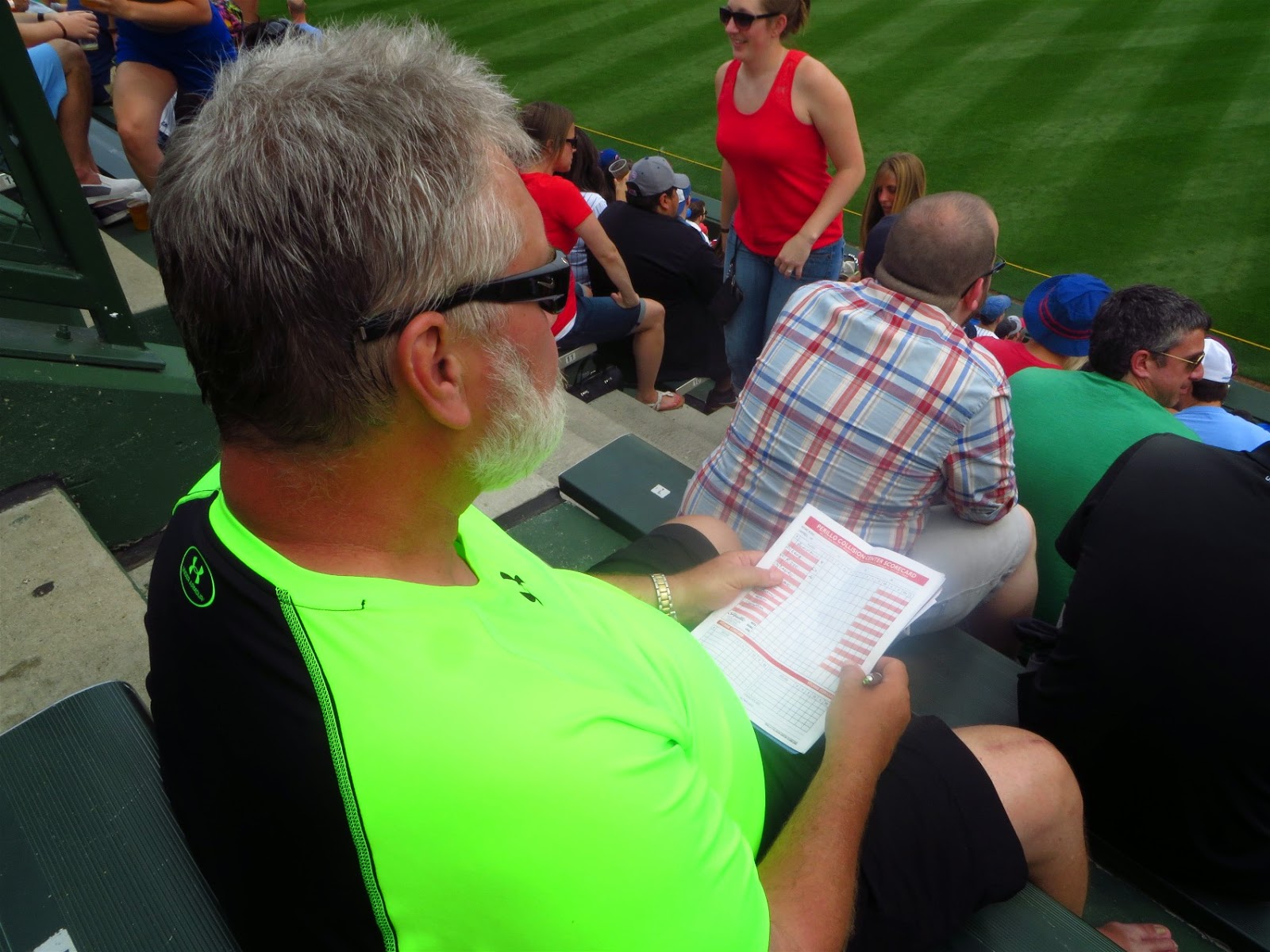 The fans in the bleachers were fun. I would sit there again. Today there were 18 guys there for the start of a stag weekend plus at least two stagettes. Here is the soon-to-be-bride of one of them. 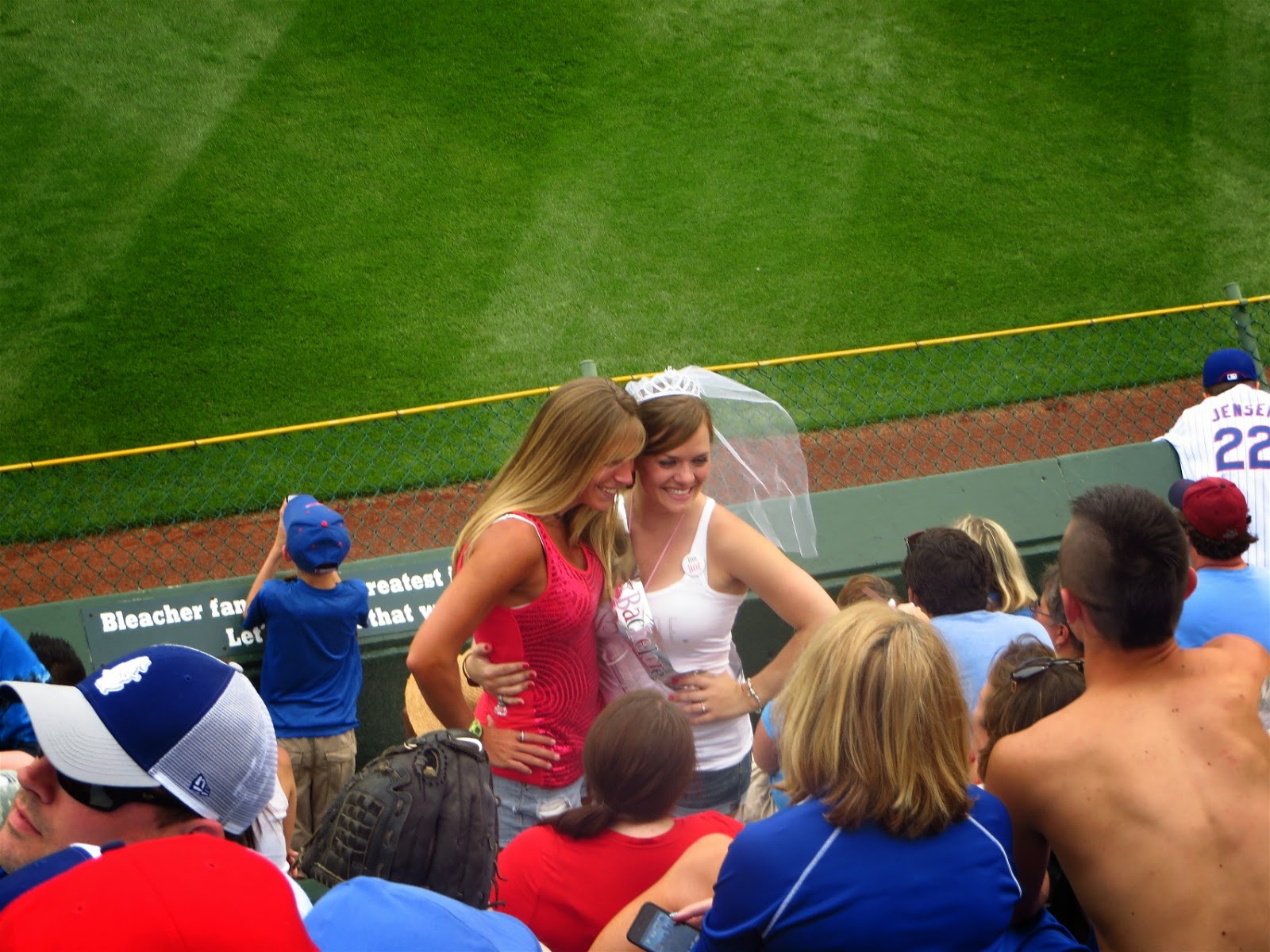 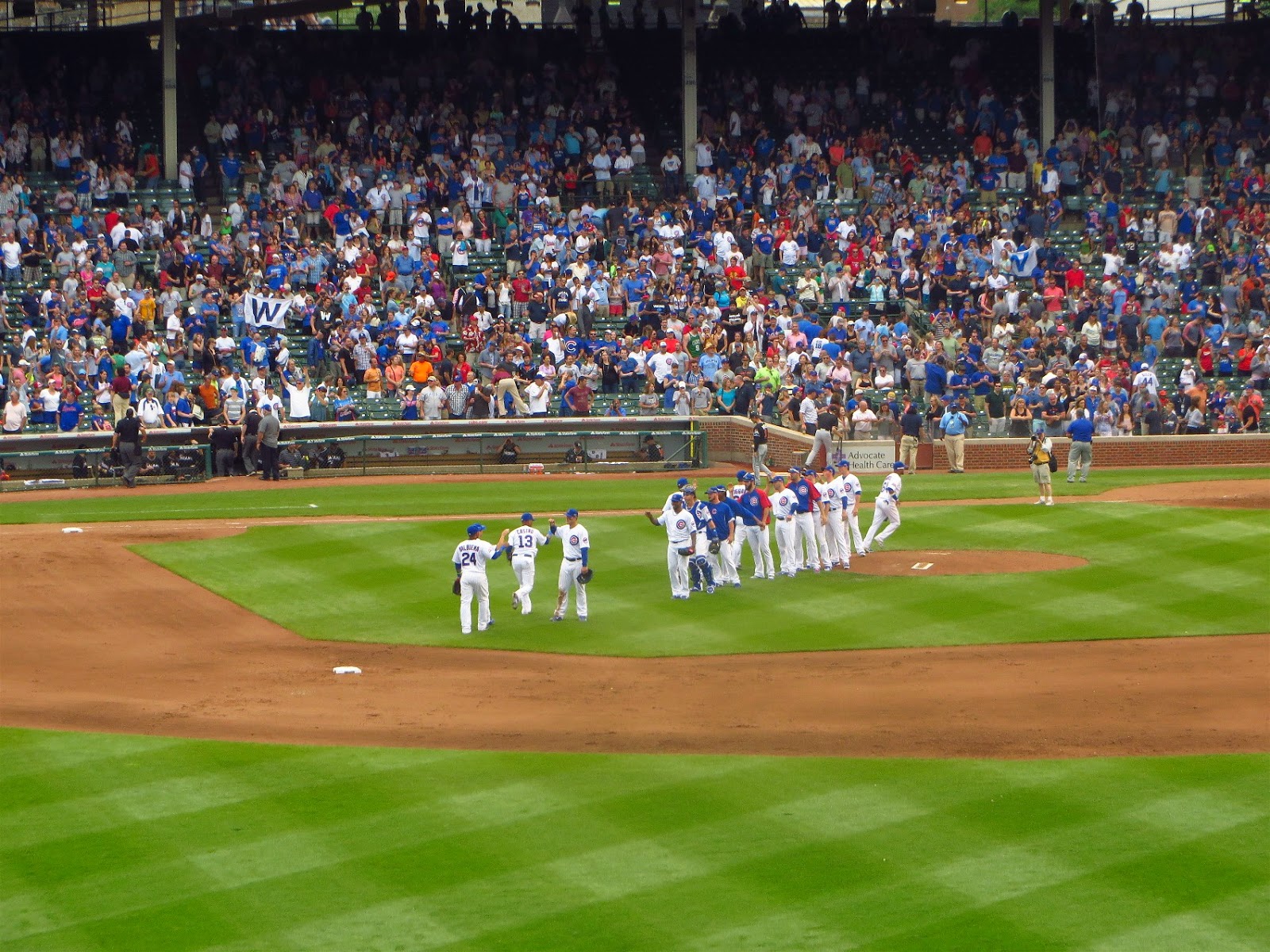 33, 786 fans were at the game. If you look at the picture above, the game is over and they aren't leaving. Why? When the Cubs win, everybody stays to sing along with "Go Cubs Go!"


Here's the view of Wrigley from the Red Line platform. I am so glad we have tickets for tomorrow! 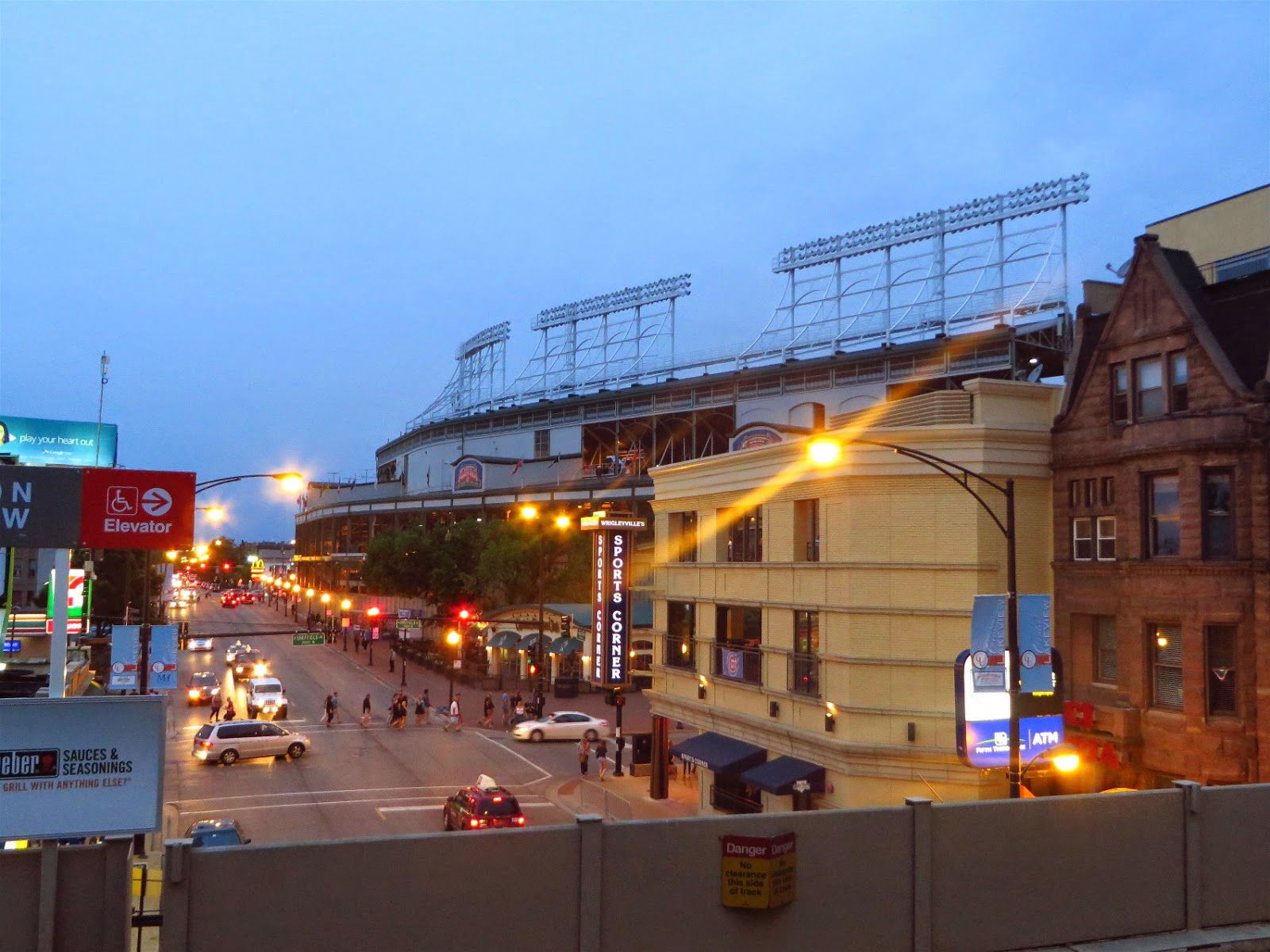