Jane's Walk - Visions of Parkdale Past and Future 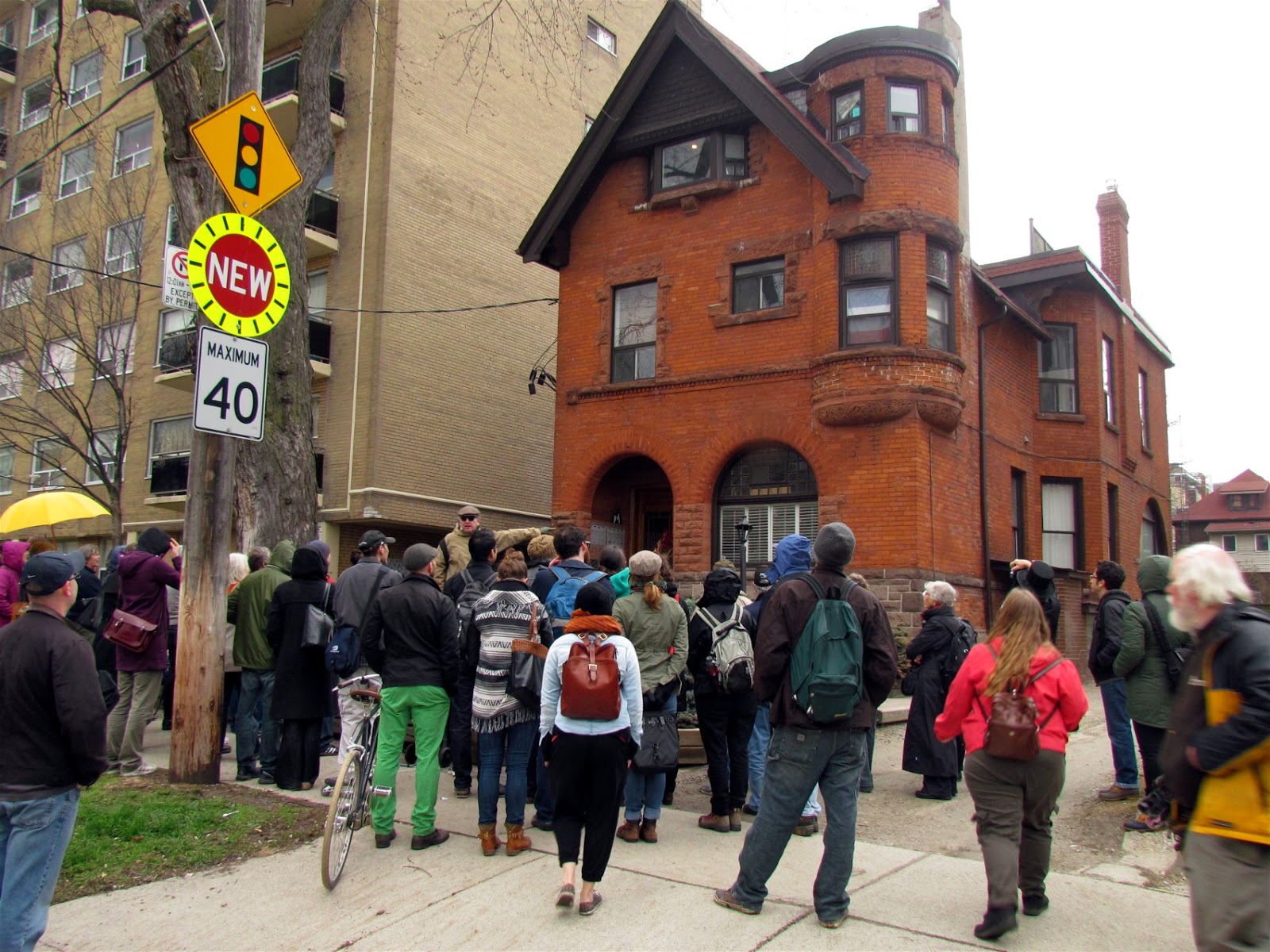 On the first weekend of May, Toronto hosts a series of  Jane's Walks.

Jane Jacobs (1916-2006) was an urbanist and activist whose writings championed a fresh, community-based approach to city building. She had no formal training as a planner, and introduced ground-breaking ideas about how cities function, evolve and fail that now seem like common sense to generations of architects, planners, politicians and activists. Jacobs saw cities as ecosystems that had their own logic and dynamism which would change over time according to how they were used. She promoted higher density in cities, short blocks, local economies and mixed uses. Jacobs helped derail the car-centred approach to urban planning in both New York and Toronto, invigorating neighbourhood activism by helping stop the expansion of expressways and roads.

She lived in Greenwich Village for decades, then moved to Toronto in 1968 where she continued her work and writing until her death in April 2006. A firm believer in the importance of local residents having input on how their neighbourhoods develop, Jacobs encouraged people to familiarize themselves with the places where they live, work and play. 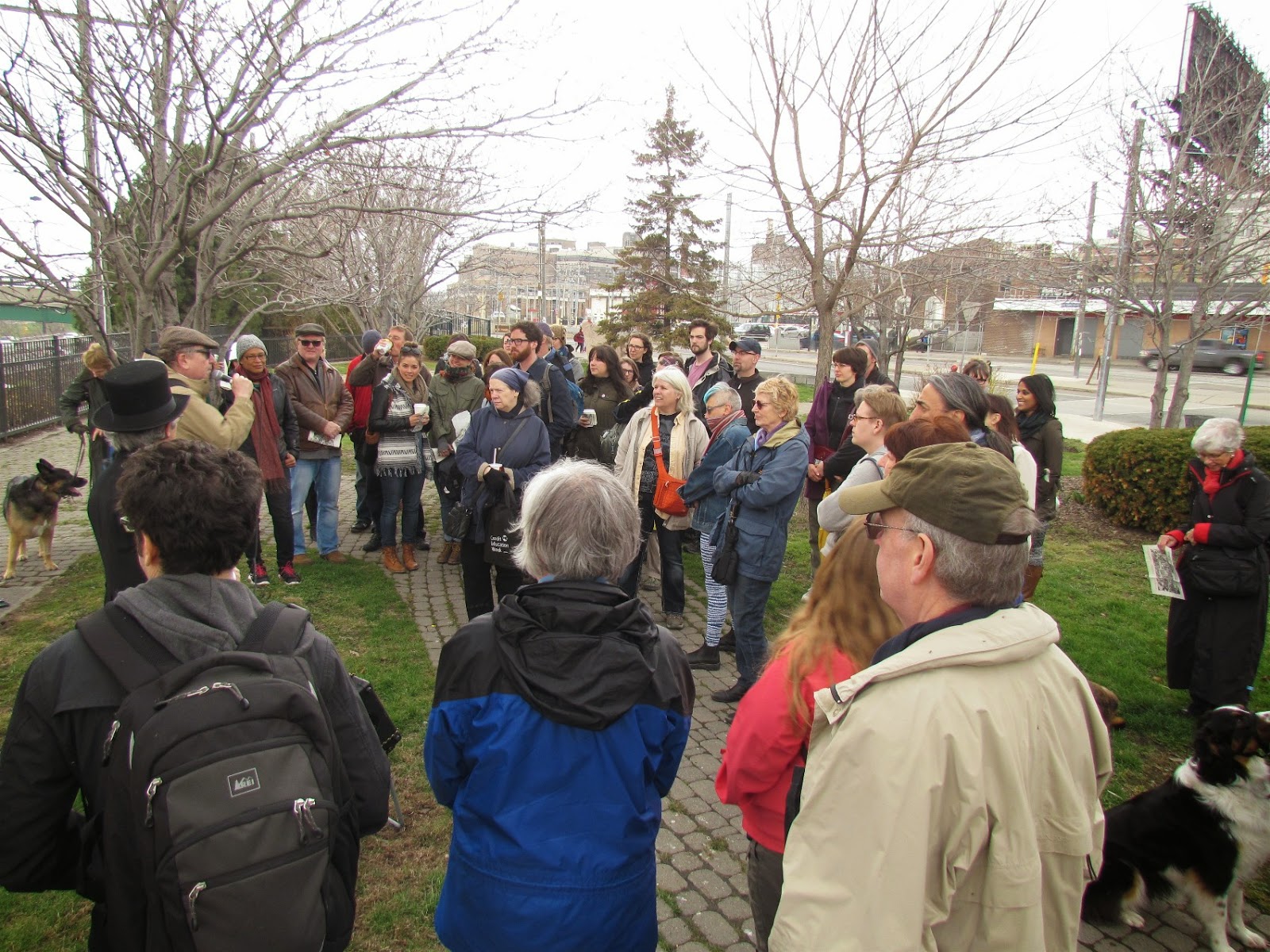 The walk Teena and I did in our neighborhood today was called Visions of Parkdale, Past and Future, in the Balance.

Alec Keefer will lead us through what remains of the first lakeside Estates near King street, then show us remnants of the Mansions on Jameson. Where are they? We will see the Middle class homes and Institutions on Dunn and other streets. We will see the various pockets of blue collar housing. Why are they in these places? Alec will trace the changes in Spencer and Tyndall, leading us into Liberty Village, at the border of Parkdale.

Jack Gibney will describe a vision of a beautiful Historic village with increased housing, commercial and parking space and plans to preserve some beautiful buildings and make Parkdale the Paris of Toronto.

Alex Keefer, to the left below, has lived in Parkdale for 30 years and has written many books mostly on the architectural growth of Toronto. Jack Gibney, in the middle, helped to organize the Parkdale Village Historical Society. Mona, the society's secretary, is in costume on the left. 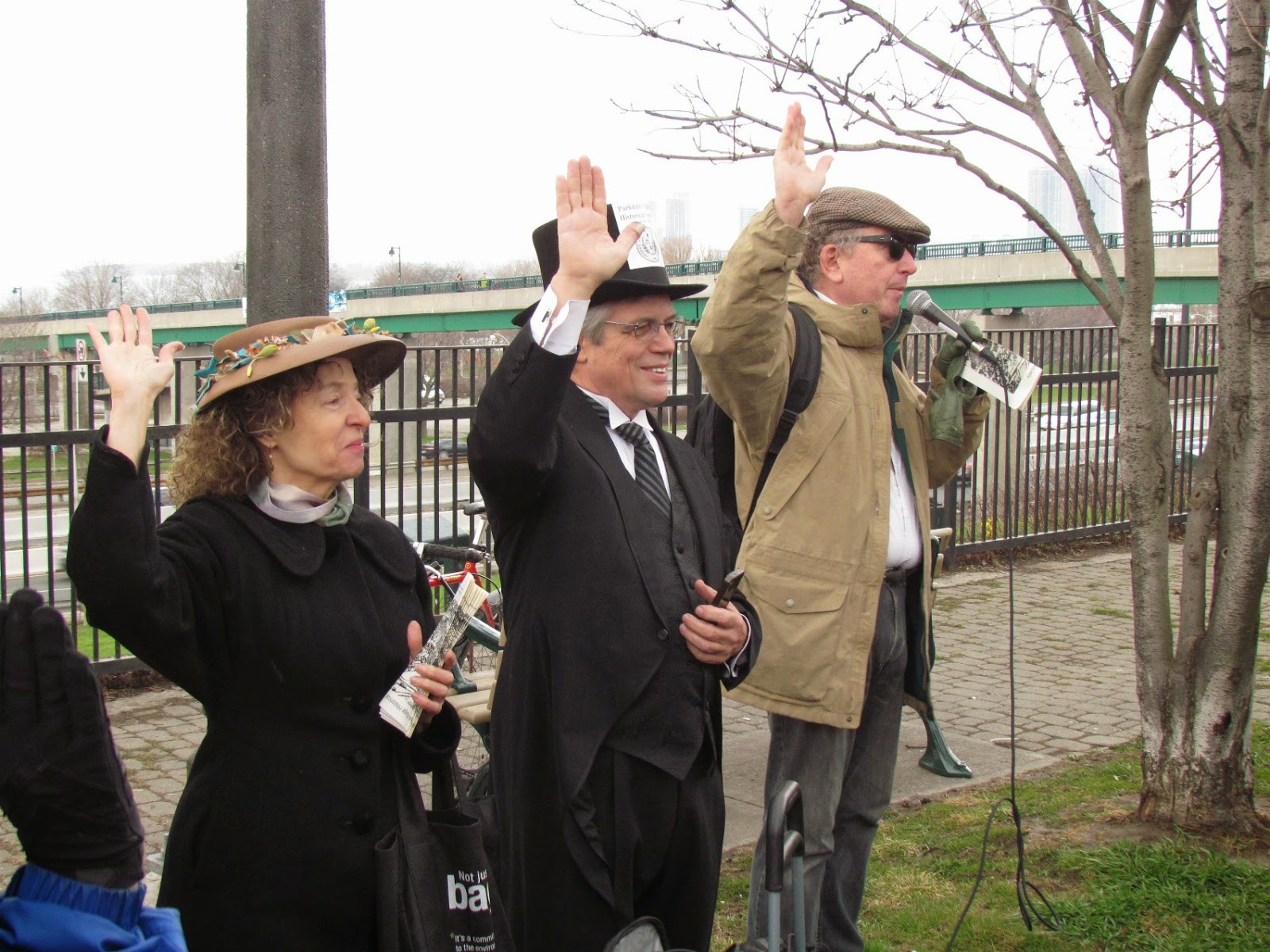 Alec was a fountain of knowledge of the neighborhood and it was hard to remember or note it all. Here are some pictures and things I do remember.

Tiller Ave is an example of street design that Jane Jacobs would approve of. Beautiful residential homes on one side of the street and multi-family buildings on the other. The dark brown house on the right is 112 years old! 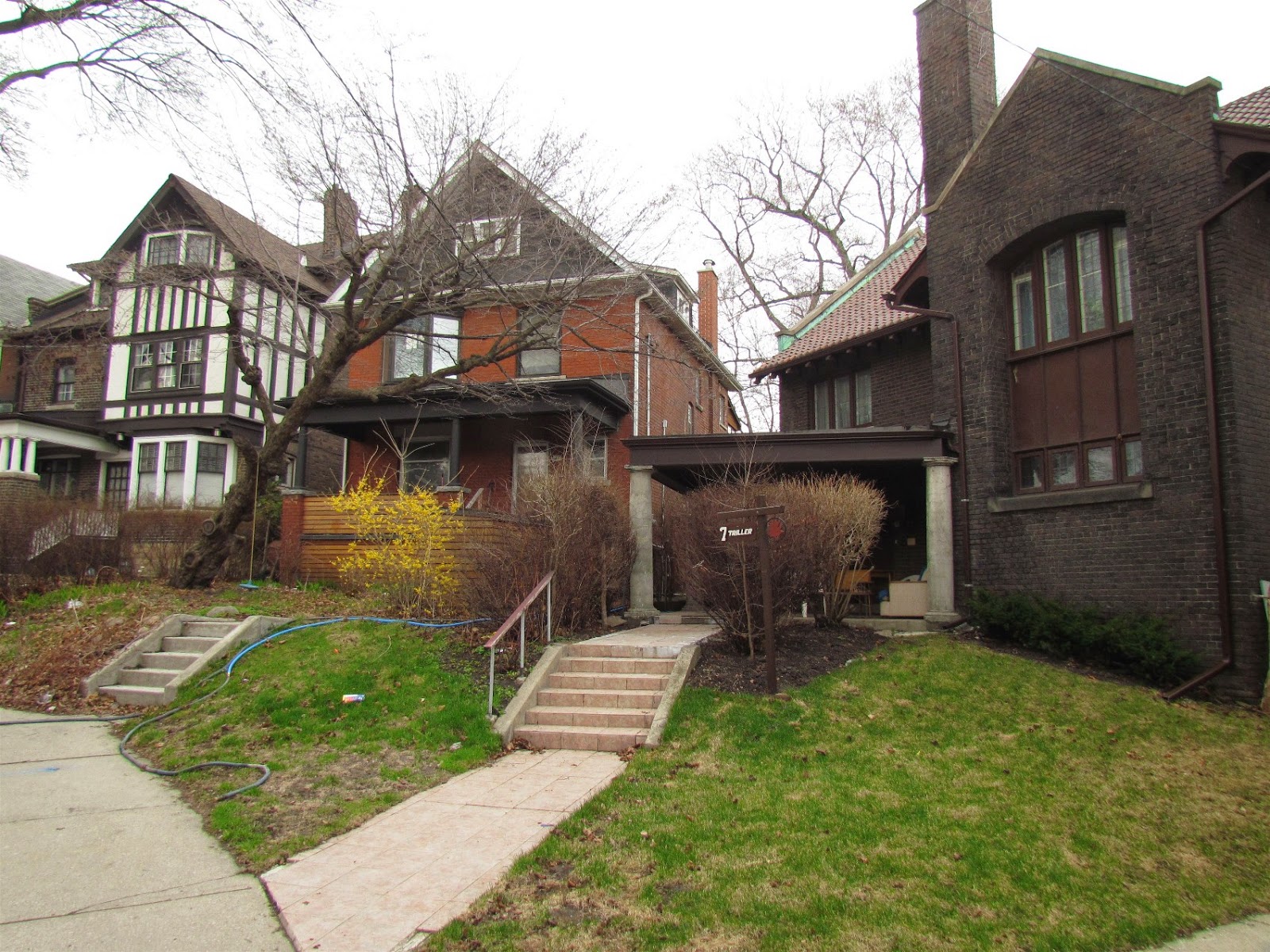 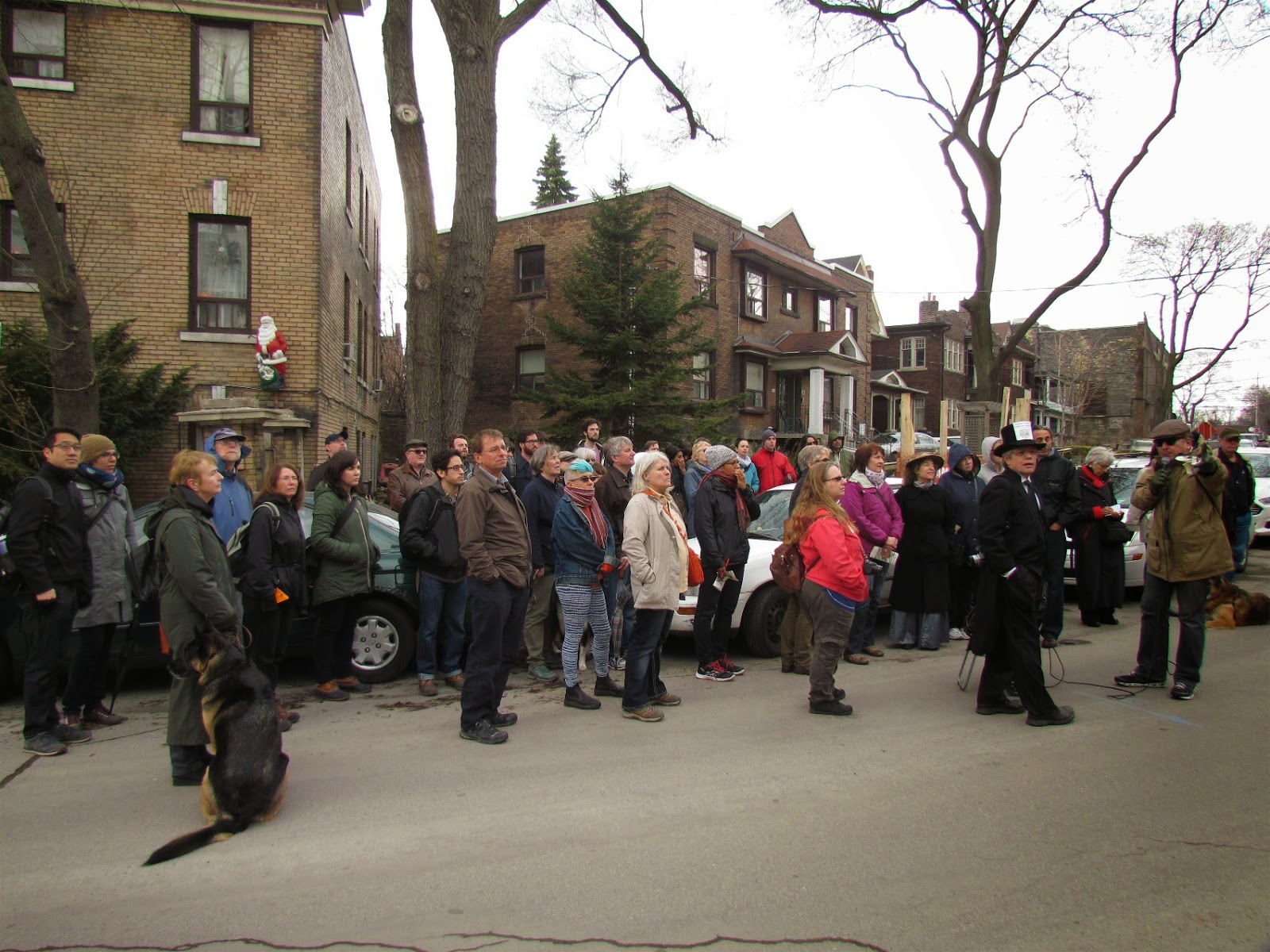 On Wilson Park Road sits this yellow house down the end of this laneway. It once was an estate house that sat on its own. The front of the house faces the lane. When it was built, these two other houses didn't exist and the laneway was in fact a long driveway from the house to King. Now the back of the house, which sits at an odd angle between two streets, has an address on Beatty, the street behind. 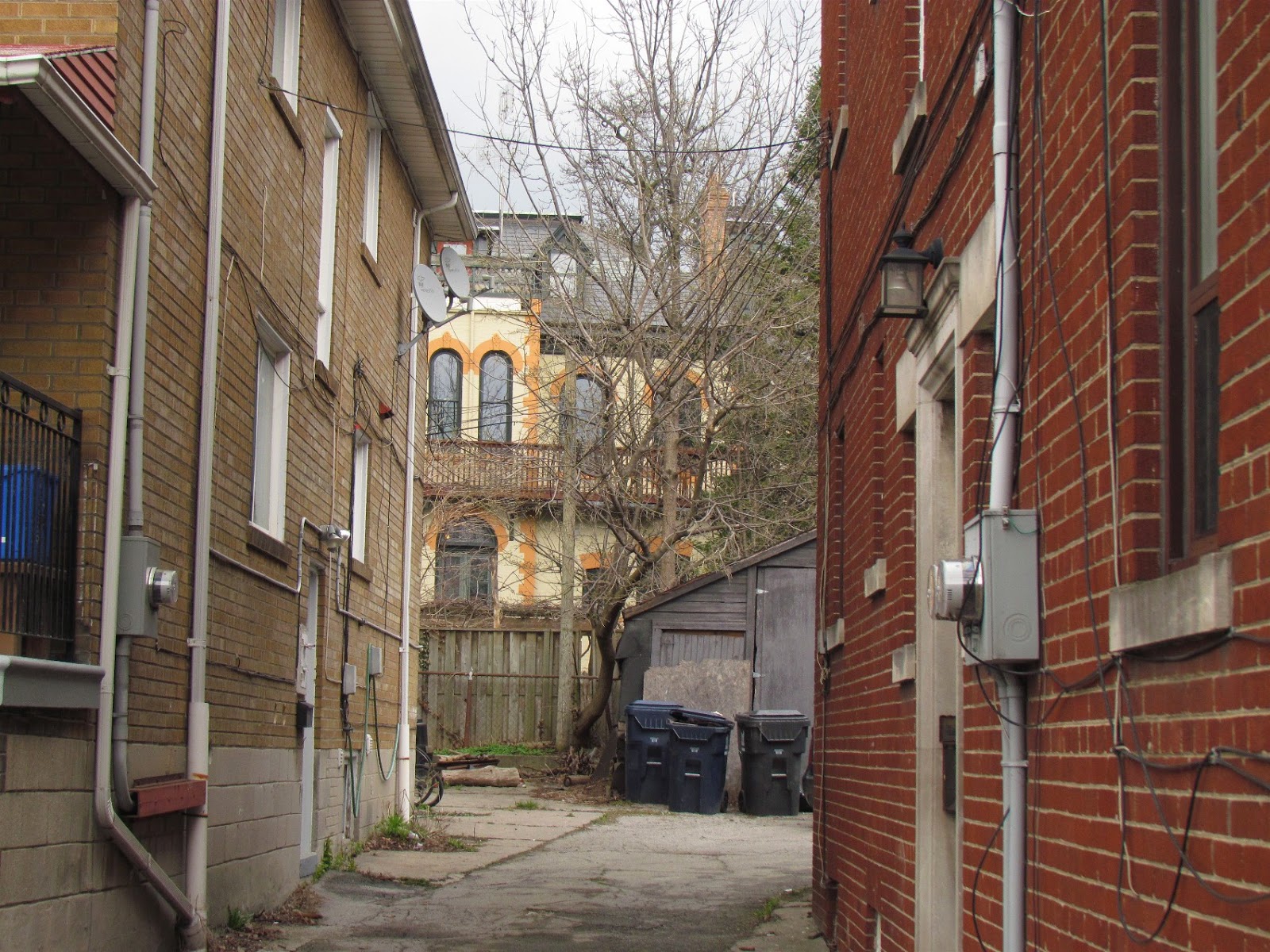 I loved this house at the corner of Wilson Park Road and King. It's built in a series of octagons. 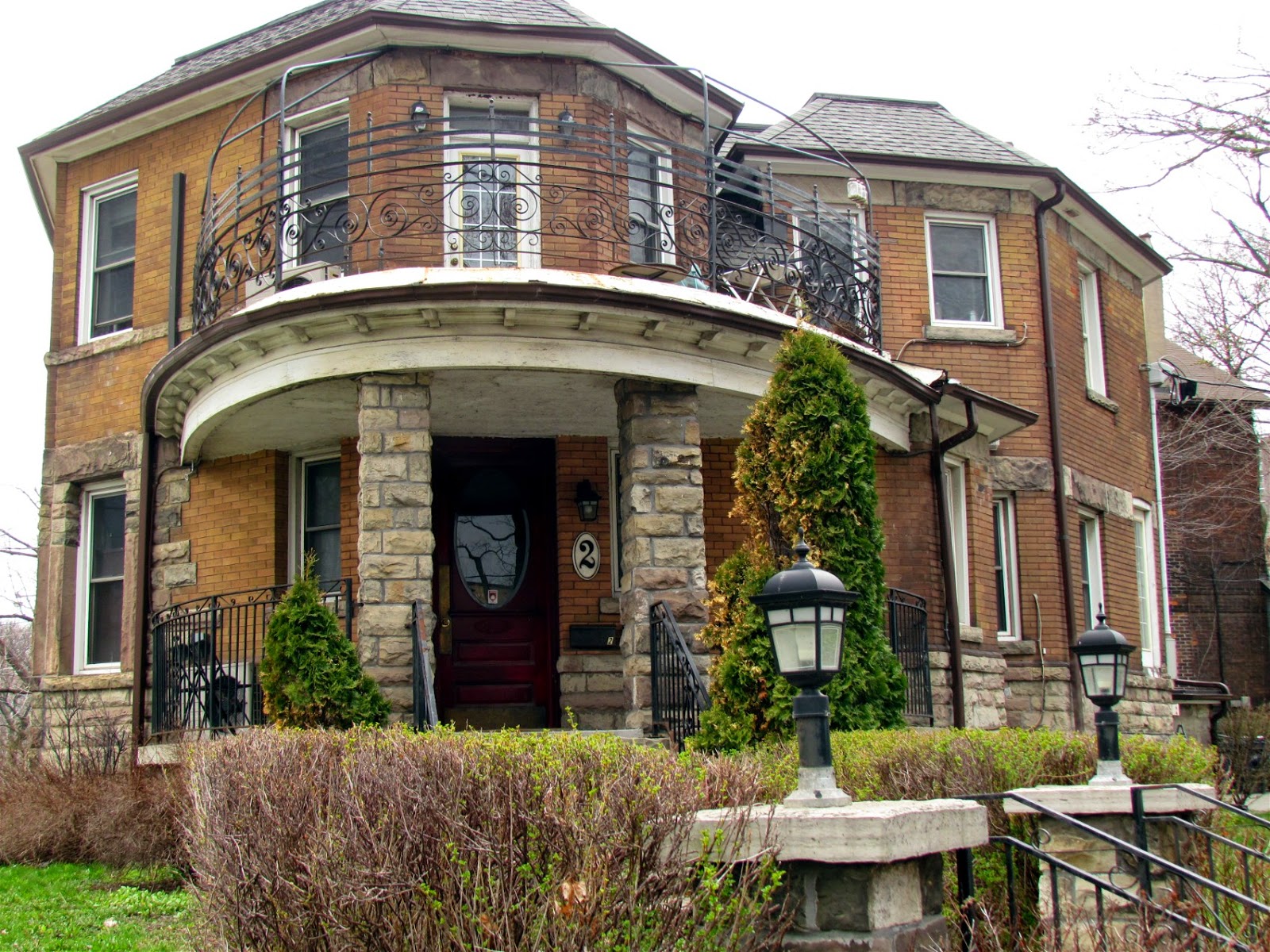 This house on Dowling was built in 1870. There is a story about the original owners, that I didn't get notes on. Much research to do later. 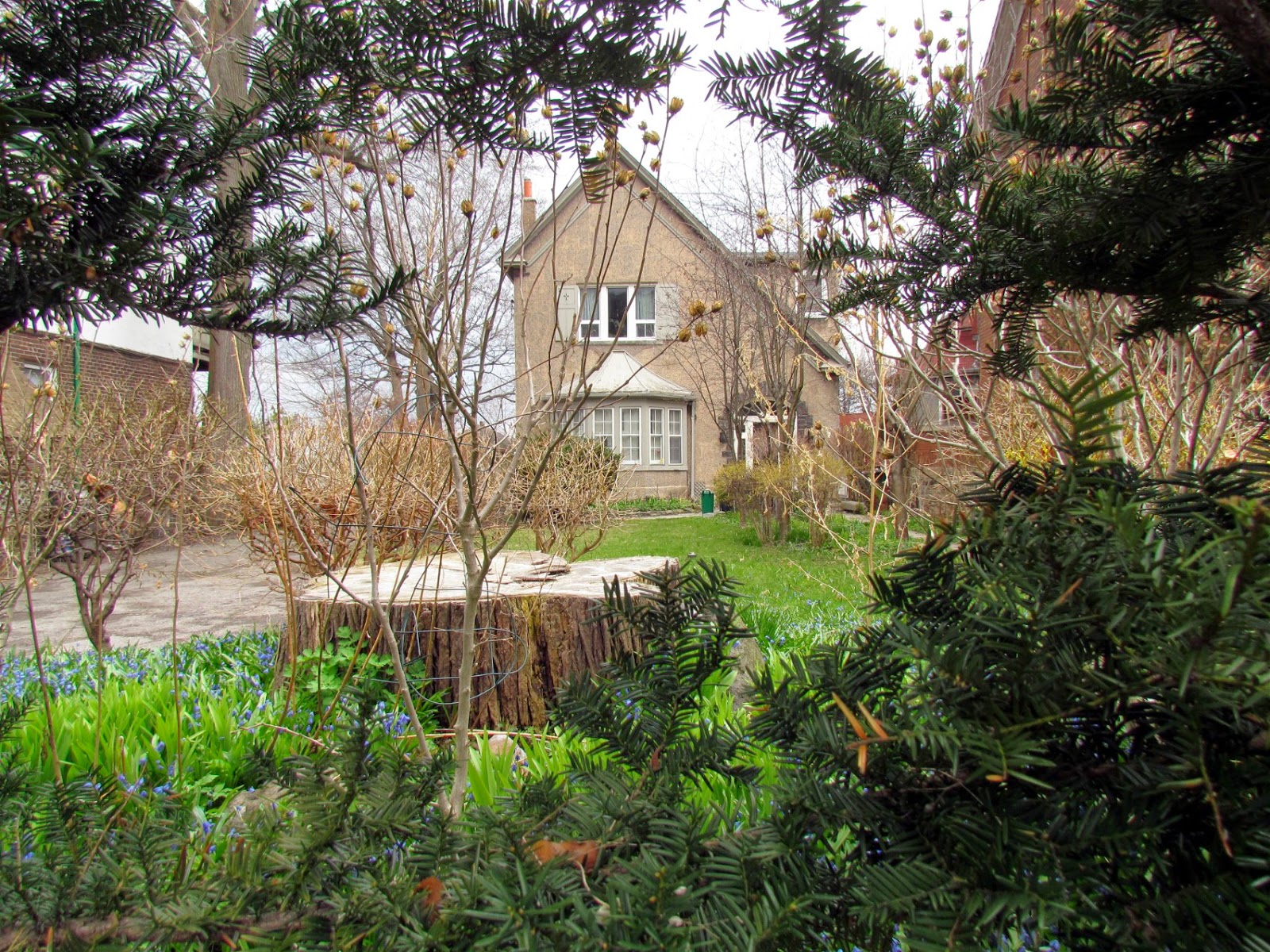 I loved this house and the design beneath its windows. There used to be a veranda on the south side of the house where semi-circle window is. Families used to sleep on their verandas on hot summer nights to take advantage of the cool breezes that would come up off the lake. 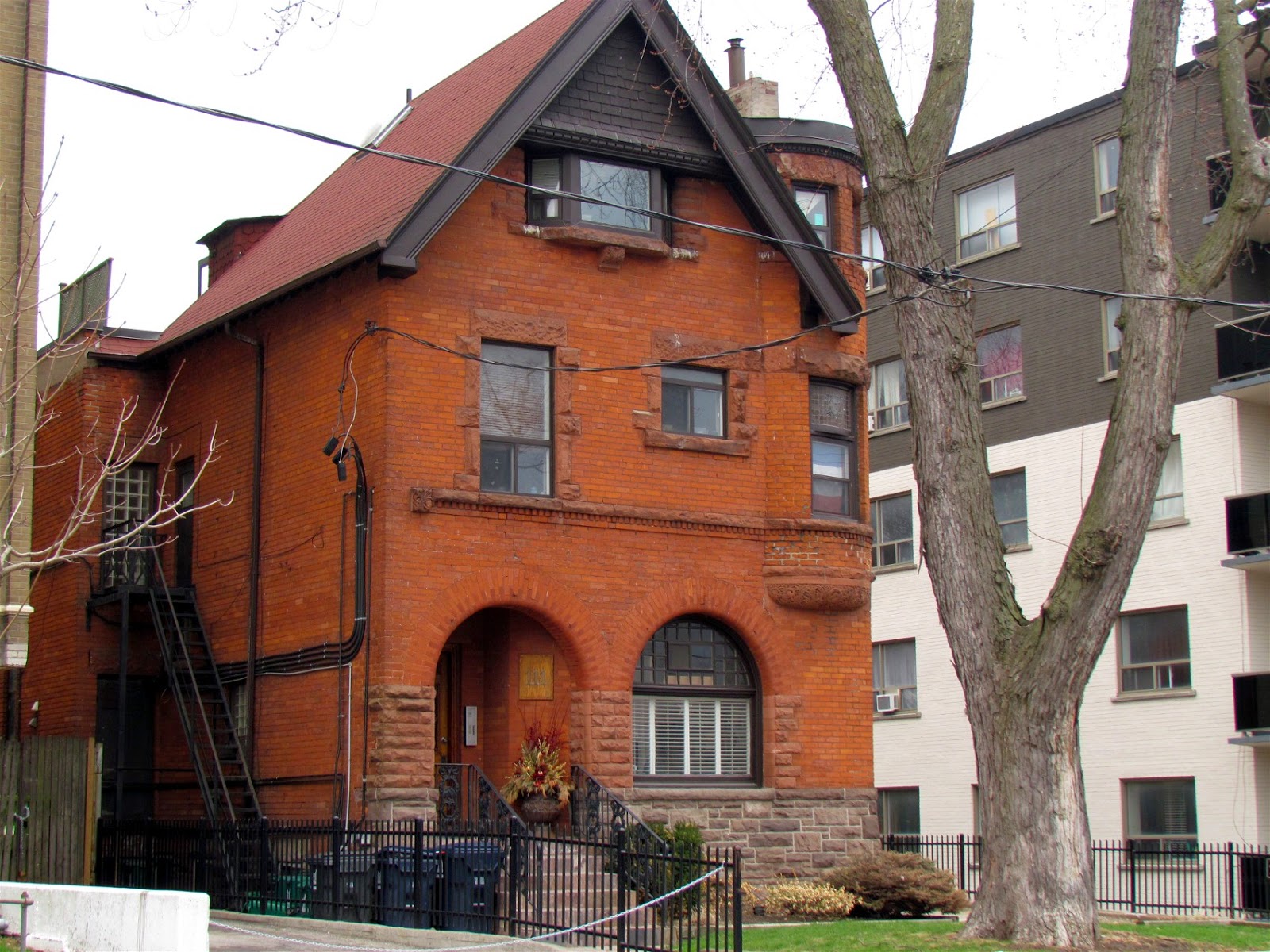 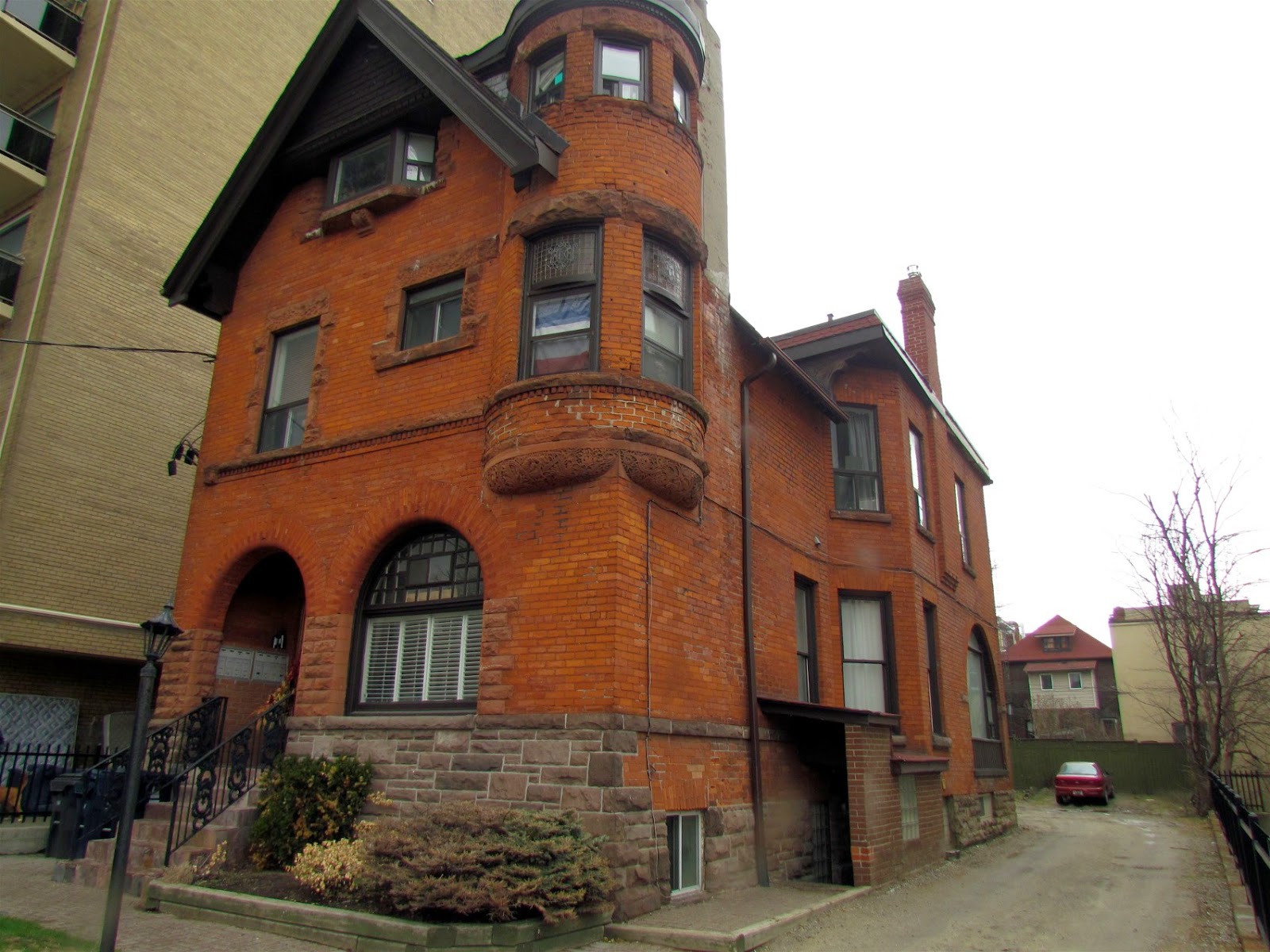 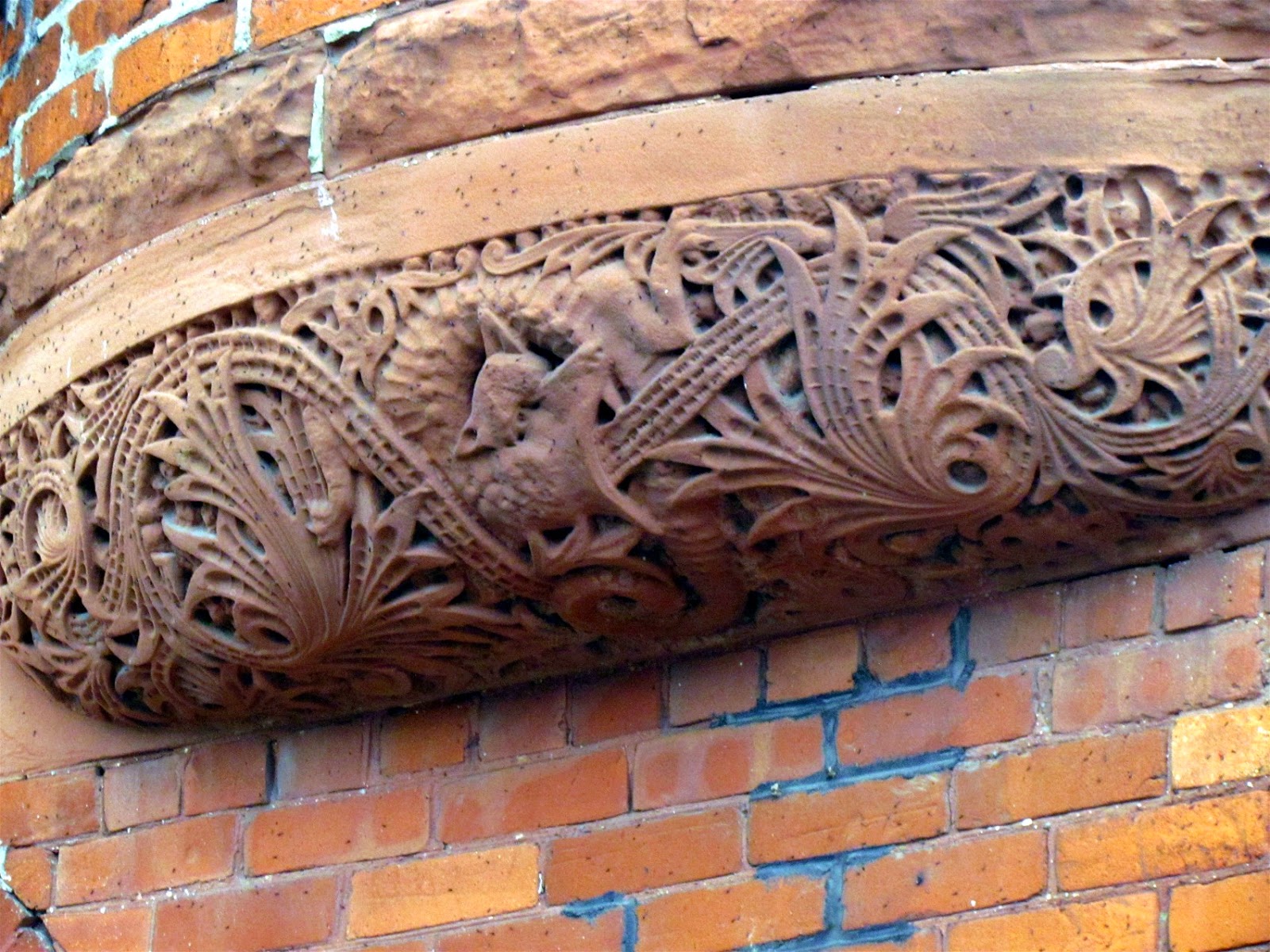 At the corner of Dowling and King is the original home of Canada's first black doctor, Dr. Anderson Ruffin Abbott. 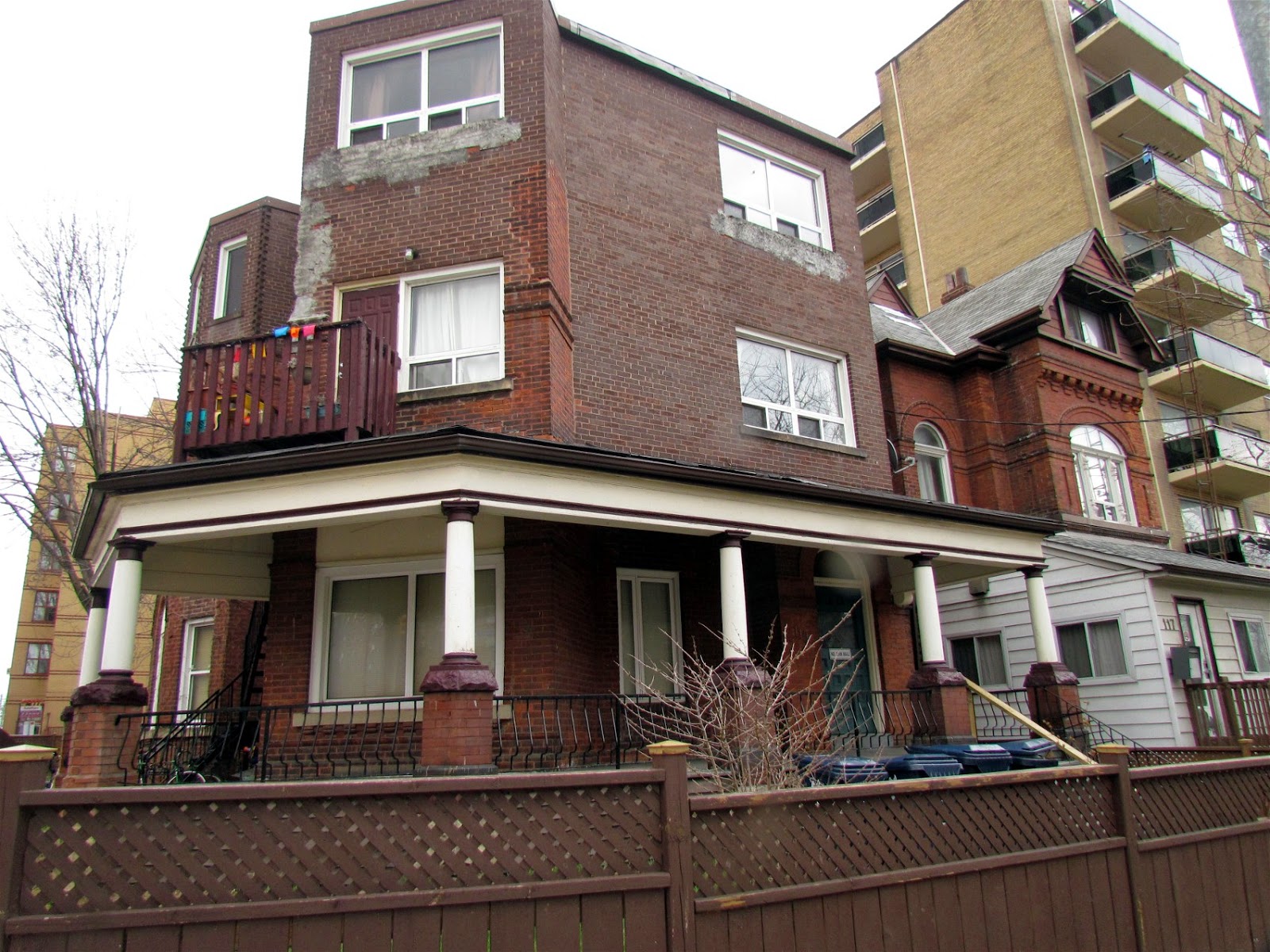 On the north-east corner across from it is the home of Canada's Postmaster when Laurier was Prime Minister. I love the dome. 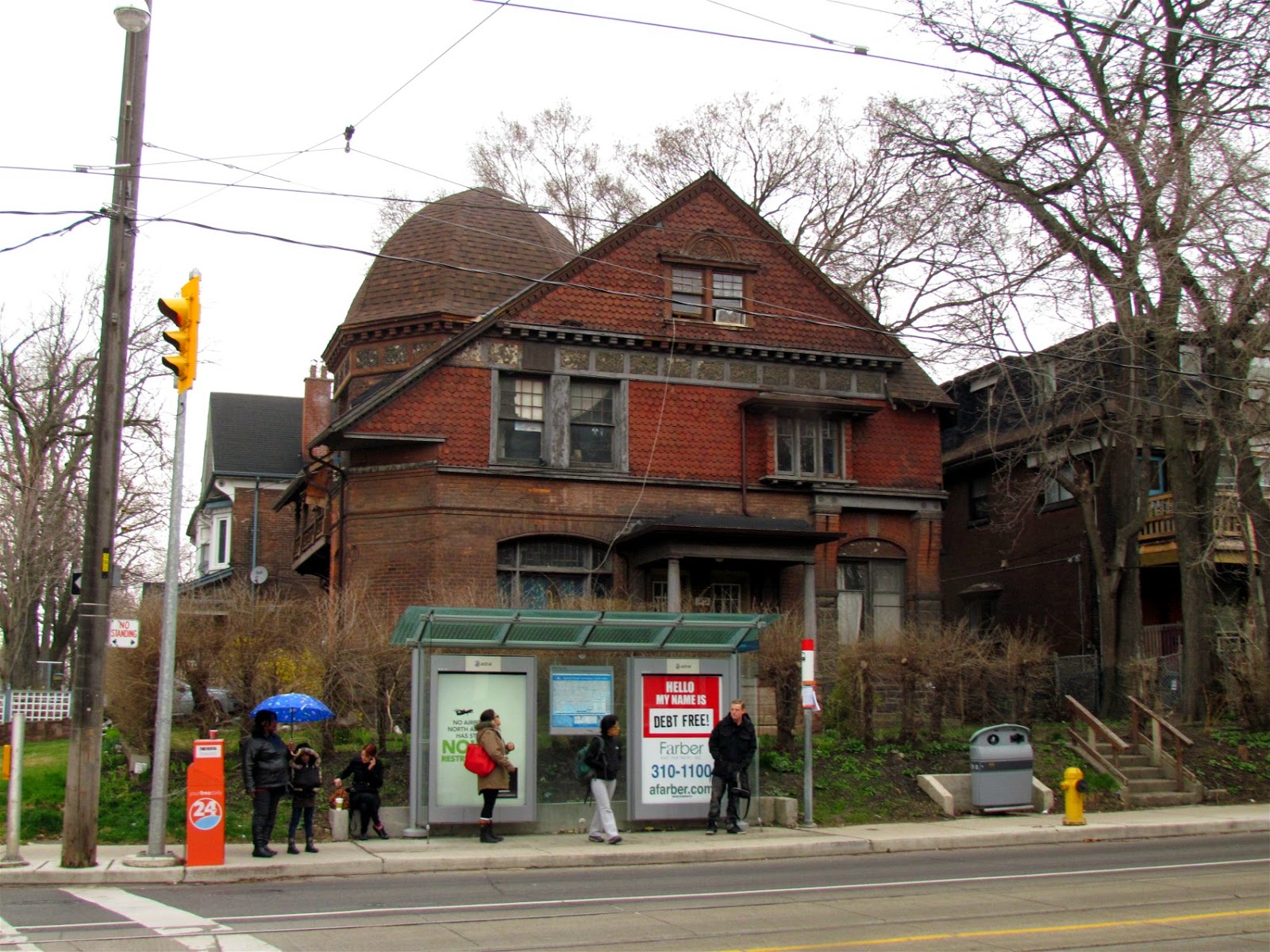 These two places sit a street apart. They are sister homes. Jack and Mona fully renovated the home at the bottom to its former beauty. 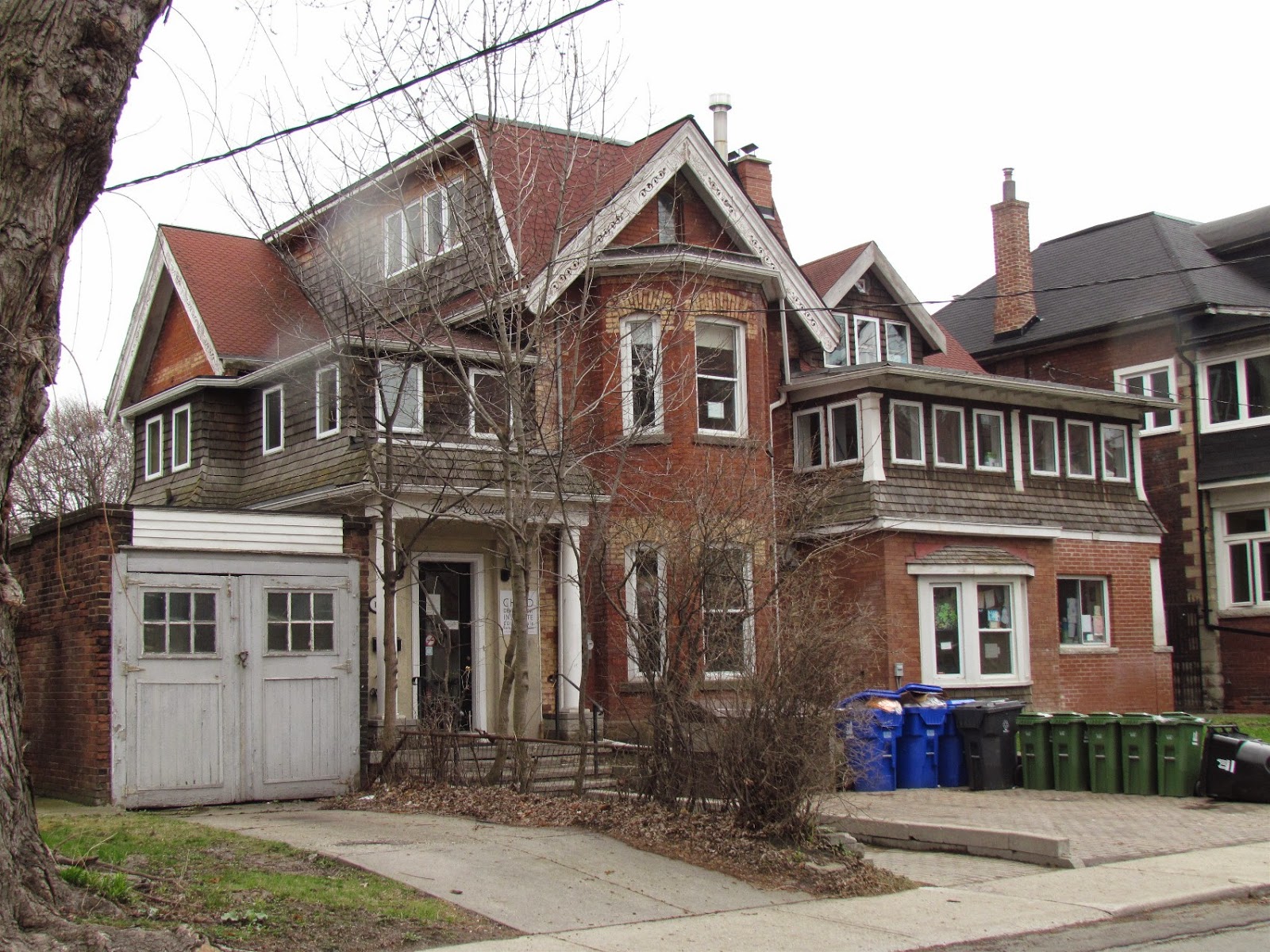 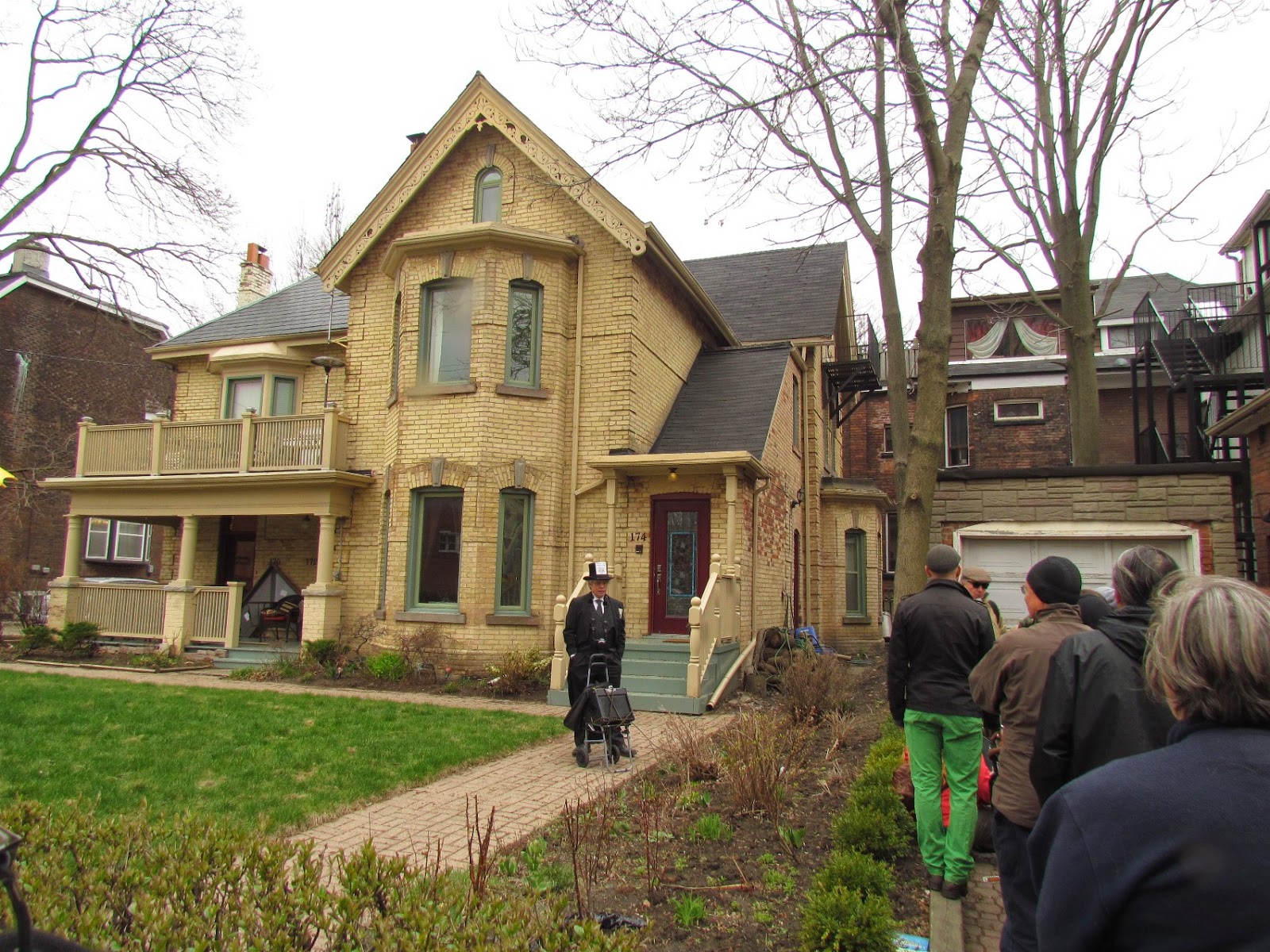 This building was one of the first apartments built with full electricity. 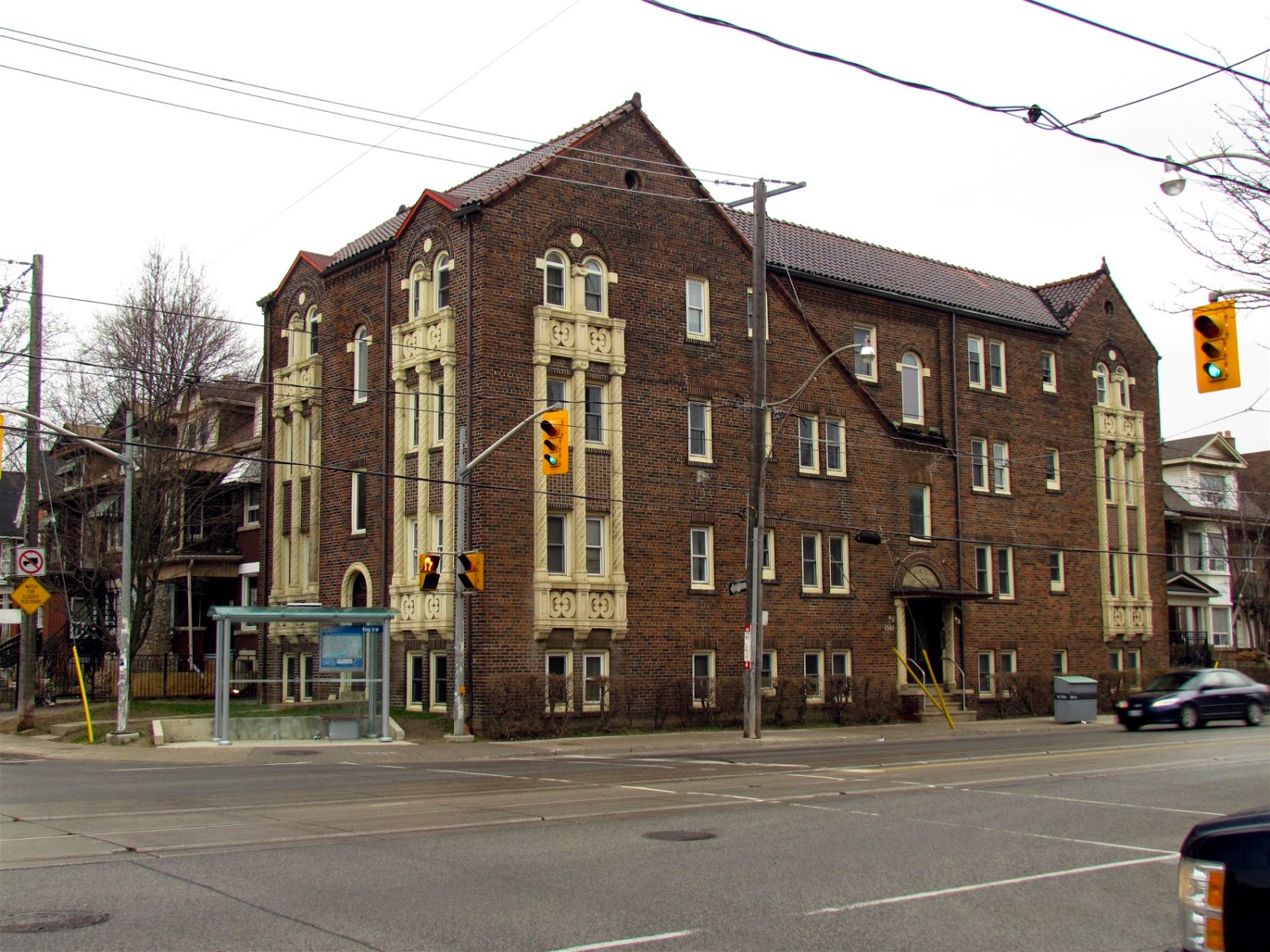 I borrowed this picture from Teena. This is a picture of Cowan Ave. The houses on the right have very small backyards while the ones on the left have none. We didn't go down the street and apparently the ROM does a one hour walk just for this one street. We'll have to go back sometime. 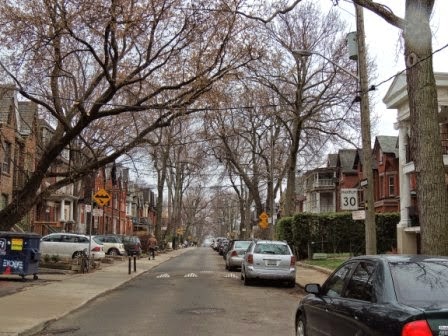 This old apartment at the corner of Spencer and King was built around the early 1900s. Something tells me that I may have visited an aunt who lived here way back in the sixties. 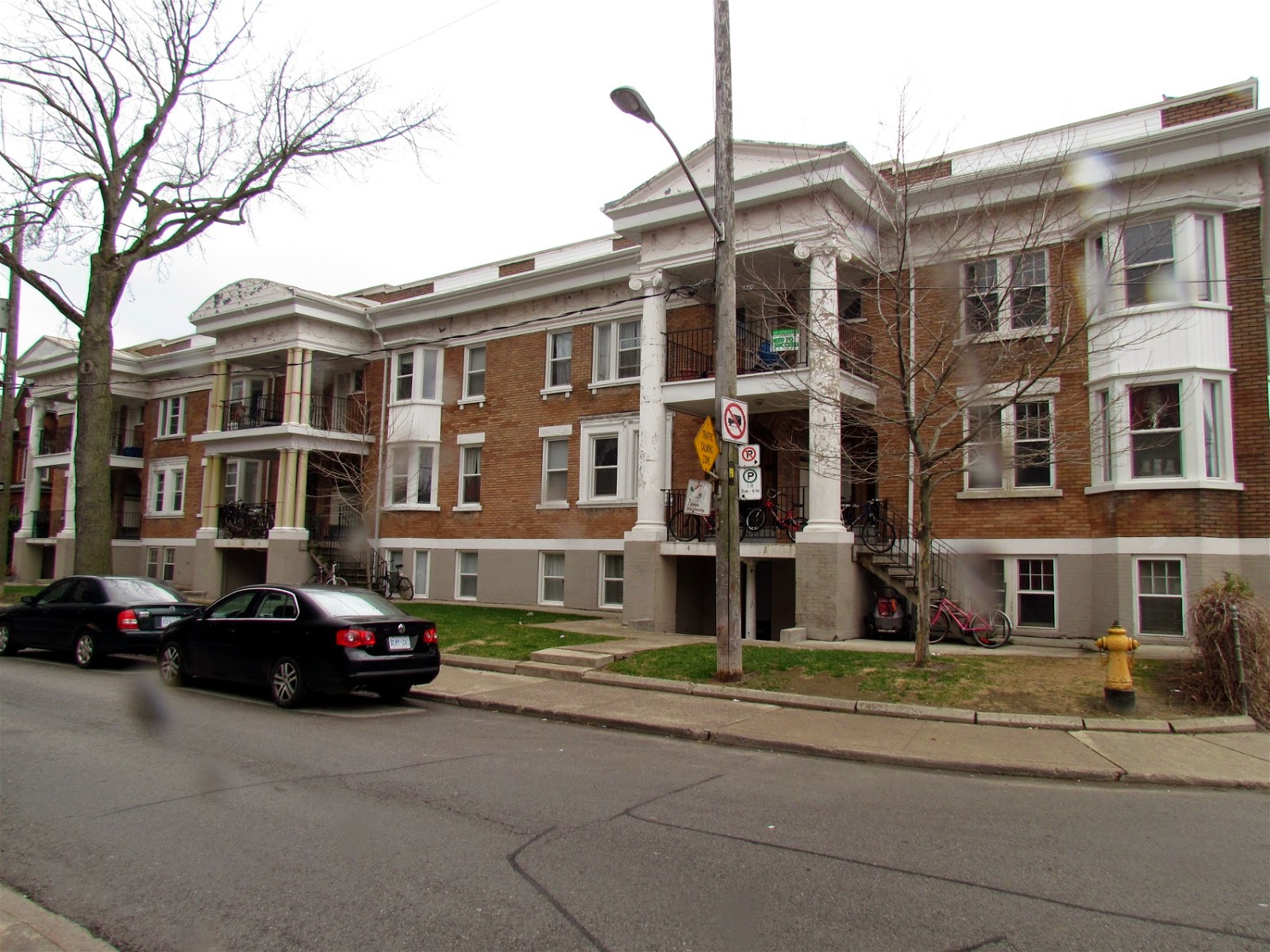 We then traveled into the Liberty Village area where all the old factories have been turned to other uses. It was raining and my pictures all have watermarks. I love the area and this summer plan to got there on a bright sunny days for photos and research.

I do want to finish with pictures of one building which sits on Atlantic. It is a formidable looking place that I always wondered about. At one time it was home to the records of the Bank of Commerce. The records were held here for seven years before being sent off for more permanent storage. Now it houses items from the Eaton collection. It would be so much fun to get a tour of it!

It was the loading dock and steel doors that always intrigued me. 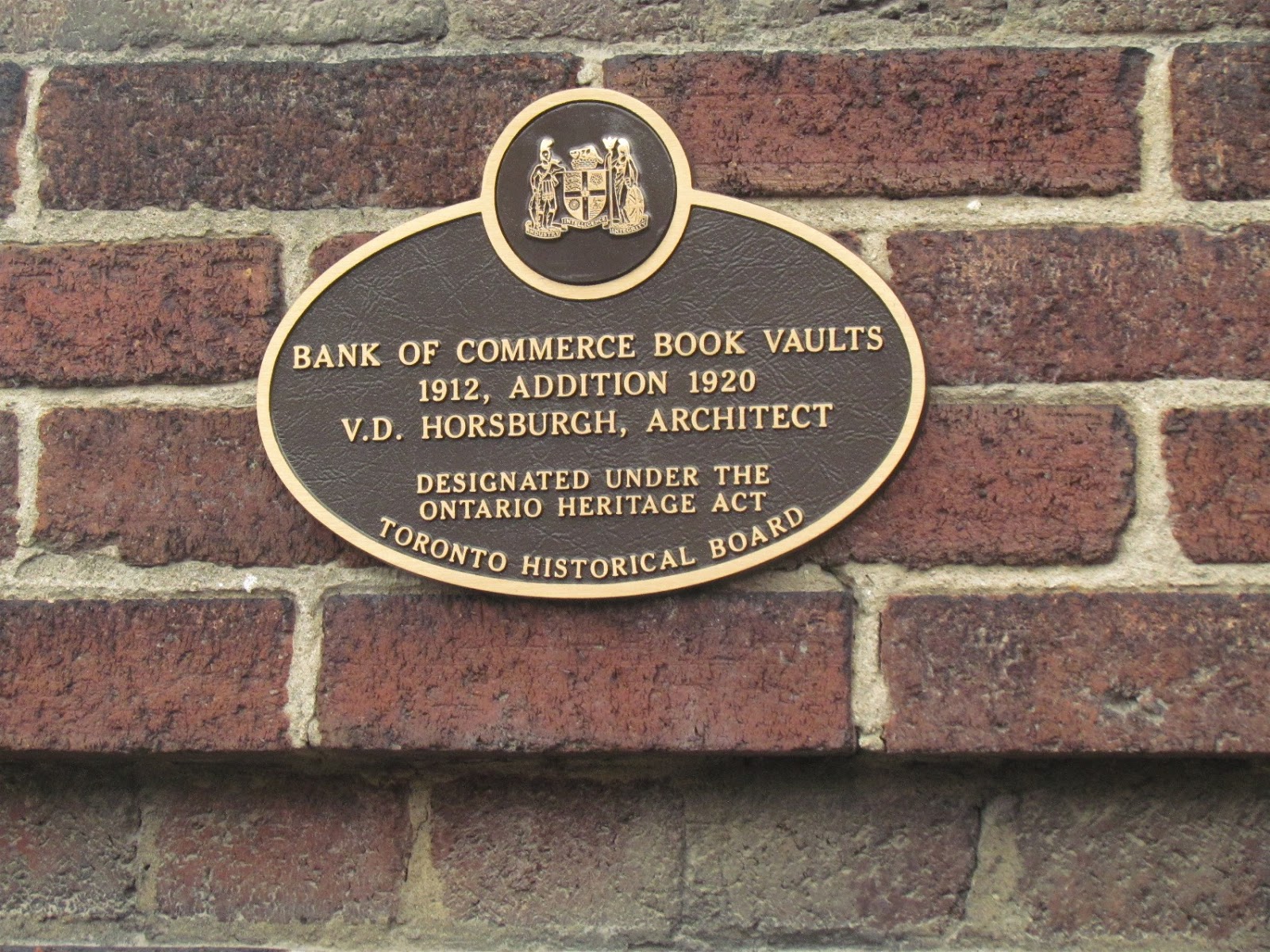 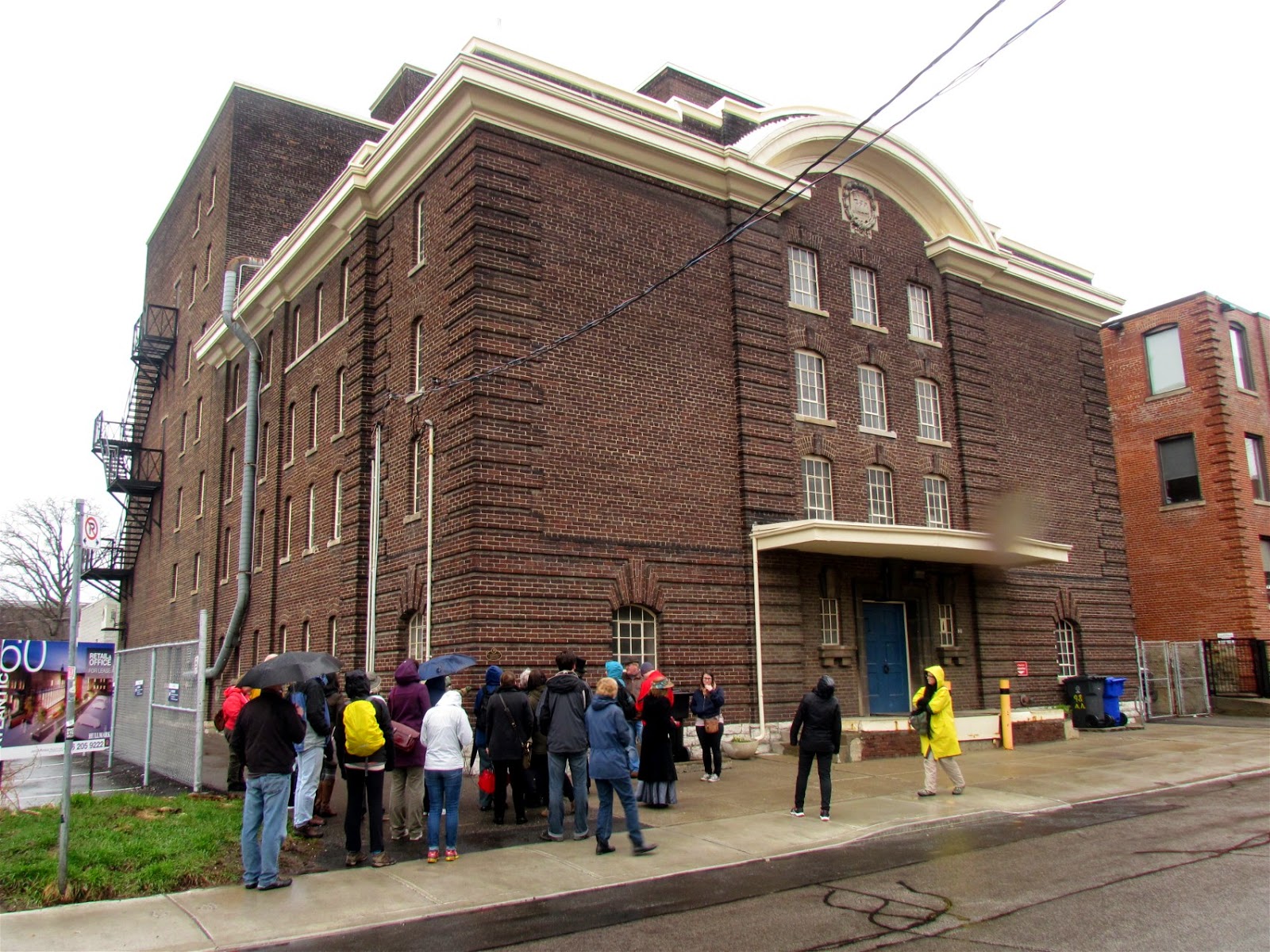 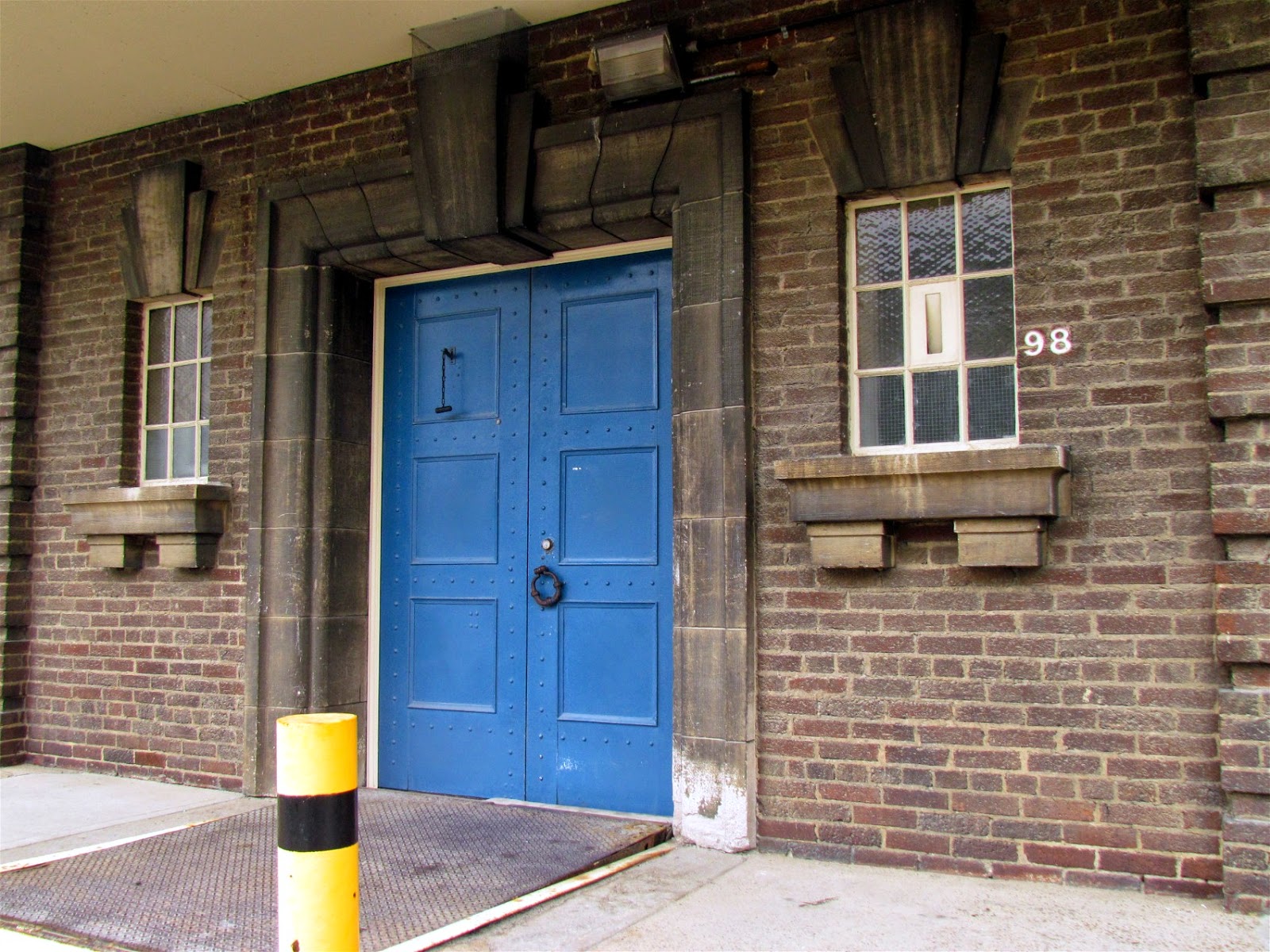 It was a cold, wet, fun afternoon. Alec told many interesting and humorous stories. He knows the area, probably better than anyone and is very passionate about how it should be developed in the future.

Thanks to Alec, Jack and Mona for a great afternoon!