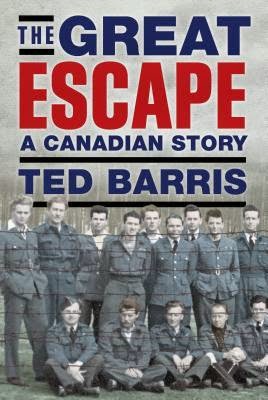 The story of the great escape in World War Two , where prisoners in a large, seemingly inescapable POW camp, staged a large mass escape, is a fascinating one. I have seen the movie The Great Escape many times and a few years ago read an excellent book by Tim Carroll called The Great Escape from Stalag Luft III.

My dad fought in this war and we watched this movie together a few times. He would always explain that Americans were not involved in the great escape, but in fact in it was all British and Canadian officers.

The Great Escape, A Canadian Story tells the story of the Canadians involvement in the escape and it was quite substantial.

On the night of March 24, 1944, 80 Commonwealth airmen crawled through a 336-foot-long tunnel and slipped into the forest beyond the wire of Stalag Luft III, a German POW compound near Sagan, Poland. The event became known as "The Great Escape," an intricate breakout more than a year in the making, involving as many as 2,000 POWs working with extraordinary co-ordination, intelligence, and daring. Yet within a few days, all but three of the escapees were recaptured. Subsequently, fifty were murdered, cremated, and buried in a remote corner of the prison camp.

But most don t know the real story behind The Great Escape. Now, on the eve of its 70th anniversary, Ted Barris writes of the key players in the escape attempt, those who got away, those who didn't, and their families at home.Barris marshals groundbreaking research into a compelling firsthand account. For the first time, "The Great Escape: A Canadian Story" retells one of the most astonishing episodes in WWII directly through the eyes of those who experienced it.

The movie fictionalized much of the escape but the conditions the men were held under, their dealing with the guards and the rigors and  mass planning of the tunnel are seemingly accurate.

In 1963 the studio had to hire big America and British stars to make the film a success. They also had to show Americans being a huge part of the escape to make the film sell-able.  Steve McQueens character and motorcycle chase were fiction as were some others but here are some interesting Canadian facts.

James Garners role as the scrounger was in real life Barry Davidson from Calgary. They main diggers weren't American and British as played by Charles Bronson and John Leyton, but the tunnel king was Wally Floody from Chatham, John Weir from Toronto and Hank Birkland from Spearhill Manitoba. Donald Pleasance role as the forger was actually Tony Pengelly from Weston Ontario.

The list goes on. It seems as if the great escape may not have happened if not for Canadians.

The author only takes a moment to explain this and the rest of the story is about the lives of the Canadian men in the camp and the entire story of the escape. Short backgrounds on how each arrived at the camp is given and their lives after the war is told too. Many never got over it.

76 men escaped, that March night, nine of them were Canadians. 50 were murdered by the Gestapo after being captured, and six of those were Canadians. Their stories are fully told here. More on the stories of the nine Canadian escapees are on the Canada at War website. The next time I watch the movie, I will have a greater appreciation for Canada's role. One note, three escapees were successful in getting all the way back to England. A home run!

This is an interesting fascinating book that I highly recommend. Although I give it a 9/10, I can't for the life of me find a reason that I'm not giving it a full 10.
Posted by Swordsman at 20:09