Beer of the Week - Gosser Beer 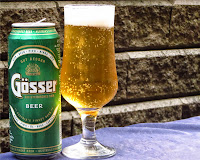 Admittedly I am a hop head. I love IPA's, APA's and love to start an evening with a light hoppy beer, and make my last one super hoppy!

For some reason though, I seem to be prefer lagers lately, especially European lagers.They are not in your face with that bitter hop bite but finish with a very nice light bitterness that we seem to be unable to match in most cases on this side of the ocean.

This week I found an Austrian lager, Gosser Beer at my local LCBO. Gosser Beer is brewed by Goss brewery which is now part of the Heineken Group. The brewery though really originated back in 1782 by Max Kober, although it wasn't called Gosser at that time. By 1892 it was the third biggest brewery in Austria.

Gosser brewery managed to survive despite being occupied by four different countries in the first half of the nineteen hundreds.Finally in 1955 Austria became an independent country again and Gosser Beer was the beer that was served at the Unification Treaty ceremonies.

The beer pours light yellow in colour, and is quite clear . It has a nice white head which leaves behind nice lacings when I sip.

It is very flavourful on my first sip, with a hint of sweetness to start,  then a slightly bitter finish which quickly falls off. Just a touch of bitterness remains on the tongue. It's a little sweet for my liking with not enough bitterness in the finish. Many may like this one, but for me I would not buy this one again.

Maybe my hop head tastes are starting to return!