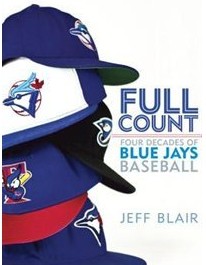 The Toronto Blue Jays are a baseball franchise that has been around since 1977. That's 36 seasons and two World Series Championships!

Until now, the only book that I have read about the Jays was a 1993 book by Tom Cheek, who at the time had broadcasted every game the Jays had played (he passed away in  2005 and I still miss his voice on the radio during Blue Jays games. He now is now in Cooperstown). The book was Road to Glory about the Jays from inception up to that point.

I just finished Full Count: Four Decades Of Blue Jays Baseball, which although the title suggests is the full story of all 36 seasons, is in fact the story from the Jays winning seasons in the late1980s 'til just before spring training for this 2013 season ... and there is nothing wrong with that.

From one of Canada's top baseball writers and radio hosts: a retrospective of the Toronto Blue Jays on the 20th anniversary of Joe Carter's World Series-winning home run--and a look ahead to what promises to be their most successful season since. A must-have for all Blue Jays fans, and a great read for Toronto and Canadian sports fans in general.

In Full Count, Jeff Blair takes us back to the days when the Toronto Blue Jays were "the Cadillac of franchises," and shows us exactly what they did right to become baseball's premier club. Then he explores the disappointing aftermath, when the league's fourth-largest market became an also-ran: seemingly destined to languish behind the big-spending Yankees and Red Sox and free-wheeling Rays--until the offseason of 2012. Full Count will appeal not only to casual fans wanting re-live Blue Jays history, but also to the serious baseball fan who wants to know the real details and business decisions that drove the team to the pinnacle, then to mediocrity, and now (hopefully) back to the top once again.

This is Jeff Blair's first book. Although he wanders a little off topic when speaking on a subject and will go off on the odd tangent, I found this to be a very interesting and easy to read book. He has great insight into the goings on behind the scenes of the Blue Jays and is very knowledgeable about baseball in general.

Blair explains well the challenges of running a major league team in Canada, the only non American franchise, as it pertains to a players interest in playing here, foreign exchange on the U.S. dollar, and even work visas for non-American professional athletes.

I found this a very interesting book and if you have not yet read a book on the Blue Jays and want to read about their history, start with Road to Glory and finish with this. Full Count is also an excellent book to read on its own.
Posted by Swordsman at 17:18