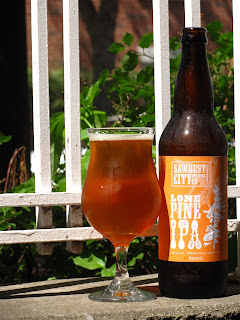 This is my 208th Beer of the Week which is four years worth of posts. For this post I knew I had to do my favorite style of beer, the IPA. Luckily another new brewery opened in the past year, Sawdust City and I have a bottle of their Lone Pine IPA to try.

The two founding member of the brewery, Sam Corbeil and Rob Engman worked for the same beer magazine, Taps, but had never met until the very first Sessions Beer Festival at Sunnyside Pavilion in Toronto. They formed a friendship and that friendship formed Sawdust City Brewing.

Currently they brew out of Black Oak Brewing in Etobicoke, but are building a brewery in Gravenhurst on the Muskoka Wharf which should be open sometime this summer.

There are two different flavours and aromas that hops have. They either are piny or citrusy. (I enjoy both) So when I see the name, Lone Pine, it suggests that this beer will have a pine tasting bitterness.

They list on the can the types of hops that are used in the brew, Simcoe, Chinook, Columbus and Summit.

I checked the Freshhops website to see what aromas and flavours these hops impart.

Simcoe adds an intense pine aroma but is considered a bittering hop.

Chinook is used for bittering and aroma and is described as a pine forest washed with exotic spice and infused with grapefruit. 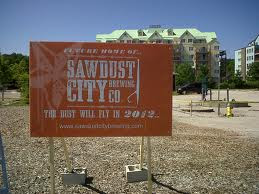 Columbus is rated high on the bittering scale that is both sharp and herbal.

Summit was developed in 2003 and is citrusy hop with great bittering value and citrus notes of orange, tangerine and grapefruit.

The beer pours a dark amber or maybe light coppery colour with a smallish white head. There are hops to the nose, not the citrusy aroma, but more leaning to floral, perhaps pine. Maybe it's the name of the beer that makes me lean this way.

On my first sip, I notice the pine hops there right away. The bitterness only increases in intensity and finishes with a pine needle bitterness. This is not the name that makes me think that, but the pine is really there.

And that's not a bad thing!

I have been drinking many Pale Ales and IPA's with citrusy hops and it has been a while since I tried one knowing it would have more of a pine taste. Shows how many great styles of IPA's there are out there and this is one of them.

It is not a beer I would normally start and evening with, as it's not a session ale but a closer. To start with this would kill the taste of all other beers that followed.

A well crafted IPA and a great beer to celebrate my four year anniversary of the Beer of the Week!