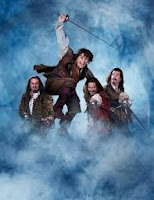 This afternoon Teena and I saw The Three Musketeers at the Festival Theater in Stratford. It was the first time we have been to the opening  day of a play. Usually we go before opening day, when it is in preview, during the season and once even on closing night (The Producers).

I had read the book, which I found good, but a little confusing, and was looking forward to seeing it on stage.

Vowing eternal comradeship – “All for one, one for all!” – the cadet D’Artagnan and his new friends Athos, Porthos and Aramis, members of the King’s Musketeers, risk their lives to protect Louis XIII from the machinations of the villainous Cardinal Richelieu and his accomplice Milady de Winter, a wily adventuress as dangerous as she is beautiful.

Even though it is only 30 seconds long, we enjoy the musicians trumpeting the 10 minute warning before the start of the play. 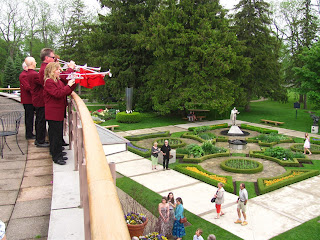 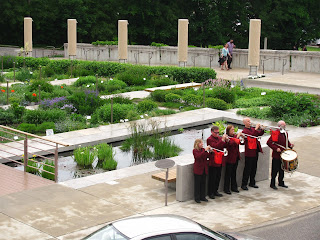 Seeing The Three Musketeers was like seeing two plays. The first act was more focused on comedy than drama, plus there was lots of sword fights and action. Louis XIII was played for laughs and had some hilarious scenes.The tone changed entirely in the second act becoming very serious and dramatic.  Less action and more plot.

There are many characters involved in the play and like when I read the book, I found a little confusing. With the intermission, the play was just a little under three hours but it did not feel that long. The performance was very lively and spirited and one that Teena and I enjoyed very much. This is a play I would certainly recommend! 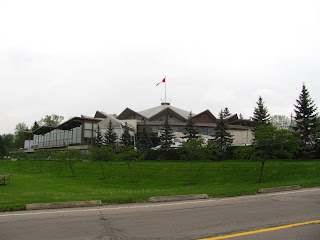