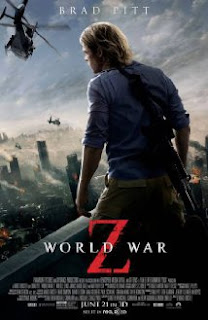 Today for a belated Father's Day, Ken took me to see World War Z and then out for lunch after.

Ken had lent me the book a couple of years ago, which I surprisingly enjoyed. I had wondered when I heard it announced that they were going to make a movie out of it, how on earth they could do that.

The book is done as a study, looking back on the zombie war. How do you make a movie based on a study. Easy, take the premise of the book and ignore all the rest.

World War Z revolves around United Nations employee Gerry Lane (Brad Pitt), who traverses the world in a race against time to stop the Zombie pandemic that is toppling armies and governments and threatening to decimate humanity itself.

This movie is very well done. The commercials look like the movie will be all action but it's not. There are suspenseful scenes, moments where the characters and huge epic scenes with thousands of zombies on the attack. I loved how there were scenes of zombies attacking and biting people, but not too many. Brad Pitt, of course, has some close up moments too, but not too many.

Brad Pitt was excellent as Gerry Lane. His character has been through the wars and is not one to panic, but it was interesting to see Lane becoming somewhat frazzled as the movie goes on. 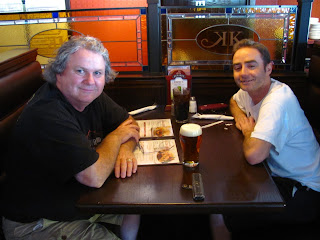 This was my first 3D movie and found it a little gimmicky. One of the issues is that scenes are shot to capitalize of the 3D affect, with debris or bodies falling into the camera, which I found annoying. It would work better if they just told the story but have it told in 3D. Some of the effects were terrifi, but I would prefer seeing movies in what is now called Regular D.

Ken took me to Kelsey's afterwards for lunch, which was very good.

Thanks, Ken, for a terrific belated Father's Day (note he did want to do this last week but I couldn't. There were no decent movies I wanted to see last week anyway).
Posted by Swordsman at 17:00