The Battle of York Tour with Muddy York Walking Tours

Today Teena and I did a walk with Muddy York Walking Tours, which walked the battleground of the American invasion of York which took place 200 years ago next weekend.

We have done walks before with Richard, the owner of this group, before and they all have been great. In the picture above, you can see a lighthouse on the right side. Richard led us on a tour of it last year!

We met at the CNE's Dufferin Gates where Richard gave us an overview of the war and why the Americans decided to invade York (now Toronto). It was a cold and windy on the day of the invasion, the same as today. 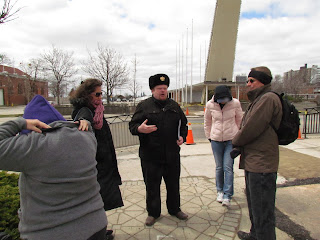 We then walked over to the south side of the Liberty Grand building. It was just west of here where the Americans landed. Just across Lakeshore Blvd. (the road to the left) and about 200 yards up was the first stand the British and Canadian forces made against the invaders and where popular British Captain Neal McNeal fell in battle. 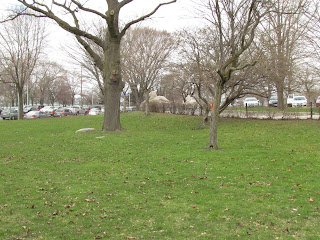 Then it was over to old Fort Rouille, also known as Fort Toronto, which was an old French fort from 1750 to 1759 when it was destroyed and abandoned. It was here in the clearing of the ruins of the fort that another brave stand was made by British and Canadian forces who, unsupported, were finally overwhelmed by the numbers of reinforcements which came in from the landing forces. 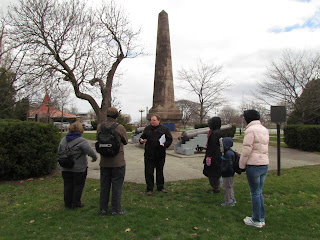 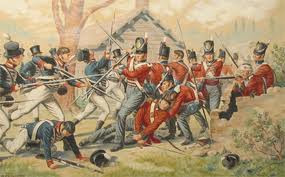 Richard also took the time to tell us the story of Scadding Cabin, built in 1794 which was moved from its original location by the Don River to this current location way back in 1879 in time for the very first Canadian National Exhibition. 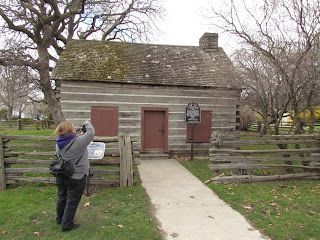 There were cannonS at Fort Rouille and, of course, I had to have a picture taken of me directing fire. 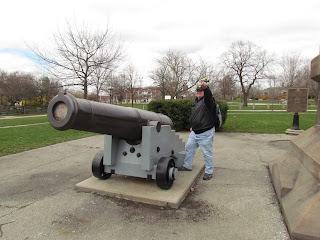 We walked over to the eastern side of BMO field. It was here, where the western battery stood that again a great defense was attempted. Unfortunately, a lit match fell into some gunpowder blowing up the battery and killing around 30 soldiers. Many remains of bones and bodies have been recovered in this area as it was built over. After the explosion, the defenders retreated back to the fort. 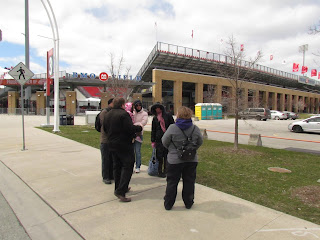 We also stopped along the way at the Shrine Peace Memorial, which faces towards the Niagara river where most of the War of 1812 took place. It was built at the time to celebrate 100 years of peace between Canada and the US. 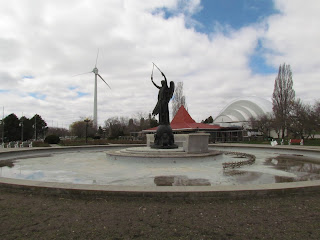 We ended up by the Princes' Gates where Richard finished up the tour by explaining the explosion of the magazine and how it decimated the American troops and killed the General Pike who was in charge of the invasion. 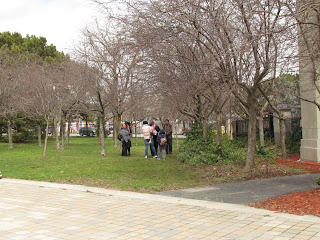 It was a great entertaining and educational walk. Tomorrow Teena and I are doing another one with Muddy York, Occupy Toronto, The Original Version, The American Occupation of York. We`re looking forward to it!

On the way home, I took this picture with the second fort`s cemetery in the front and Toronto in the background. I thought it was an appropriate picture to finish the day. 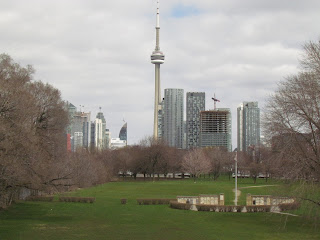