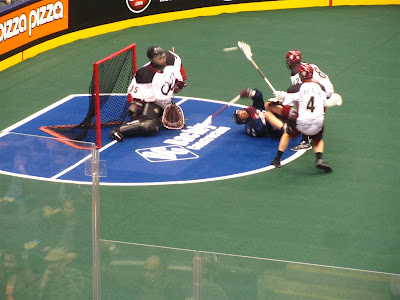 Tonight Teena and I were at another Toronto Rock game and what a game it was!

The Rock went into the game on top of their division with a 6-3 record. The Colorado Mammoth entered the game having only won 2 games out of the 8 they had played. One would think this would and should be an easy win.

It was anything but.

I have only been to maybe a dozen games but I have never seen anything like tonight. It was a game that had almost everything.

First off, Teena and I were sitting in the middle of a crowd of rabid season ticket holders. It was so much fun! Yelling, cheering, jeering and, of course, high fives all around after every Rock goal. These are the fans that teams crave and it is the best place in the arena to sit! 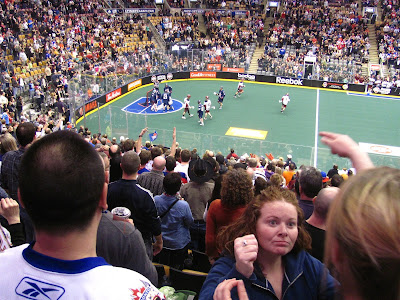 Teena and I talked about it after the game and as much as indoor lacrosse is a fast, great exciting sport, the Rock fans everywhere in the ACC make the game even more fun and there were 10,823 of them!

Back to the game. 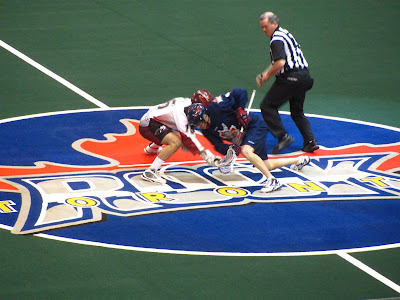 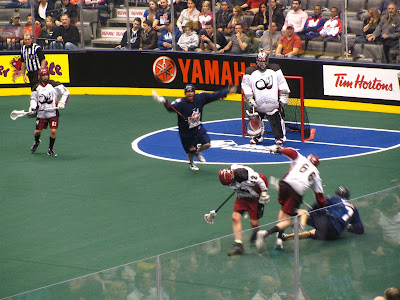 The Rock popped in the first goal and the fans were in a party mood. Then the Mammoth went to work and quickly put in 4 goals in a row to really silence the crowd. Before the end of the first quarter, the Rock scored another to end the quarter down 4-2.

The Rock Cheerleaders came on at the break to get the crowd back into the game. 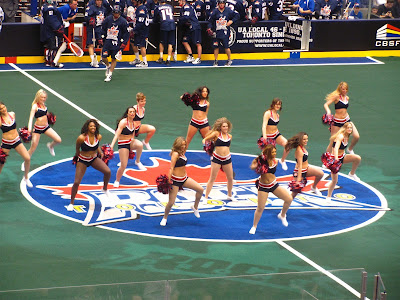 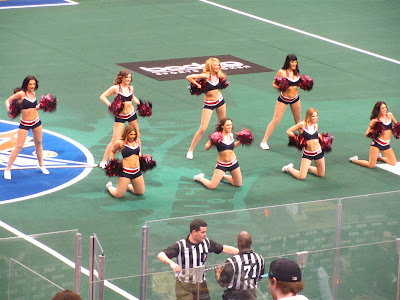 The second quarter was owned by the Rock who went on a streak of their own. After chipping away at the Mammoth to be down by 2 goals 6-4, they then went on a 5 goal streak and went into the dressing room with a 9-6 lead.

Oh, Teena's blog picture of me from last year made the scoreboard again. Third game in a row! 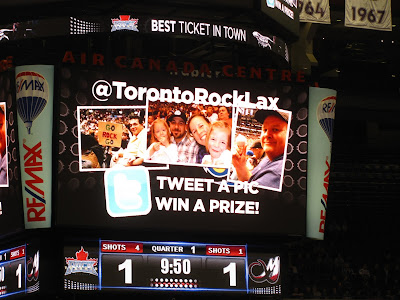 Colorado played a tough game and it became a little chippy. At the end of a low scoring third quarter, they made a goal back and went into the final frame down 11-9. As always, there were contests played in stands for the crowd. It's never boring at a Rock game! 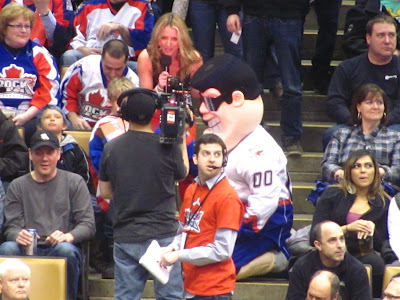 The last frame was exciting and interesting!

Colorado tied it with a behind the net goal 11-11 but Toronto threw a challenge flag and the goal went under review at the bench. 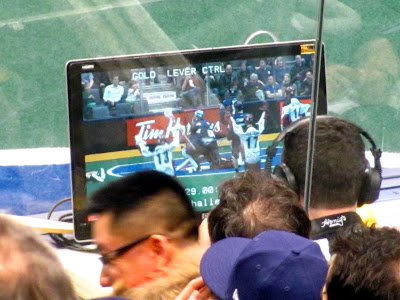 The goal was called back as the goal scorers foot touched the crease. The fans loved it!

Toronto took advantage and scored a goal of their own to extend the lead by 2. Then the frustration hit. Toronto scored, or as it went down, Toronto took a shot, a Mammoth player caught the rebound, lost control and flicked it into his own net!

The refs called no goal. The fans exploded.

Then the Rock, undeterred, came right back and scored again. The Mammoth bench threw a challenge flag and the Rock again lost the call. They still had a two goal lead with about 5 minutes to goal but would the wheels come off with the frustration.

Rose, or "Rosy" as we love to yell after every save, started coming up big. I felt he let in one or two soft goals in the first half but as he has shown all season, he is a stonewall at crunch time and stopped everything fired at him. 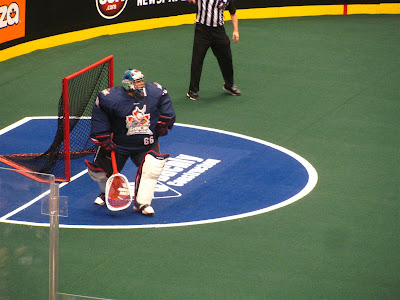 With just 17 seconds to go in the game, Jesse Gamble earned a penalty shot after being basically mugged in the Colorado end. He faked a shot (faked me out too as I took my shot) then flipped the ball behind the Mammoth goalie to seal the game at 14 -10. 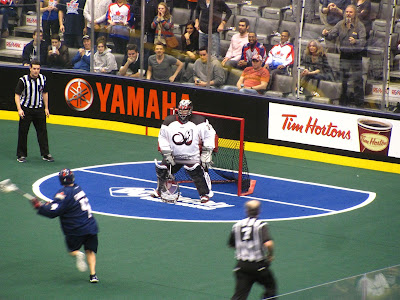 As usual, the Rock went around the arena and saluted the fans. 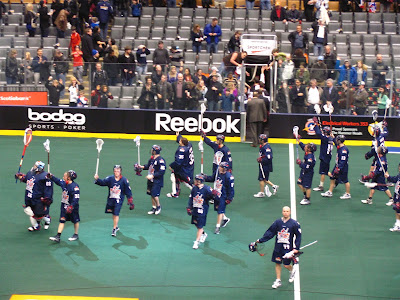 Once again, the game, the fans, were a fabulous experience!

Problem is we left our seats and went right to the ticket boot to buy our tickets for the next game ... they were closed! Nobody there. Nobody!

Others came and too were astounded.

After a great game, that is the perfect time to sell tickets for the next game. Can't do that if the ticket office is closed. I am not sure if it is a problem with the ACC or the Rock. The game did go late due to all the review delays but still fans can't buy tickets when they are all fired up and can't do that if nobody is there to sell them a ticket.

We'll be a t the next game for sure. Somebody just made it harder for us!

Let me just finish saying that the Rock have the best record in the league and their advertising is true, it is the best ticket in town!