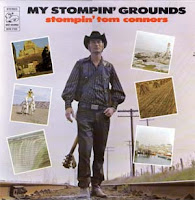 I was and am a big Stompin' Tom Connors fan and have been since the first time I heard him way back in the 70s.

There are very few celebrities or performers who I get really upset and sad about when I hear they pass away.

This is one of those times. Stompin' Tom passed away today at the age of 77. In a message posted on his website, apparently a few days ago, he said Canada “inspired with its beauty, character, and spirit, driving me to keep marching on and devoted to sing about its people and places that make Canada the greatest country in the world.”

I remember driving down to my cousins' farm north of Belleville, ON, with my buddy, Ken, in his Dodge blasting out tunes from the eight track album (to the left). It was always fun.

He was an icon for the nation and yet radio stations refused to play his music in any era. I saw him three or four times in concert, once in the early 70s and a few times later. The 70s one was the best, not only because it was my first time seeing him, but what he brought to the show. He was all for Canada and Canadian talent and was not afraid to show it.

In the show, he brought on a young Canadian fiddling champion, a country dance champion (might be stomping, which would fit), a yodeling champion and worked them seamlessly into his show and the crowd loved it.

I remember the last concert at Massey.  At times he forgot some of the lyrics but nobody cared as they all were singing along. At the break, he auctioned off his banged up and gouged stompin' board (after dumping off the sawdust) to charity for $10,000!

I think he wrote two autobiographies. I read the first one which was quite long. The first third of the book was not too interesting but the rest of the book about his travels back and forth across Canada before he made it big was very interesting. He said every time he went to a new area, town or city, he wrote a song about it.

Canada lost a great person today and I cannot post a link to his website as it is too jammed which shows you how well loved he was to this country.

He is to Canada what Johnny Cash was to the U.S.

He is on my iPod and whatever new technology comes along, he will be there too.

Hey, Stompin' Tom! Thanks for all the great tunes about our nation and the memories.