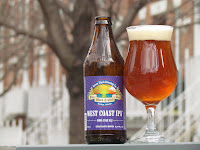 I am a fan of the LCBO when it comes to beer. They do a great job of bringing in a vast variety of beer from around the country and the world.

You would think that job would be done better by The Beer Store, which most people think is government-owned but is, in fact, owned by Anheuser-Busch InBev, Molson Coors and Sappor and have little  desire to bring in any competition to their own brands.

This month the LCBO is featuring IPAs which I love so I picked some favorites up that I have had before plus a new one, West Coast IPA from Green Flash Brewing Company .

Green Flash Brewing was started in 2002 by two married former pub owners, Mike and Lisa Hinkley. The company originally was located in Vista, CA, before moving 45 miles down the road to its present location in San Diego in May 2011.  The company just announced this month that they are opening up a second brewery across the country in Virginia Beach,VA. Plans are that the 58,000 foot brewery will be operational in 2015.

So, how about the beer?

This 7.3% APV ale pours a coppery colour with an off white head. There definitely are hops to the nose with this one, a little floral plus a little citrusy. It is a West Coast-style IPA with lots of hop bitterness throughout. First comes a nice citrusy bitterness which I love but the ale finishes with a long pine needle bite and there is nothing  wrong with that. I love when a beer layers its taste and this West Coast IPA does that very well.