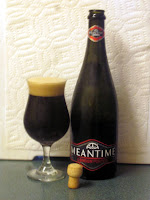 To me, a porter is a beer for winter. It's a little heavier and full of taste.

The truth is that porter once was the year round beer of the working man of London back in the 1700s. This week's Beer of the Week, Meantime Brewery's London Porter, is supposedly based on a recipe from that era, circa 1750. I say "supposedly" only because I believe this will be a more refined beer than ones made over 260 years ago.

I bought this beer before the snowstorm hit Toronto so for me the timing to crack this one open and give it a try was perfect.

Meantime Brewery was first thought of by Alastair Hook and a bunch of friends back in 1999.  A year later they were brewing beer just down the road from where he lived in Greenwich about 20 minutes away from central London. The owners were pretty aggressive and a year later opened their own pub, The Greenwich Union, a pub that sold no national brands, just their own and craft beer only.

In 2004, Meantime was the only British brewery to win medals at the World Beer Cup, taking a bronze in the Vienna-Style Lager Group and another in the German-Style Märzen/Oktoberfest group. Not bad for a four year old brewery!

By 2010, they needed to expand so they moved into an Old Naval College and opened a larger brewery capable of brewing 25,000 barrels of beer per year and could be expanded to 100,000 barrels per year.  The brewery, called the Old Brewery as it is built on the site of old brewery that dates back to 1450, is also a restaurant and from looking at the pictures is gorgeous! It's a place I'll definitely try to get to if I'm ever in London again!

I love the fact that the bottle comes corked with a wire mesh. There's something fun about that! 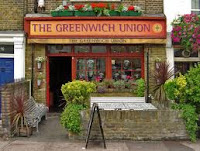 The beer pours black with a brownish head, not as creamy as a stout, but creamy none the less. Chocolate really comes through in the aroma. When I first sip it, I do taste chocolate but that taste disappears quickly and a bite of coffee comes in to take its place in the finish. I may or may not be correct in this but I believe it is the harsher finish that distinguishes a porter from a stout.

Over the past couple of years, I have become a fan of porters, although I still find them a winter brew and Meantime makes one great porter! One day I hope to visit the Old Brewery and The Greenwich Union, and when I do, I would love to order this on draft or cask!