On the Big Screen: Singing in the Rain!

When I was growing up and not yet old enough to work, I made money mowing lawns and sometimes babysitting for the couple across the road, usually at New Years. It seemed every New Years back then, there would be a station, one of only four we got at the time,  showing Singing in the Rain.

I enjoyed the movie then and was quite excited when I saw the Scotiabank Theatre was showing it on the big screen. I told Teena about it and she asked, "How many times have you already seen this?" Well, I've seen the 1952 classic a few dozen times but never in its original format on the big screen! She did not share my enthusiasm for this film so I headed out to see it on my own.

That was a week and a half ago. I got there a half hour early and the picture was SOLD OUT! Instead I saw Total Recall, an excellent movie, yet it wasn't sold out. I found the picture was playing today so bought my ticket more than a week in advance to ensure I would not be disappointed yet again.

Good thing I did as it was sold out AGAIN!

This 1952 MGM picture is the American musical that consistently ranks among the 10 best movies ever made. It's not only a great song-and-dance piece starring Gene Kelly, Donald O'Connor, and a sprightly Debbie Reynolds; it's also an affectionately funny insider spoof about the film industry's uneasy transition from silent pictures to "talkies." Kelly plays debonair star Don Lockwood, whose leading lady Lina Lamont (Jean Hagen) has a screechy voice hilariously ill-suited to the new technology (and her glamorous screen image). Among the musical highlights: O'Connor's knockout "Make 'Em Laugh"; the big "Broadway Melody" production number; and, best of all, that charming little title ditty in which Kelly makes movie magic on a drenched set with nothing but a few puddles, a lamppost, and an umbrella.

I haven't seen it in a couple of years and forgot how corny much of it is. The story line is rather thin with lots of singing and dancing put in almost as filler. The whole beginning where Don Lockwood tells his life's story is a little long and again an excuse to sing and dance but once past this point and into the actual story, I really enjoyed it. I enjoyed seeing how much scrambling the studio does to attempt to make i's very first talky and much of the mishaps, along the way are quite funny. It was hilarious to see the attempts to have the mikes placed around to pick up the actors' lines. I imagine much of this happened in real life to many studios struggling with this new technology after the release of the Jazz Singer, which quickly killed the silent film. 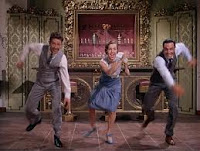 I thought Donald O'Conner was great in this movie as was the king of dance, Gene Kelly. Although famous for its title song and Kelly singing and dancing in the rain, there are other great tunes, "Make em Laugh" and "Good Morning". I forgot all about "Moses Supposes" until I saw it today.

Interesting for me is that as much as I like this movie, I really do not enjoy movie musicals. I used to do a top 5 list on Facebook every Friday and when I did movie musicals, it was a stretch for me to come up with 5 which were:

A great movie which I am so glad I got to see on the big screen. Beforehand there was a short documentary showing an interview with Debbie Reynolds about the movie and working with Gene Kelly and Donald O'Conner, plus some excerpts from an interview with Donald O'Conner from a TCM introduction to the 45th anniversary showing of the film. I didn't think I would like it but it was humorous and provided some great background to the movie. For instance, I never knew that this was Debbie Reynolds first starring role and when she was told she had the part, never knew how to dance. You would never know that by watching her in this film. That's what eight months of training, six hours each day can do!

It was a great experience seeing this on the big screen. I was in the third row from the front as the theater was packed. The audience clapped after each song and at the film's end.

In fact, I am still humming and singing the title song. Come on, sing along with me!