Beer of the Week - Ch'ti Blonde 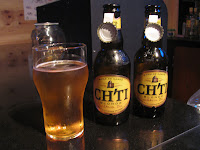 Everyone knows that France is well known as a wine country.

There are only two French beers available in Canada, 1664 Kronenbourg, owned by the Fosters Group, and Boris Beer which I have already featured as a Beer of the Week. Being such a huge wine country I thought that those two companies may be the only French brewers.

I spent a day in St Malo, France, a few years ago when I was fencing in Jersey and the only beer any place carried was over priced Stella. No French beer at all.

Last week when Teena and I were in Saint Pierre, a little piece of France that sits on this side of the ocean, I made a discovery. We were at La Chauve-souris, which on the sign said it was a beer bar, and at first I was disappointed by the usual beer choices. I wanted something hoppy, not surprisingly and Roman, the owner of the bar, suggested that I try a craft beer from France, Ch`ti. I was surprised to find out that France had a craft beer industry. It is a very small group of only nine brewers, but hopefully growing. According to the French craft brewers website, in the 1890s there were 2,372 brewers in France. Two world wars reduced that to a dozen. 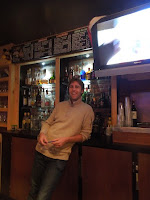 I had some trouble researching the history of Ch`ti, pronounced sh-tee (I think I have only ever pronounced it correctly once but Roman always knew what I wanted) as much of the material is in French. My understanding is that Castelain Brewery, which makes Ch`ti, opened in 1966 and was taken over by the owners two children, Annick and her brother, Yves, in 1978. The next year Ch`ti Blonde came to market. The brewery is located in Bénifontaine, a small community of under 300 people in northern France up by the Belgium border.

Ch`ti Blonde weighs in at 6.4%, which is why Roman calls it the party starter! It won the silver medal at the 2010 Paris Concours Général Agricole.

It pours golden in colour with a white head which dissipates quickly. There is a sense of hops in the aroma. Interesting is the way the cap stays attached to the bottle as it is attached to the label around the neck of the bottle. 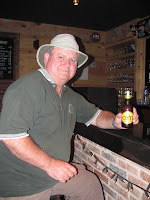 I usually do not favor blonde ales as I find them a little too sweet but enjoyed this one. I have heard the  term "biscuity" used to describe a certain taste in beer but until now have never noticed that flavour but it is in this one at the start. Then the hops take over and help with the long but not overly bitter finish.

After drinking nothing but wine since arriving in Saint Pierre, having a nice hoppy beer on a warm night was quite welcoming. If it was available in Canada, I doubt I would be bringing any home but it certainly was my beer of choice while in that little part of France just off the Newfoundland coast.