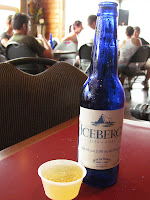 Last Saturday, Teena and I took a cab over to Quidi Vidi Harbour to visit Quidi Vidi Brewery, take the tour and try a few samples.

The brewery sits on a very picturesque harbour in a reconstructed building that once was home to a fish processing plant. The plant was closed and abandoned after the cod moratorium was issued to prevent commercial cod fishing to try to bring back the fish stocks.

I originally thought that the brewery was brand new as I never had heard of it until they came out with Iceberg Beer this year.  However, I found out during the tour that I was very wrong. The brewery has been around for years, opened in 1996 by two engineers, David Rees and David Fong, who worked in the offshore oil industry.

The industry had taken them to various places around North America.  They noticed an increase in interest in the craft brewing industry and thought it might be a good fit for them and help to create new jobs for the area. So they hired a brewmaster, refurbished the old fish plant and started brewing. Today Quidi Vidi is the third largest brewer in the province behind the multinational breweries Labatt and Molson's. 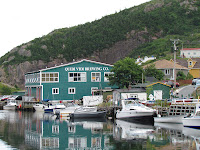 Two years ago, an iceberg floated into the mouth of Quidi Vidi Harbour, became grounded and blocked the harbour until it was broken up by the wind and heavy waves. Seeing it gave David Rees an idea. How about brewing a beer made with water from an iceberg?

Is it just a gimmick for sales? I would say no.

I have read many articles since about iceberg water and they all say the same thing. First there is almost mineral content in the water. Second, icebergs are made from snow which has been compacted for 25,000 years and traps thousands of tiny bubbles. Apparently there is an old Newfoundland trick of keeping a chunk of iceberg in the freezer, then breaking off a chunk and adding it to any drink, creating an extra fizz that you wouldn't get from a normal ice cube. 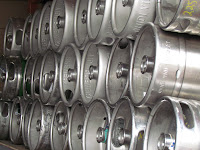 The brewer played around with various recipes for beer made from iceberg water and finally launched their new Iceberg Beer this past spring. It is sold in a very nice blue bottle and the brewery is having trouble keeping up with demand.

They also came upon and unusual problem. The beer is sold in a very unique blue bottle, that people love and are reluctant to return for deposit. Almost no bottles were returned, even though the brewery offered 20 cents back per bottle despite only charging a 10 cent deposit. This didn't help ... in fact, two bottles came home with us! 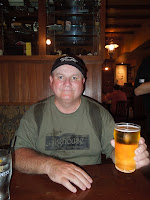 So with a new batch brewed, they are now focusing on selling it in draft around the province. They still find demand hard to keep up with.

I have had it as a sample during the tour (the top photo), from a bottle at a bar and on draft and could find no difference in taste. It pours a light yellow colour with a light white head which dissipates rather quickly. The beer is quite clear and lively, almost a sparkling beer. There was no aroma which I could detect.

It is hard to describe the taste. The beer is lightly hopped and light in taste but the taste is there. It is lightly sour, maybe lightly bitter in its finish. Although it had a very light taste, something I don't usually find attractive in a beer, I loved this one. At the brewery, we could only have a couple of tastes and when Teena and I went to get some beer to sip on at the picnic tables by the water, we found they were sold out. 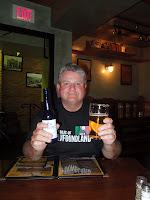 If I didn't like it, I sure would not have ordered it again but I found it deliciously refreshing. Teena and I walked around and down Signal Hill and when we finally stopped back in town, the first thing I ordered was an Iceberg draught! Later that night I had it again with supper, this time poured from the bottle.

As much as I like hoppy ales, and pilsners with a snappy finish, I really enjoyed this light tasting beer and if I lived in Newfoundland, it would be a summer regular in my fridge.