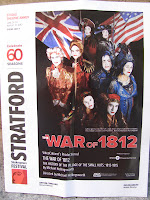 Today Teena and I took the train to Stratford to see The War of 1812, which is playing at the new Studio Theatre Annex.

When America declares war on Britain and her empire, a Native confederation led by the Shawnee chief Tecumseh defends its own territory by joining in the defence of Canada. After three years of bloodshed on land and lake, the Yankees have burned York, the Yorkees have burned Washington, and everyone has burned the Natives.

This is part of Michael Hollingsworth's series of plays, The History of the Village of the Small Huts, which "is a satirical retelling of the nation’s history, tracing the evolution of the Canadian 'identity' as a comedy of manners". It is my first time seeing one of his productions and going in I wondered how a cast of nine on a small stage could do a teo hour play about a three year war and do it well.

The trick is to use every inch of the stage, lighting, costumes and writing in a very clever way. The production is interesting, entertaining, humorous, campy and factual. Hollingsworth uses a different stage which two or three levels and a small wall in front so characters can pop up or disappear down.

The costumes were over the top and wonderful. Having read extensively about the War of 1812, I went in knowing about the major figures of the war. I loved how Hollingsworth made a loud caricature of the main characters, except for the one of Tecumseh, and rightfully so. My favorite was the character of James Fitzgibbon, who led a band of guerrilla-style fighters known as "Bloody Boys" during the conflict.

I believe that someone who knows nothing about the war could go see The War of 1812 and not only be thoroughly entertained, but also would leave the theatre with a good basic understanding of the conflict and those involved.

There are not many plays that I would go see more than once but this is definitely one of them.
Posted by Swordsman at 23:05