Fencing at the 2012 Can/Am Veterans Cup 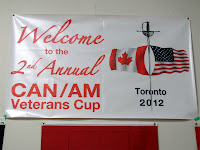 Today was the second annual Can/Am Veterans Cup, which was held at the Toronto Fencing Club over the course of the entire weekend.

Last year the inaugural event was held in Kingston. This is the largest veterans only (40 years old or more) held in North America. 172 fencers from Canada, the US and even a couple from Hong Kong were entered.

For me, this was my return. Due to a knee injury, I have not competed since last year's Can/Am cup and really have only been practicing regularly for about five weeks. It was time to get some rust off.

I started off against a fencer named Koscow. I quickly got up 2-0 on him before he scored a touch. Then a weird thing happened. He has the newest of masks, required if fencing in Europe with a glass pane over the eyes instead of the full mask. Three times in a row I struck it, and, of course being glass, does not conduct electricity and does not set off my scoring light and he got the points. Three in a row. Now I found myself down 4-2 in a match to 5.

So I attacked only the body and scored 3 points in a row to take my first match in more than a year. 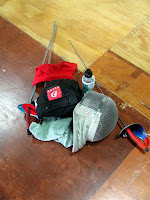 The next match I lost to my old coach, Perry, who has a lightning face arm on defence, scoring 3 points on me that way. I won the next 5-1 and was skunked the next one 5-0. My fifth match found me in a 4 all tie. I went on defence intending to block his attack and strike back (parry/repost). His attack was slightly faster than my parry and he won 5-4. Note to self, always attack when it's 4 all!

I won the last match and finished the pool with 3 wins, 3 losses and sitting in 13th spot out of 26 fencers.

The elimination round did not go well at all. I was down 5-3 at the break, in a match to 10, and in the second half tied it up 5-5 before losing 10-6. I fenced very poorly in that one against an opponent I should have easily beat. Shows what a year off could do.

I came in wanting to get off some rust and accomplished that. Today told me where I stood against fencers my age who have been competing all year. It also showed me how my knees can stand up to the beating and found they can. With more work and exercise, they will be stronger to do more than one tournament in a weekend. My right deltoid, elbow and shoulder, all things that have given me problems, were great today.

Although my posted results today were not great, I find all the above a success. I made some great moves and some dumb ones.

It was a great fun day. It's great to be back!

Here I am, a little chunkier than I would like to be when I fence 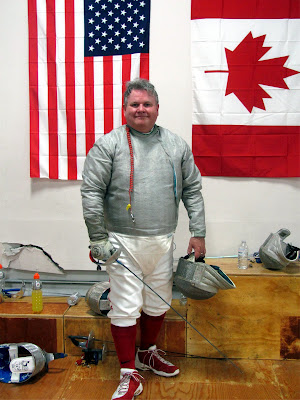 We had to put our fencing bags at the back of the room. My bag is in all this 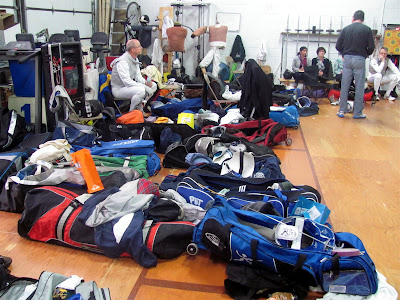 Vince and I. Vince fences with me at Bladeworks Fencing Club. 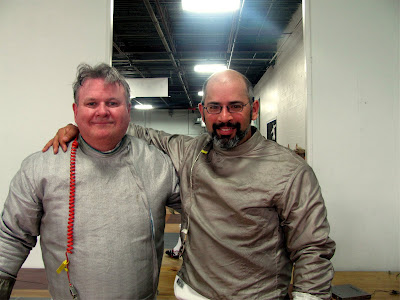 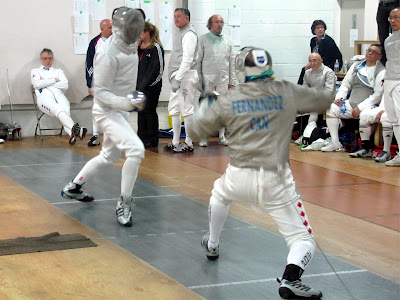