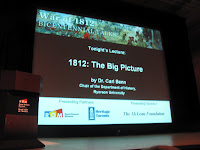 Tonight was the first of a series of lectures, debates and conversations commemorating the Bicentennial of the war of 1812.

The series is being put on by Heritage Toronto and runs over the next seven weeks and all events are free. As I have a huge interest in the subject, I hope to attend most of them. Tonight's lecture was held at the Royal Ontario Museum (ROM) with Dr Carl Benn as the lecturer.

The War of 1812, which engulfed United States, Great Britain, her Canadian colonies, and the First Nations of the Great Lakes and upper Mississippi regions, was a dramatic and formative event in North American history. In this illustrated presentation, Carl Benn explores the war’s complex origins, confused campaigns, and misunderstood conclusions in order to clarify the course of the conflict and its larger historical meanings. 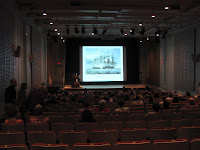 I have read all three of Dr Benn's books on this subject, Historic Fort York (1993), The Iroquois in the War of 1812 (1998) and The War of 1812 (2002). Dr Benn is the Chair of the Department of History, at Ryerson University and was Chief Curator of the City of Toronto’s Museums and Heritage Services.

Not knowing what to expect and knowing that I had to register ahead of time, I was still surprised to find a "Last Minute" ticket line outside the ROM School entrance. The Eaton Theater was huge and when Dr Benn took the stage was mostly full with about 250 to 300 people in attendance.

Dr Benn spoke for an hour and afterwards took about 35 minutes of questions. I found him to be an excellent speaker, totally at ease with the subject. He was interesting and had a good sense of humour. 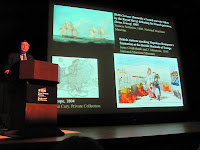 I think I am well-versed in the subject but do not consider myself an expert by any means and learned much during the night. For instance, I thought that in ocean battles the Americans hammered the British. Turns out that the Americans like to concentrate on battle the USS Constitution fought and the actions of their frigates. In frigate battles, the U.S. navy won five out the six battles fought. But the final score for ocean battles between the U.S. and British navies ... it was a tie, both won 13 engagements!

Also having just done a tour of Fort York with Teena on Sunday and hearing the reasons for the attack on York (Toronto) by the Americans in 1813, it was interesting to hear Dr Benn's view, which brings about the whole picture.

René Malagón at the fort explained how this was a raid by the Americans to capture two ships and naval stores. Very true!

Dr Benn, in answering a question from the floor, explained how Washington wanted an attack on Kingston. Kingston, though, was being heavily reinforced and after a flurry of back and forth letters, it was decided to go attack York, to capture the two ships to bolster the American fleet to gain naval supremacy on Lake Ontario and to capture naval goods. 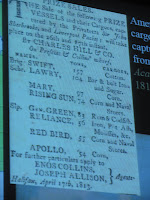 Behind these reasons were that New York was having an election and the politicians wanted and needed a victory to ensure that the public would vote in a government that would support the war. This was especially important as New York state was on the front lines. So for great political publicity of raiding and capturing the capital of Upper Canada ... and to hopefully capture a couple of ships the Americans sent 2700 soldiers plus 500 or so sailors to raid a garrison of about 800. A sure victory indeed.

Also not a person took part in the invasion that was from New York. They were left behind to vote, and ,yes, the party that supported the war won!

It was a very interesting evening, and I look forward to more like it.

Upcoming events in the series are:

TECUMSEH AND BROCK
James Laxer on the two greatest heroes of the war
Bloor/Gladstone Branch, Toronto Public Library
Sunday, June 17 - 2:00 PM
A Luminato at the Library Presentation
Posted by Swordsman at 20:37