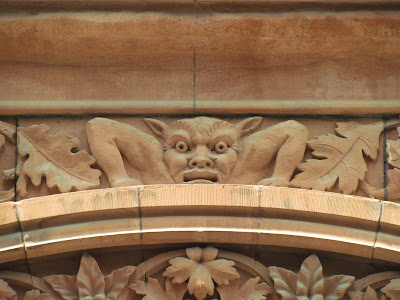 This afternoon Teena and I did a walking tour which was a part of Doors Open Toronto.

I have always admired the artwork and design old-time architects and builders put into the upper floors, no matter how tall. That sadly is missing today with all the glass and steel boxes that now fill the sky. The walking tour was Faces on Places Walking Tour — Gargoyles and Other Architectural Ornaments.

If you look up with author Terry Murray, you'll see beyond glass and steel and stone to spy gargoyles, griffins, dragons, angels, and portraits of important personages. These characters have been watching over Toronto and its inhabitants for centuries.

Writer and photographer Terry Murray spent 10 years hunting the many creatures adorning Toronto's buildings and researching why they’re there. Explore some of that world with her.

It was a very interesting tour. I work in downtown Toronto an Terry pointed out things on places I walk by every day. In fact, buildings which I would look up at and admire the design and workmanship put into the highest floors, Terry pointed out faces and mythical beasts which I had been missing, and actually are quite obvious.

I took 155 pictures today. Here are just a few favorites

Before the tour, Teena discovered that the Observation Deck at New City Hall was opened. I have not been up there in decades. It has been closed to the public since the 9/11 attacks. 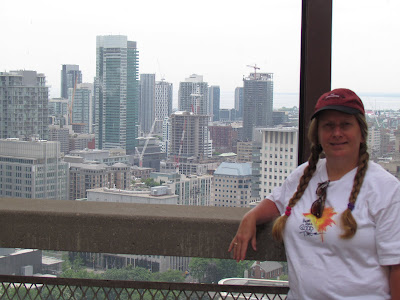 We started at old city hall, which is a vastly interesting building. Teena and I plan to go back and spend a day photographing the building. 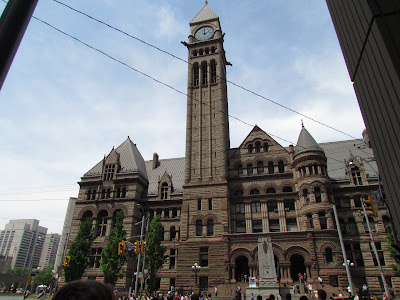 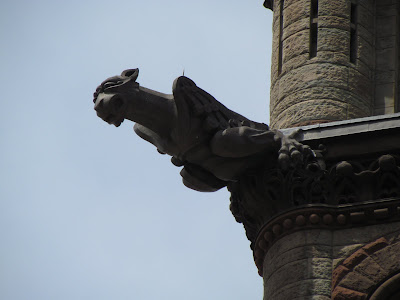 Carved faces are everywhere around the building. Architect E.J. Lennox wanted his name permanently placed on the building but was told he was not allowed to. So he hid the letters "E.J. LENNOX ARCHITECT A.D. 1898" in letters and numbers spaced in the figures under the roof around the building. 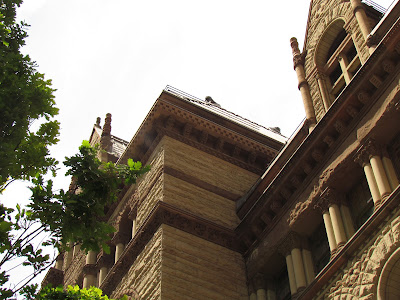 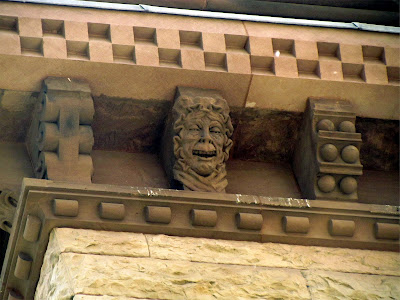 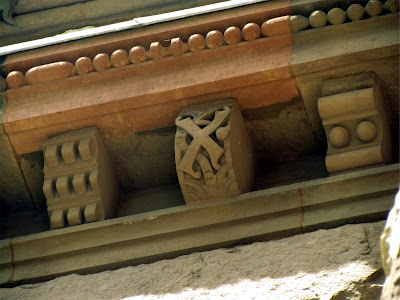 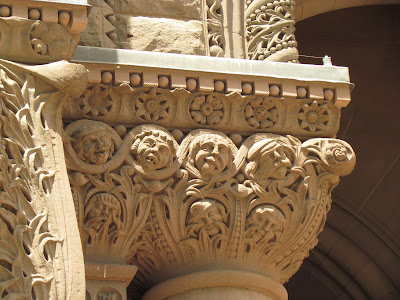 Terry Murray was a great tour guide. Here she is addressing the 26 of us and CTV news. 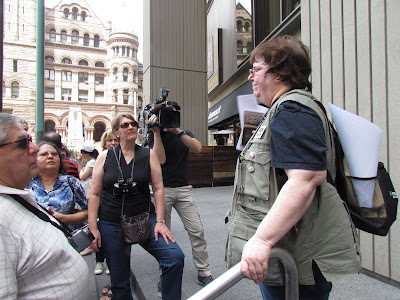 This figure is on the Sterling Trust Tower. Built in 1928, this figure screaming into his phone, is about 10 stories above the ground. As the building housed brokerage houses and the building was built at the start of the great depression, it is thought this might be a joke of the times, a broker yelling "Sell! Sell!" 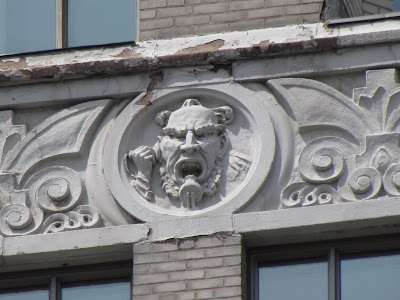 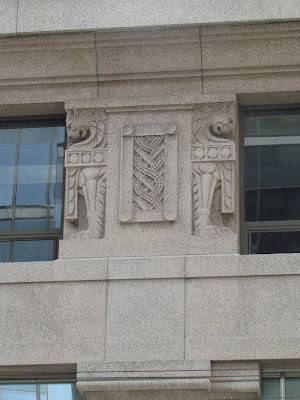 On the Canada Permanent Trust building. 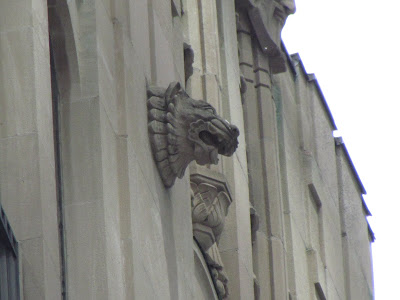 Above the windows of the Scotia Bank building are carvings of Greek Gods and Goddesses. 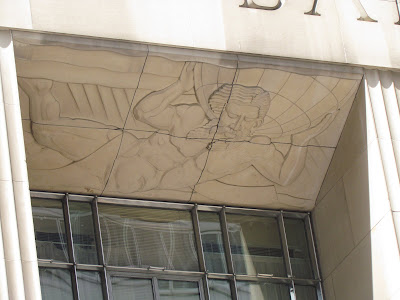 The CIBC building was amazing. So many details including huge bearded faces atop the building. 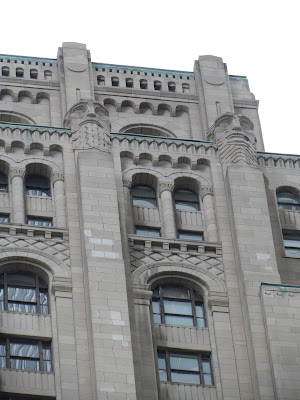 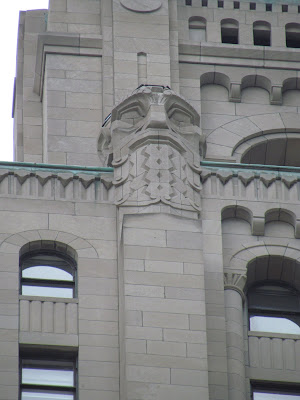 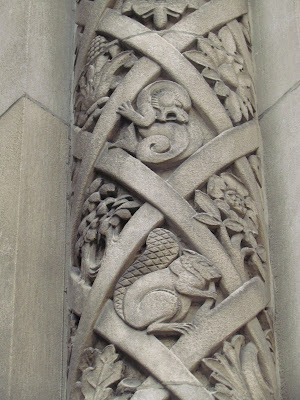 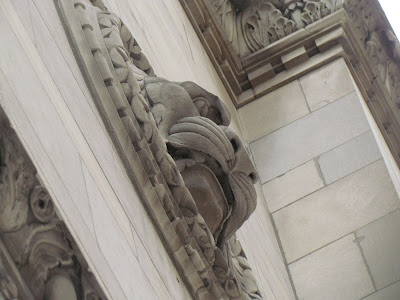 The Irish Embassy Pub used to be The Bank of British North America. Hercules guards the main entrance. 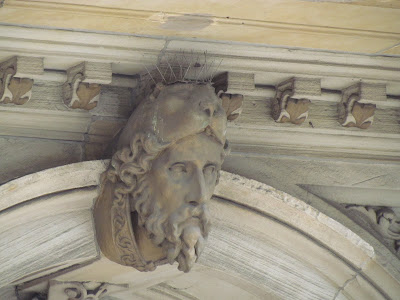 After a few more buildings, we ended up at the Ed Mirvish Theater built in 1920. Gargoyles and figures adorn the front. It was a great place to finish a great tour. 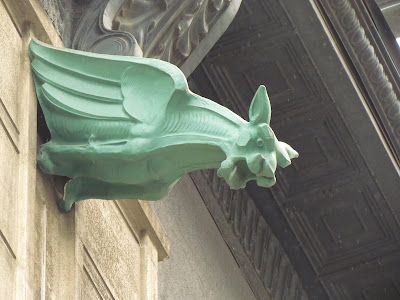 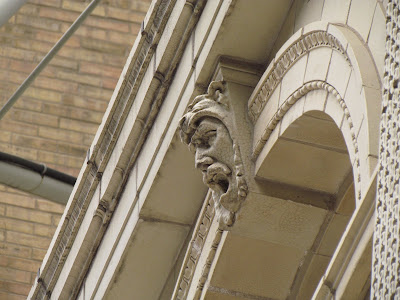 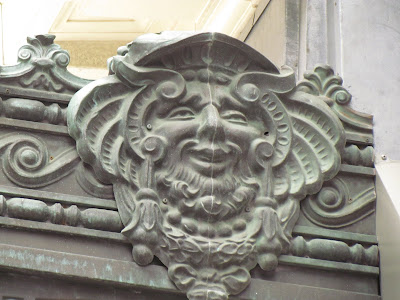 Very cool. Thanks for sharing.