Beer of the Week - The Beers of Belle Gueule 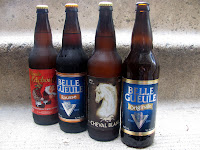 Teena's job requires her to travel and when she does, she usually comes home with new beer for me to try.

On Victoria Day weekend, she and her sister, Sarah, traveled to Mont Tremblant, QC, for a vacation. Once again she came home with beer from a new brewery for me to try. Four beers from Belle Gueule Brewery or, as it is known in the province, Les Brasseurs RJ.

One problem is that language laws in Quebec require companies to list everything in French first then English. Right now the French version of the website is up but the English version is not yet available. Frustrating for me as I do not know French so had to rely on Teena and some French speaking people we know.

I heard Belle Gueulle translated different ways. One way was "Beautiful mouth", another was "nice mouth". Hmmm! I love this explanation from one of Teena's friends, Helene ... "a guy in a bar with a few too many brewskies trying to pick up a chick: "Tu as une belle gueule!" meaning he likes her mouth and wants to make out with her. When a guy says "tu as une grande gueule", it means you have a big mouth ... shut up!"

I'll try not to use either when in Quebec.

All I could find out about the company was that three breweries ... Les Brasseurs GMT, La Brasserie Le Cheval Blanc and Les Brasseurs de l'Anse ... combined in 1998 to become Belle Gueulle Brewery.

So let's try some beer.

The beer all comes in 660 ml bottles so as I had four days off, I tried a beer a day. 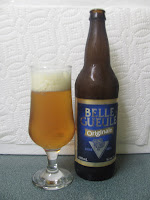 This is a lager but pours darker than many other lagers, being more coppery in colour with a white head. I detect floral hops in the aroma. White lacings do line the side of the glass when I take a sip.

It is a little heavier in mouthfeel than I like a lager to be. There is nothing much to this beer. It starts with a weaker taste than I thought it would due to the colouring and finishes with a little bitterness but not much. Overall a so-so lager. I wouldn't recommend this one. 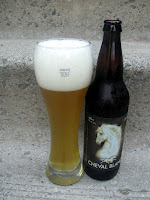 The label on the bottle states that this beer is "a finely bubbled beer made from wheat and barley." I'll have to see what they mean by finely bubbled. Cheval Blanc is French for White Horse, which is why there is one on the label.

The beer pours a cloudy yellow as it is unfiltered with a fluffy white head that reminds me of meringue. There is spice, banana and perhaps citrus in the aroma. It was a hot day and this beer looked very refreshing. I see what they mean now by "finely bubbled" as the bubbles which rise from the bottom of the glass are very small compared to regular beer bubbles.

This is a nice Belgium style wheat (white) beer. Although I thought I detected citrus in the aroma, there is none in the taste. It is slightly spicy with a note of banana. Usually I am not a big fan of Belgium whites. I enjoy wheat beers that has some citrus brewed in it (not added afterwards with a slice on the rim. If the brewer wanted that flavour in their beer, they would have added it themselves!). I do like this one, though, although I would not have more than one in a sitting. 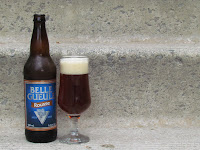 Rousse is French for russet red, which is a dark brown colour with a reddish orange tinge. The colour of this beer does fit that description and pours with an off-white, slightly brownish head. The head does dissipate quickly leaving behind very little lacings. From the beers I have had from this brewery, I blame the glass and not the quality of malt.

I don't have many brown ales and this one is quite nice . It is very flavourful, starting with some sweetness but finishing with a decent hop bite at the end.

This is a beer I would have again! 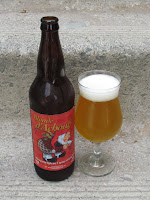 The Blonde d'Achouffe weighs in at 8% APV. This one bottle is like drinking four bottles of a light 4% beer!

The beer pours cloudy and is a darker shade of gold. The head is amazing. It is creamy white in colour and lasts forever. It never seemed to dissipate and was full of carbonation. There was spice in the aroma along with some citrus from the hops.

When I took my first sip, the spiciness comes through. I find the spice a little too heavy when I first started but became used to it by the end. Of course, a spicy strong beer is more suited for a cold winter's day, not sitting outside on a hot sunny afternoon.

I would definitely have this beer again but on a much colder day.

Overall I enjoyed all the beers except for the Originale and would be happy to try any other beer from this brewery.

It would be nice, though, if they could get the English working on their website.