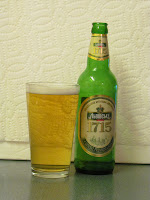 This is the first beer which I have had from the Ukraine.

In fact, out of 158 Beers of the Week, Lvivske 1715 is only the fifth Eastern European beer which I have tried. Let's see how it does.

Beer had been brewed in Lviv Ukraine since the 1400s. In fact, the Guild of Lviv Brewers created their first statutes in 1425. In 1715, Count Stanislav Pototskyi who had allowed Jesuits to settle on his land, requested that they build a brewery “to brew our own and good beer”. So Lvivska Brewery became the Ukraine's first official brewery.

In 1996, a company called BBH decided to get into the brewing business by buying out Slavutich brewery and two years later bought out Lvivska Brewery. In 2008, Carlsberg took over 100% ownership of BBH. Not a bad move for the company as the Ukrainian beermarket is the second largest in the CIS,or  the former Soviet Union.

One interesting thing about this beer is that when brewed for the home market, it is 4% APV, but for export to North America, it is brewed at 5% APV

So, what about the taste?

The beer pours light yellow in colour with a white head. The head did not take long to dissipate and left behind nice white lacings. There are some floral hops which come through in the aroma.

This is a very nice lager. It starts a little watery in the mouth feel but finishes with a nice crisp finish with a pleasant hop bitterness, not over powering but just right for a lager. It would be a great refreshing beer for a hot afternoon.

My experience with Eastern European beers have all been with lagers. Looks like this region of Europe knows how to make them well!

Labels: Beer of the week, Ukraine