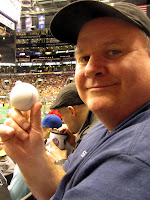 Last week I was at the Toronto Rock game with some people from work in a Platinum box.

I enjoyed it so much that I bought tickets for Teena and I for tonight's game against the Washington Stealth. Even though I have only been to 4 or 5 games since the Rock was formed (I have no idea why ... it's such a great game!), I don't think I have ever seen the Rock lose. The Stealth have only won 1 game so far this season and lost 6, so no reason the streak could not continue.

Well, we quickly were down 3-0. We fought back to make it 3-2 but that is as close as we ever got. The rest of the game was an uphill battle and we never once took the lead or tied up the game. It seemed we would work for a goal and seconds later the Stealth would get one of their one. In the end, the Stealth dumped us 14-9.

Still it was fun. I love the game. It is fast and rough, and true fans come to this sport. They are loud, unafraid to cheer on their team (there was a large vocal section of Washington fans) and have fun. 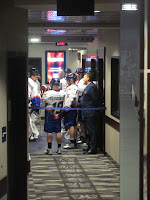 A couple of notes. I thought I got us great seats by the field with a great view of the net in row 5. Trouble is when the play went to the other end, the glass around the arena and players bench got in the way. In the end, we found it better to follow the action on the TV screen above the playing area when the ball was down the field. Can't imagine paying $400-500 for these seats for a Leaf game!

I missed this event as I was off trying to get some better pictures. One of the Rock players' name is Hoar and he scored a goal was I was away. The young guy who was in the seat beside me was very enthusiastic all through the game and yelled out "Hoar, my favorite player!"

There was a guy in front of us who had brought his young daughter to the game but, instead of enjoying the game with her, spent the entire time texting. He took offence to what this guy yelled. According to Teena and the guy, he said the guy was acting like a 9 year old and then swore at him.

So what's worse? A fan yelling out a player's name after a goal (yes, he admitted doing it to be funny) or a dad swearing in front of his daughter. If the dad had said nothing, his daughter would never have noticed. This dad's a bit of a jerk. 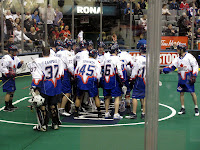 Then a young mother came with some girlfriends to the game, with her baby in a carrier. Her seat was at the end of the row and asked everyone to move down three seats in the row. How selfish is this and who brings a baby to a game!?

So did we enjoy the game? I caught a ball and bought a Colin Doyle - Toronto Rock tee-shirt after the game and Teena and I bought seats for next Friday nights game against the Philadelphia Wings.

***
The Rock are introduced as they come out onto the field. 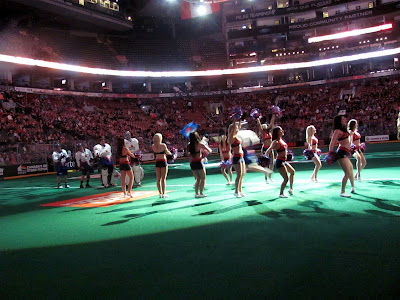 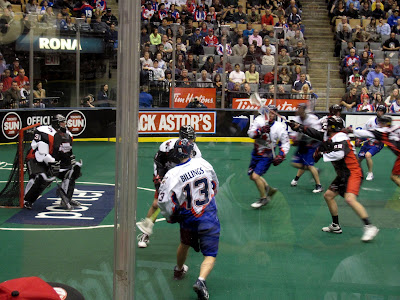 This is the problem with the "great seats" ... can't see the other end. 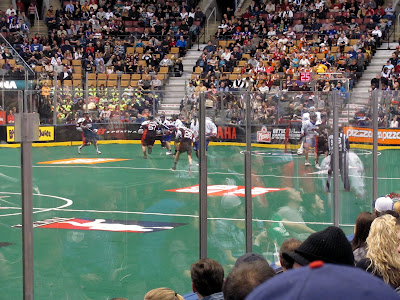 It's a rough game. This is like a mugging. 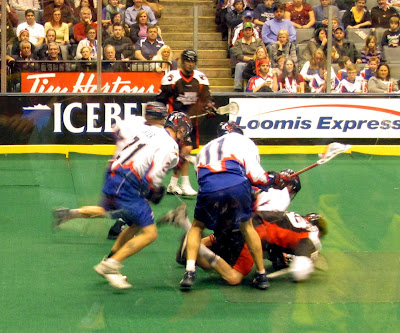 There was a fight (not the uptight dad). 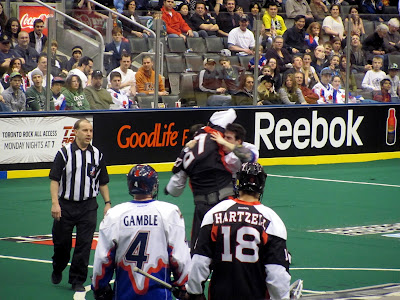 The action is fast and hard to catch on my little camera. Here is a nice elbow to the face. 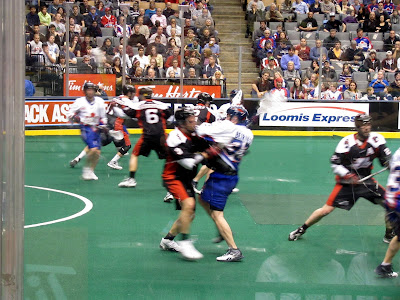