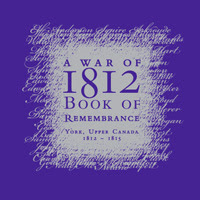 For the next two years, there will be events commemorating that event. Toronto too is doing its part.

Back in 1813, when it was known as York and was the capital of Upper Canada, the town was invaded by U.S. troops who landed in force from 14 ships and captured the town. As part of the bi-centennial events, there is an exhibit at the Market Gallery in St Lawrence Market called "Finding the Fallen: The Battle of York Remembered" that runs from March 3 to September 8, 2012.

Almost two hundred years after Toronto (then the Town of York) was captured and burned by invading American forces on April 27, 1813, the Market Gallery presents Finding the Fallen: The Battle of York Remembered. This poignant and original commemorative exhibit identifies the individual British, First Nations, Canadian and American combatants who died and brings their sacrifices to life. Featuring artifacts, custom-designed maps, first-person accounts and a newly commissioned Book of Remembrance that alphabetically lists the names of all of the fallen identified to date.

Click right here to view The Book of Remembrance online. The book is a listing in fancy script of those who died in the battle, how, when (some died of wounds afterwards) and who they fought with. Here is a sampling:

Unknown
Warrior, First Nations
Mississauga
Killed in Action
27 April 1813
I found it very interesting to flip through and invite you to click on the link above. The exhibit is one that I looking forward to seeing.
Posted by Swordsman at 20:21