Book Review - To Stand and Fight Together 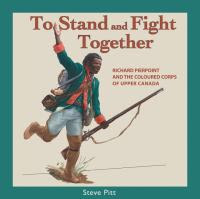 I have toured the battleground of Queenston Heights a few times and there is a plaque there that commemorates the "Coloured Corps" who fought in the battle.

I decided it was time to find out more about them.

In my search I could only find one book, To Stand and Fight Together, Richard Pierpoint and the Coloured Corps of Upper Canada.

In 1812, a 67-year-old black United Empire Loyalist named Richard Pierpoint helped raise "a corps of Coloured Men to stand and fight together" against the Americans who were threatening to invade the tiny British colony of Upper Canada.

Pierpoint''s unique fighting unit would not only see service throughout the War of 1812, it would also be the first colonial military unit reactiviated to quash the Rebellion of 1837. It would go on to serve as a police force, keeping the peace among the competing Irish immigrant gangs during the construction of the Welland Canal.

I gather that there was not much historical information out there about Richard Pierpoint and the Coloured Corp units but the author Steve Pitt did a great job of using every piece of information he could find to create a very interesting book.

The book starts with how the slave trade developed and functioned, then moved on to Richard Pierpoint and how he found freedom in Canada. When war came against the States, former slaves were anxious to fight, knowing that if Canada were defeated, they would find themselves slaves once again.

There also are great notes in the sidebars, explaining different background facts. I enjoyed them as much as the book. The book continues after the end of the War of 1812, and the death of Richard Pierpoint and follows the coloured corps through to the two World wars.

A very interesting book on a little known subject.
Posted by Swordsman at 14:51