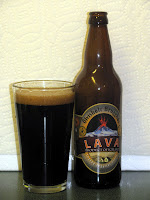 Back in 2010, my friend Sara went on a trip to Iceland, a place I have always wanted to visit myself. When she went, I asked her to bring back some Icelandic beer to try, as I figured this would be my only chance to try a beer from there. She came back with a few for me to try and of course they were featured in 2 Beer of the Week posts. Thanks again for hauling back beer for me, Sara!

This week I saw that our LCBO had a beer from Iceland, Lava Smoked Imperial Stout from Olvisholt Brugghus. I could find very little on the brewery itself except that it is a craft brewery which was started in 2007 in the south west part of Iceland. The brewery was built on a sheep and dairy farm, and has been a traditional farm for (according to the website) a thousand years. Now the farm produces nothing but beer. The land in the picture looks good so I imagine someone is working it.

I wondered why the beer was called Lava. It weighs in at 9.4% APV so was it due to the heat of the alcohol? I hoped not as I find high alcohol beers which you can taste the alcohol and feel the heat are not very balanced or pleasurable.

Wow! Most people never get to see an erupting volcano. They get to watch one from work.

Now I have never had a smoked stout before. According to the Oxford Companion to Beer (OCTB), smoked beers get their smokey flavour from smoked malt. The malt is smoked in a kiln using a hardwood, usually beechwood, after going through the steeping and germinating cycle.

This should be interesting.

The beer pours black and seems a little thick. The brown head leaves behind brown lacings along the inside of the glass. I can sense bacon in the aroma. I asked Teena, with the much more developed sense of smell what she thought, and, yes, it is bacon. Going back to the OCTB, beechwood smoked malt will have a bacon like aroma.

This is a very strong tasting beer. It has that silky mouth feel that comes from a well-done stout. It starts with tones of chocolate but quickly the smoked sensation comes through. I did not know what to expect and it was surprising. Teena laughed at my reaction.

Although bacon comes through in the aroma, it is not in the taste. Hard to describe the flavour imparted by smoked malt but the best way is is that the beer does have a smokey taste.

This is a very well-crafted beer. My worry about the alcohol taking over the taste of the beer was unfounded. This is a beer which would be nice when coming in from a cold day. It is not a beer which I would have often. For me, the jury is still out on whether I like smoked beers or not. I will say there will be no trouble finishing this one.

One final note on this beer. Originally it was brewed exclusively for export to Sweden but finally can be bought in Iceland. Olvisholt now ships its beer to Denmark, Sweden, Finland and Canada. I would definitely buy another beer from this brewery!