Book Review - Titanic, One Newspaper, Seven Days, and the Truth That Shocked the World

This year is the 100th anniversary of the sinking of the Titanic, the largest ship of its time. It is one of the world's most famous tragedies and this year more books will be coming to print about the story. This one caught my eye as, while we all know the story of that night, this one tells the tale in a different way.
Titanic, One Newspaper, Seven Days, and the Truth That Shocked the World is ... A unique look at the epic tragedy as it played out in the pages of the world's largest newspaper. The Titanic was the greatest ocean linear ever built and the news of its sinking, 5 days into its maiden voyage, shocked the world. Captivated by the tragedy, audiences turned to the trusted London Daily Telegraph hoping to find answers to questions of how the "unsinkable ship" could have ever gone down. Focused entirely on media clippings and reporting from the time of the tragedy, Titanic is a ripped from the headlines account of the sinking of the world's largest ship.

It was this unique focus that made me want to read this book. One note in the forward says that really this was "history being written on the fly" is so true. Incredibly interesting right from the first day when one of the first stories "The Titanic sunk at 2:20 this morning. No lives were lost" appeared.
The mishmash of stories that followed that day were confusing, right from the how the Titanic sunk with great loss of life to "Vessel Sinking - Steamers are towing the Titanic and endeavouring to get her into the shoal water near Cape Race for the purpose of beaching her." The author's notes at the end of each chapter help fill in the gaps and correct some errors in the reporting, to the facts as we know them now.
For instance, the side note on First Class stewardess Mrs J Gould, thought to be lost in the disaster. The story said she had survived two other shipping accidents while working. She on the Suevic which sunk after being cut in two during a collision, and was on the Olympic which was rammed by the ship Hawke. In the footnotes, it said that she survived this one too. 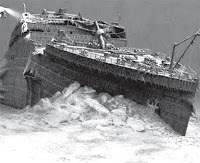 I felt sorry for Joseph Ismay, the executive director of the White Star Line, who was on board the Titanic and escaped in the last lifeboat. A scapegoat was needed and the blame was placed on him. The last chapter from Monday April 22, 1912, told of the grilling he took in front of a congressional hearing. The end notes explained what happened to him after. The book definitely was "history being written on the fly". The heroes, the story of the survivors ordeal, the stern resolve of those left behind, are all told here. It is a book worth reading.
Posted by Swordsman at 10:25

Hi Gord! Welcome aboard the Titanic Chalange! This sounds like an awesome book. I just love reading accounts straight from the source. Wht a mess they made with the early reporting of this, eh?