Beer of the Week - Tennent's Lager 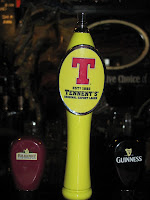 Tonight I met some friends at a Firken Pub and found that they had changed their draught menu. A much better beer menu offered now.

One of the selections, Tennent's Lager, I had not heard of before. I found out that the official launch of it in Canada was held at the Caledonian just last September.

Tennent's is a lager brewed in Scotland, surprising as whenever I think of a beer from the United Kingdom, ales always come to mind.

This lager is not new to the scene either. Wellpark Brewery was founded in 1740 as H&R Tennent where it made stouts and strong ales. In 1885, after taking a tour of Europe and falling in love with Bavarian Lagers, Hugh Tennent came home, took over sole control of the business and started brewing his own lager. 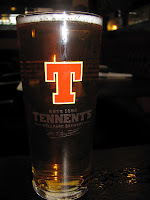 Pretty successfully too. According to the C&C group website, Tennent's lager is Scotland's leading alcohol brand.

The brewery was operated as a family business until 1963 when it was bought out by Charrington United Breweries , which merged with United Caledonian Breweries in 1966. It was during this time to promote Tennent's in a can instead of bottle, they came out with "The Lager Lovelies". Each can had a picture of a woman on the side. They ran 'til 1989 and now collectors apparently will pay a lot of money for them.

The company was bought out by C&C Group and still brews in Wellpark.

But how's the beer?

It came golden with a white head which disappeared quickly. The website says they use maize and malt, which would explain the lack of a sustainable head or any lacings on the glass. The beer starts a little sweet then the hop bitterness comes through. Not an overly bitter beer, but a definite step up from the big brewery beer on this side of the ocean.

It's a decent beer but not a great beer. This would be my "go to" beer at pubs with a limited draught selection.