Scottish Fare at The Caledonian 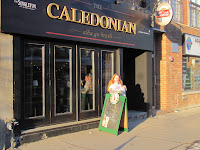 This past week I read an article in the Toronto Star which was a very favorable review of The Caledonian on College by Ossington.

So Teena and I thought as it is in our hood, we should check it out.

Their website says "Come for the food, stay for the drink, return for the friends you've made." Well, I had came for the Scottish beer offered, then the food, and I'll see what friends I/we make.

It is a very warm and welcoming place. Donna, the owner, made a point to come over and introduce herself, and dropped by from time to time to ensure all was well. I noticed that everyone who came through the door had the same treatment. The servers too were all very warm and personable. I felt very settled the whole night. 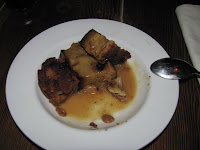 From what I heard, they have an excellent selection of scotch but I was there for Scottish beer and I was not disappointed. There is a great selection of bottled Scotch beer and on draft was Caledonian 80 Shilling Heavy from Scotland and Wee Heavy Scotch Ale made by Amsterdam Brewery in Toronto.

The food was excellent. I started with a Scotch egg. I love Scotch eggs and have few places to have them. This was as good as my Scottish neighbor in Oshawa used to make a lifetime ago. Teena and I both had fish and chips which were great. I loved the lightly battered fish, the chips and the greens which came with it.

We don't usually eat desert but tonight we did. Neither Teena nor I had ever had a deep fried Mars Bar. It 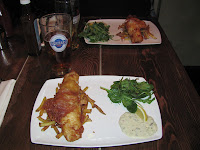 was never my desire to have one but they had bread pudding on the menu which I have not had in many many years and remember fondly. I had to give that a try.

I had a taste of Teena's Mars Bar which was basically molten sugar. I love Mars Bars but do not like them in this form. Who the hell came up with this idea?! I know it is catching on in the city. Why? I have no idea.

After giving my mouth a good rinse with the Wee Heavy Scotch Ale, I dug into my Bread Pudding. It was so fabulous!. I will wander up there again just to have this, it was so good. 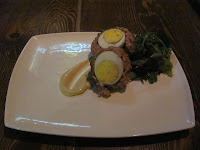 The verdict? Yes, this is a place I will go to again and again. It is warm, friendly, very popular as it was near full all night long.The food is great, the beer is great and the people are great. We were so well looked after all night!

One final thought. As Teena and I left, Donna, the owner, on a very busy night, made sure to call out to tell us to have a good night and thanks for coming.