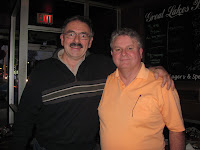 Teena has been doing a lot of research on Ancestry.ca about her family tree and my family tree.

Many of the people she has found on my side have become Facebook friends with me. My cousin, Bob, lives in Etobicoke and thought it would be a good idea to meet up. This evening he and his partner, Frances, met Teena and I at Brydens at Bloor and Jane.

It is interesting to have family living in the same city who I have never met. Bob is actually my first cousin, once removed. I still don't have the "once removed" thing figured out yet. He is my Dad's first cousin.

It was a lot of fun. Bob is a huge fountain of knowledge about my paternal side of the family. He also gave me a copy of my grandfather, Sid's discharge papers from the first World War. 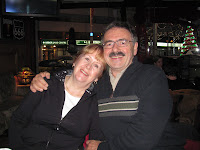 We had a few beers, Bryden's has a great selection of craft beer on draught and in cask. I really enjoyed the Great Lakes Brewery's "The Devil made Me Double Dry Hop it".

We also ate. Teena had hickory medium wings with spicy fries and Cajun mayo, which she enjoyed. I had Nigel Benn's Auntie's Jerk Chicken Wrap with potato salad. The wrap was excellent but the potato salad was bland.

Friday night I was telling Teena of a family member coming to Toronto from Newfoundland way back in the late 60s. He had an accident and punctured his lung. Being family, my dad insisted that he and I go visit even, though we had never met him before. We had to do it as he was family living in a strange city. My dad was a great guy like that.

I told Bob that story. It turns out that that was Bob's brother, Ron!

It was a fun and interesting visit. We'll definitely have to get together again. 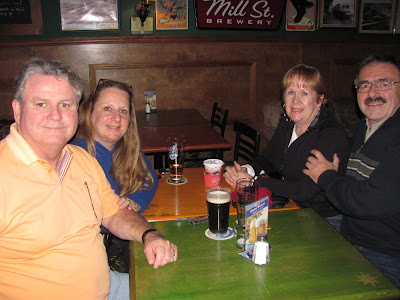