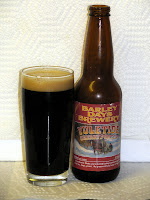 Prince Edward County lies south of Belleville. Ironically my family lives north of Belleville so that's the direction I head when down that way, so have never visited. The county has become very well known for being the newest wine region in Ontario but there also is a craft brewery there, Barley Days Brewery.

The brewery is aptly named, as I was just reading last week in "Art and Mystery of Brewing in Ontario" about the region's "Barley Days" which ran from 1860-1890. There were there several breweries in the area which sat on a well-protected harbour, as the U.S. was very thirsty, and their industry concentrated on the civil war and not brewing. So to Prince Edward County they came for beer to drink and barley for food stuffs. When the U.S. government decided to protect their own farmers by placing a huge tariff on barley, prices in the region crashed overnight and the Barley Days were done.

Barley Days Brewery was opened in August 2007 by Christopher and Norah Rogers. For the first year, according to a Queens School of Business case study, "employed an ‘academic’ brewmaster who cared little about the quality and consistency of the product that he was brewing." They then hired an experienced head brewer from Germany who made flavourful and consistent tasting beers.

In 2009, they hired Alex Nichols who "has a Bachelors of Science in Microbiology from University of Guelph and a Master of Science in Brewing and Distilling from Heriot-Watt University in Edinburgh, Scotland."

The same people who own the brewery also own a restaurant and inn close by called the Waring House. Bet I know who's brews they have on tap!

And the Yuletide Cherry Porter?

I admit I am a little nervous. I like cherries but find many times when they are put in something like yogurt, it makes it taste like cough syrup. Hopefully that is not the case here. Barley Days uses fresh cherries from the region and bottles the porter unfiltered.

It pours black in colour with no head. No lacings on the side either. I will have to clean another glass with a fresh pour.

OK, the beer in the picture up top is from the second pour. I definitely did not rinse the glass properly for the first one. . My fault, not the brewers. I write about this as it is a good reminder to myself to always ensure I do this right. 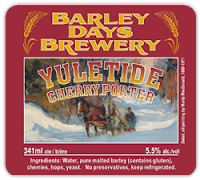 The beer has a nice brownish head and, yes, there is a sheet of lacing down the inside of the glass. There is a definite coffee presence in this which tails off quickly in the end. It has a smooth stout-like mouthfeel to it. I do not detect cherry in this but there is something, another taste that comes through at the end. It might be what removes the porter harshness at the end.

This is a good beer but not a great beer. Good enough that I would like to try some other offerings they have, maybe even on tap in the area.

I'm glad I tried this particular one but would not buy it again.