The Duke of Kent 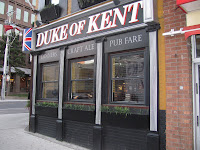 Tonight I was at Yonge and Eglinton and saw what looked like a cute little pub on the east side of Yonge, a block north of Eglinton called the Duke of Kent. I peaked inside. It looked good with lots of taps, so in the door I went.

For a Monday night, there was a fair crowd. It seemed many were regulars and I could see why. The bartender was great and knew most by name. I also noticed that the servers also seemed to know everyone too. When I came in, I was wearing a name tag that I had forgotten to take off from a meeting and after a minute or two at the bar took it off and disposed of it. Later, the bartender still remembered my name from it. That's what I call a welcoming pub. 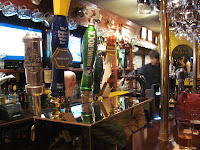 The bar is "J" shaped and the front of the pub has a few booths where the back has tables. There are mostly English brews on tap, some Rickards and a couple of craft beers, Steam Whistle and Mad Tom. I went for the Mad Tom.

If in the area, I would definitely stop back for a couple of pints and something to eat. I loved the atmosphere. It is the type of place that is sadly missing from our neighborhood. It's worth checking out.
Posted by Swordsman at 18:44