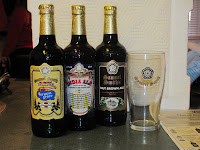 I'm not a big fan of Christmas, but one thing about it that I do like is that many breweries world wide put out gift packs. I am a big fan of English ales and this week picked myself up a Samuel Smith gift pack. It comes with 3 beers, a Nut Brown ale, the Celebrated Oatmeal Stout and their India Ale. It also has a Samuel Smith ale glass. Not bad for $17.50

I have written about this brewery before when I tasted their Imperial Stout. In the article I described how this is one of the few breweries to use the Yorkshire Square system in it's process.

Today is about tasting though.

The first one I am trying is the Nut Brown Ale.

Their website describes it as "Brewed with well water (the original well at the Old Brewery, sunk in 1758, is still in use, with the hard well water being drawn from 85 feet underground); best barley malt, yeast and aromatic hops; fermented in ‘stone Yorkshire squares’ to create a relatively dry ale with rich nutty colour and palate of beech nuts, almonds and walnuts."

Lets give it a try.

This does pour brown in colour with a brownish head and has a malty aroma. No adjuncts in this as lots of nice lacings line the glass. this beer has lots of taste! It has a creamy mouth feel and yes, there is a slight nuttiness to the flavour. It starts a sweetness, then comes that slight nutty taste, and ends with a bitter finish. Well done but just not my style of ale.

Next up is the Oatmeal Stout which the brewer describes as "an almost opaque, wonderfully silky and smooth textured ale with a complex medium dry palate and bittersweet finish"

I checked and yes, there is oatmeal in this.

On the bottle the brewery claims "Celebrated Oatmeal Stout is a style benchmark revived by Samuel Smith and the inspiration for hundreds of commercial oatmeal stouts" Quit the claim.I I love oatmeal stouts and am anxious to give this a try.

The beer pours very black with a creamy brown head. I find very little aroma to this. This is a very creamy stout which rivals any other stout on the market. It is quite smooth with a slight coffee taste to it. It finishes with a slight bitterness, not a hop bitterness but one which would come from the roasted malt.

Lastly it's off to what I think should be the star of the show, the India Ale!

I am a big hop fan and it's the big hop bitterness that defines this style. Described on the website as using the "best malted barley and a generous amount of choicest aroma hops to create an exceptionally full-flavoured complex ale with an abundance of maltiness and fruity hop character."

The beer has a coppery colour with a off white head. There is some floral hops in the aroma. The beer starts slow with a slight hop bitterness but finishes with a more pronounced one. With my first sip, I thought this IPA was quite toned down. That opinion changed on the second sip as I felt the full flavour. A nice hoppy beer not overpowering in bitterness but nicely balanced. My favorite of the lot, which is what I expected.

Christmas gift packs are a great way to try some beers not usually available in Canada. This one is certainly worthwhile!
Posted by Swordsman at 16:14