Beer of the Week - Efes Pilsener 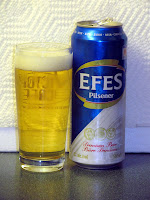 This week I am trying my first beer from Turkey, Efes Pilsener made by Anadolu Efes Biracililc Ve Malt.

Anadolu Efes started brewing in 1969 in two different breweries with Efes Pilsen being its flagship brand. Today it is still its number one brand and is shipped to over 60 countries. It is the eighth most popular European brand by sales volume. Its combined beer operation makes it the fifth largest European brewer and ranked 12th in the world beer market.

Many countries have their own stock exchanges and Turkey is no different. Anadolu Efes is listed on the Istanbul Stock Exchange with ticker code AEFES.IS.

In 1976, Anadolu Efes put a team into the Turkish Premier Basketball League called the Efes Pilsen Sports Club. It has done quite well having won 13 championships. In 2004, the company created Efes Basketball Schools which are free for kids. So far over 3000 childre

n have gone through the program who's goal is "contributing towards raising a wholesome generation that is useful to society and able to set its goals."

I like it when large corporations give back, especially to the youth of their country.

I am a firm believer in malt in a beer with no adjuncts and am a little nervous when the company proudly prints "The flagship product, Efes Pilsen (called "Efes Pilsener" in English) gets its unique taste from rice added into the ingredients at brewing stage". One of the problems with North American big breweries is their heavy use of rice in their beer.

Before giving this a try, I have to remind myself not to prejudge. Keep an open mind, Gord!

The beer pours yellow i

n colour with a white head which dissipates quickly. I do find lacings along the inside of the glass but they too disappear rapidly.

The beer starts a little sweet and finishes a little sour. All in all, there is not a lot of taste to this beer. I write this with no previous prejudice that I mentioned earlier but it does taste like an ordinary everyday North American big brewery beer. In a blind taste test, I doubt anyone would know the difference.

Time to finish this one off and go and have a decent beer.

Labels: Beer of the week, Turkey