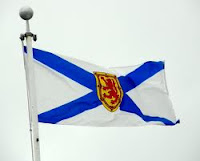 I have been to Halifax a couple of times before but this is the first time I have ventured away from the province's capital.

In Halifax, I have always eaten pub grub, mostly wings and such, but for this trip I decided to shake things up a little.

I like shrimp, am not a fan of fish unless it is battered and deep fried and not a fan of lobster. For this trip, though, I wanted to try some of the fresh seafood that Cape Breton has to offer.

When I arrived on Wednesday, I did not get a chance to put the plan into action as we grabbed a quick bite at the Burger King at the airport. Then we were off to Antigonish where we ate at The Wheel, a place Teena used to frequent back in her university days.

On Thursday, we drove to Sydney and that night ate at Governor's Pub & Eatery . Instead of going for meat, I went for a Nova Scotian fish dish, the Haddock a la Maison (pan-fried haddock lightly breaded, topped with two scallops, two shrimp and a drizzle hollandaise sauce). It was very good. I usually find scallops to be tasteless but these were good. The haddock was not at all fishy. It was dish I quite enjoyed. 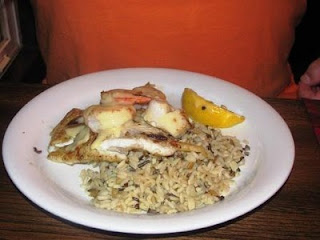 On Friday, we took a trip to the Fortress of Louisbourg and when we got back met up with Teena's sister, Sarah, and her husband, Joey, at The Crown & Moose Pub in our hotel. As it was a pub, I wanted pub grub so went with the wings. A favorite pub snack in Nova Scotia is deep fried pepperoni so I ordered it along with my wings. The pepperoni comes with a honey mustard sauce. Teena thought it was cut too thin and was dried out. I enjoyed it like that! 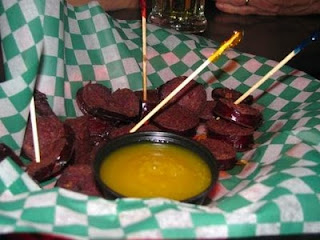 Saturday we drove around the Cabot Trail and stopped for lunch at the Coastal Waters Restaurant & Pub in Ingonish. It was a good choice as not only was it a nice fresh clean place to eat but also had the Australian Rules Football Championship game on the TV. They said the haddock in the Fish and Chips were fresh so I went with that. There were 2 generous portions of haddock and a mound of chips. It was delicious and I could not eat it all. The fish was tasty and again not fishy in smell or taste. 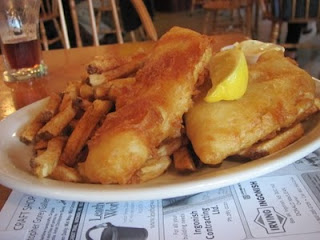 That night we ate at the pub at the Glenora Inn and Distillery with Sarah and Joey. Usually I do not order an appetizer or soup with a meal but saw Maritime Seafood Chowder on the menu (leeks sautéed in Glen Breton whisky butter top off their creamy chowder with fresh haddock, scallops and salmon). I had to give it a try. I figured it might be quite fishy having salmon and haddock in it. It was very good! I would have that again! 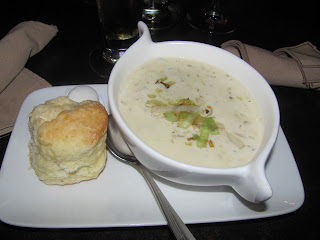 Today was the drive to the airport to catch our flight home. Since Wednesday when we left the airport, we saw signs outside of every town advertising MacDonald's McLobster sandwich. I know what you're thinking but come on! Only available in New England and Atlantic Canada, it is unique enough that I had to give it a try.

Turns out that the lobster is quite tasteless. Obviously not caught that morning!

It is served on a french roll with lettuce and "McLobster sauce". It's not often that lettuce can overpower the taste of the rest of the sandwich. Nonetheless, I did have one and the anticipation of having one was fun. A bus full of tourists came in after us and many of them ordered up the McLobster sandwich too. It's unique, popular and tasteless. I'm glad I tried it once. 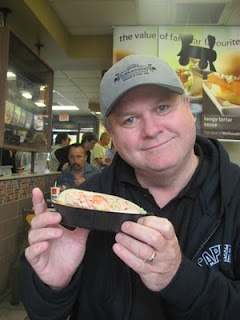 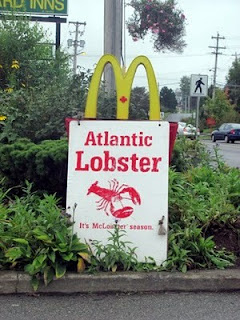 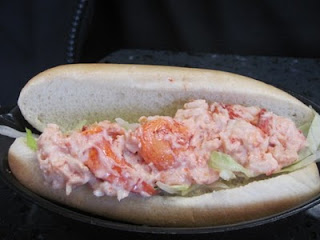 I enjoyed all the food I had while in Nova Scotia and am glad I decided to try something that is fresh and local. Next time I am in Nova Scotia, I will again endeavour to try some local fare. I will not have another McLobster, though.
Posted by Swordsman at 20:33