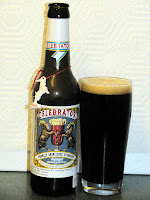 Bocks and Doppelbocks used to be the beer of Easter. Brewed as a liquid bread, it was made to sustain monks through Lent which runs from Ash Wednesday through to Good Friday, a period of about 40 days. During this time, monks fast and their nutrition comes mainly from beer.

This is where Doppelbocks come in. They are "typically even stronger and contain enough malty goodness that they’ve been considered a meal in a glass for centuries. Generally they have a very full-bodied flavor and are darker than their little Bock brothers and sisters and a higher level of alcohol too. They range in color from dark amber to nearly black, and dark versions often have slight chocolate or roasted characters."

Bocks and Dopplebocks are now brewed for the Fall/Christmas season as well as Lent and Easter.

Now that the temperatures are getting cooler, I picked up a couple of bottles of Ayinger Breweries Celebrator Doppelbock to try.

Ayinger Brewery was founded in 1878 by Johann Liebhard in the Bavarian village of Aying. It has remained an independent family owned brewery ever since although for the past four generations the family name has become Inselkammer. I do not know whether this is due to marriage or sale of the company. 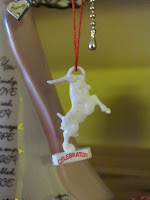 Two goats are on the label of the Celebrator Doppelbock and a goat ornament for the Christmas tree hangs around the neck of the bottle.

Many brewers of Bock beer use the goat as Bock was originally created in town of Einbeck. The style of beer was called Einbeck which most in the region pronounced as "ein Bock" which in German means "billy goat". This is a Doppelbock so two billy goats adorn the label.

It pours black in the glass but I see red in it when I hold it up to the light. I can smell the roasted malt and do expect this to be a very malty beer. It has a good brownish head and lacin 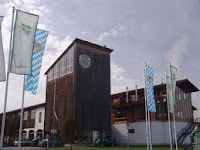 gs remain on the inside of the glass when sipped.

This is a full tasting beer and very malty as expected. It does not taste so much as toasted malt as in a stout but more of a burned malt taste. There was a slight hop bitterness in the long finish.

Overall I was not crazy about this beer. The burnt taste put me off. It was a beer I am glad I tried and I do have my two billy goat decorations hanging in the wall unit, but it is not a beer which I would have again.