The Tod Ainslie War of 1812 Exhibit at Toronto Image Works The War of 1812 has long been a subject of great interest of mine.

When I read an article in the Toronto Star about an exhibit that Tod Ainslie had at Toronto Image Works on Spadina, a few steps north of King, about an exhibit of pictures depicting that period of time, I knew I had to make a visit.

Tod Ainslie is a pinhole camera specialist, with a deep interest in the War of 1812. The very first cameras invented were pinhole cameras. What he did was develop a few different pinho 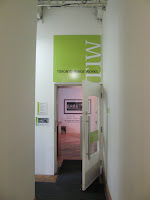 le cameras to take black and white shots of different places a soldier in that war might have visited. The result is like looking into the past at that period of time.

Tod Ainslie said of this collection ...

"I have chosen as my subject the historic sites that were seen through the eyes of a soldier who travelled through the eastern half of the North American continent during the War of 1812. It was my intent to capture what he would have actually seen and experienced in his tour of duty, and what he would have taken shelter in during his time in the New World. By using the specialized pinhole cameras that I built to fit each site's unique setting, some of the verisimilitude has been achieved. I used dodging and cropping for esthetic purposes but not depart from the real image of what was there. However, some present day structures wer 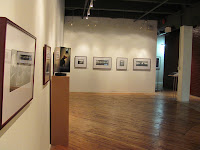 e allowed to creep into the periphery of the sites, to illustrate how the past is not only incorporated into the present but it often sits in juxtaposition to it. As I worked with these primitive cameras and saw the images they produced, I felt a strong sense of the period's aura, a sense of the places themselves and an empathy for the people whose energies created them."

Most were single shots and a few others were panoramic shots. Ainslie developed a camera with six pinholes, with film lined up behind each of them to get the panoramic effect.

My two favorites? One was a shot looking from east to west into the rear entrance of Fort York and the other is a shot of the oldest surviving building in Fort George at Niagara on the Lake, the magazine built in 1795. Both are eeri 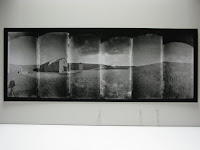 e and really put me back into the era, perhaps as I have seen both views from today's perspective.

The pictures were smaller than expected but very captivating. I am very glad that I took the time to pay a visit to this exhibit. I have read much about this war and visited many battle sites and yes, I felt his display has given me a better feel for the time.
Posted by Swordsman at 16:20