Beer of the Week - The Celt Experience Bronze Ale

Although I have not confirmed it, having a last name of Jones means that most likely I am of Welsh decent. I have had the pleasure of fencing in two Commonwealth Veteran Championships and both times members of the Welsh team would approach me and tell me I had to change the name of the country on my back of my fencing jacket to Wales.

"I'm a Canuck, though," I would protest. "Not with a name like Jones. You're Welsh!" they would counter.

In all my years, though, I had never had a beer from Wales. Well, that is 'til today. This week I was happy to find a Welsh beer sitting on the shelf of my local LCBO, the Celt Experience Bronze Ale.

It seems that Wales has quite a few breweries but Newmans Brewery is a small craft brewery which brews its beer in small batches. Located in Caerphilly in southern Wales that features the ruins of a roman fort and one of the largest medieval fortresses in Britain, Caerphilly Ca 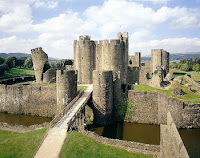 stle was built in 1268 and famous for its 'leaning tower'. Newmans Brewery is the first brewery in over 100 years to operate in what seems to be a beautiful little town.

Tom Newman was a chartered water engineer in Cardiff and in 2001 started dreaming and planning on opening his own brewery and creating beers based on historic Celtic brewing methods.

He started in his fathers garage in 2003 with a small 5 barrel brewery. He won some awards for his beers and in 2005 bought Smiles brewery in Bristol which gave him a a 20 barrel brewery. It was in 2007 that he decided to move to the 'land of his father' Teifion Newm

an in Caerphilly. He built a larger 45 barrel brewery which could brew 1,000 pints a day and started brewing beer under the The Celt Experience
banner, along with the other beers he had created over the years.

This beer is named after the Bronze Age Celts. Recent discoveries in Bavaria have shown Celtic tribes were brewing as far back as 800 BC. The name Bracis-Curmi (malted beer) traces back to the ancient Celtic language or proto-celtic, an age where Celts were some of the first beer producers in Europe.

The beer does pour bronze in colour with a white head. As the head dissipates and I sip it, lots of lacings remain on the inside of the glass. Even though it has only 4.5% APV (4.3% a 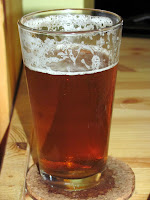 ccording to the LCBO site), this beer does not lack in taste. It starts off a little light but then there is a wonderful hop finish, that I can only describe as a 'soft' hop finish if that makes any sense. In any case, I loved the finish and really love this beer.

How much? Sundays are great days to have lighter beers and this one is a perfect Sunday beer. It is good for any night of the week but as long as the LCBO stocks this, I will be buying it!

I would love one day to have one on tap while sitting in a pub in Cardiff or Caerphilly. One day!

Labels: Beer of the week, Wales