Play - "The Grapes of Wrath" 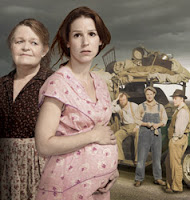 Today Teena and I went to Stratford to see The Grapes of Wrath.

The play is based on the Pulitzer winning novel by John Steinbeck. I had never read the book nor have I seen the movie so was going in with no preconceived ideas or impressions.

Having survived the drought of the 1930s Dust Bowl only to see their home repossessed by the bank, the Joad family embark on a harrowing trek from Oklahoma to California, intending to begin anew as migrant farm workers. Their arrival in this “promised land,” however, brings its own test of the human spirit.

Inspired by the literary classic, this Tony Award-winning drama tells a timeless story of endurance and hope."

This is theater at its best! The play had drama, hope, despair, humour and heartbreak which kept me totally caught up in the characters and their story.

I thought Tom McCamus was outstanding as the ex-reverend Jim Casy. Teena did not care for Janet Wright's acting in her role as Ma. I was unsure whether her character was supposed to be always looking off into space when speaking instead of looking at the person she was talking to or if that was just the way she chose to play the role. 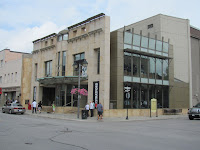 I found it interesting too to see Chilina Kennedy in such a small role as we are used to see her in starring roles such as Evita and West Side Story.

The use of the stage as the family traveled across America was excellent with great special effects such as rain and the characters playing in a river. They play also uses balladeers to move the story along with one of them quoting some lines form the original book.

Grapes of Wrath is definitely worth the trip to Stratford and is in my top 5 plays of all time.
Posted by Swordsman at 16:50