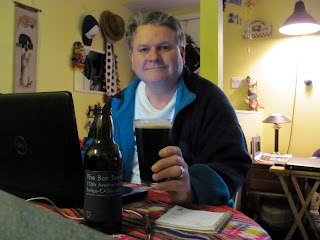 OK, I am going to admit it right now ... I am prepared to be very prejudice towards this beer.

Normally I research a beer and brewery, then hope the beer I am going to try is a one which I'll love or at least like. Today I am prepared to love this beer.

Although Mike Lackey, the brewer at Great Lakes, did most of the work, my imprint is one this beer. I helped with some of the grinding of the malt and in adding the hops to the brew. Yes, my contribution was small yet it was there. 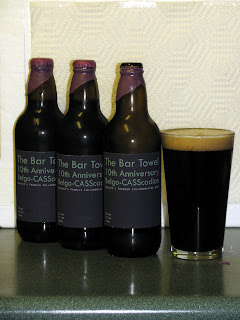 The beer did OK too. At the 2011 Golden Tap Awards, 24 Ontario craft beers were on tap and our Bar Towel 10th Anniversary Belgo-CASScadian Ale was voted the Golden Tap Award for Best Beer of the Festival.

Only 100 litres were brewed. Each person who was at the brew day received a free bottle and the right to buy 2 more. Any extra would be on sale at the brewery. I was first there once bottled and came home with my three.

The beer contains 4 kinds of malt plus citra, Columbus, Amarillo, sorachi ace and centennial hops. I fell in love with citra hops that afternoon.

I like the fancy wax on the bottle. If you are wondering if the wax would interfere with drinking from the bottle, most beer geeks will tell you that beer should be drank from a glass.

It pours black with a brown head which takes its time to dissipate leaving behind lots of beautiful lacings.

This is a very very nice combination of a porter and an hoppy ale. I have heard the term Black IPA a lot lately and am unsure if this would be considered one. To me, this is a more of a hoppy porter. 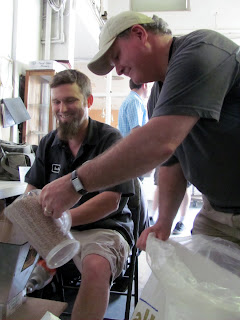 Even if I did not participate in the brewing, this is an excellent tasting beer, a beer that I would buy again. If there are any left over for sale, I will be bringing more home.

This is an excellent beer to honour someone who himself did something excellent for the craft beer world and its fans. I enjoy reading and commenting on the Bar Towel Forums. Thanks again, Cass, for putting up such a great website to visit and be involved with.

It makes it that much tastier when you've made it!