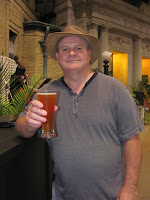 The CNE had a Craft Beer Garden which, of course, was a must-visit for Teena and I.

It was here that the term Canadian National was put into a beer as well as the Exhibition.

"Great Weiss North is an All-Canadian brew in every sense of the word. Made with an ingredient from every province and territory in the country, it is a unique beer that was designed to showcase all that Canada has to offer. The idea was the brainchild of Sawdust City Brewing Co. Brew Master Sam Corbeil, the beer itself was designed and made by Jon Downing, Brew Master and professor at the Niagara College and a team of his first year students from the College’s Brew Master and Brewery Operations Management course." 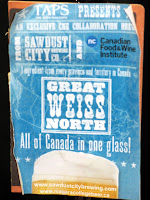 The beer contains the following:

The beer is golden amber in colour and slightly cloudy. I could smell banana from the yeast as is usual with a wheat beer and some other things I could not put my finger on.

The first glass that I had was an adventure. The wheat beer taste came through clearly and I could taste the hint of maple syrup. The first one was OK. I think I was too busy trying to pick out tastes within the beer to really experience the beer. 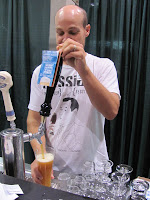 It was when I had the second glass and settled back to just sip and enjoy that I truly discovered what a nice beer this is. It starts as a wheat beer, evolving into some other weird wonderful flavours and finishes with a subtle sourness.

It is a very nice beer which I am very glad I had the opportunity to try. I also had a few minutes to chat with Brew Master Sam Corbeil (pictured to the right pouring my beer), who is a real nice guy. I see good things ahead for Sawdust City Brewing when it opens as obviously Sam has great imagination when it comes to beer. I look forward to trying their first beer when the brewery opens in 2012.

For a great story of the brewing of Great Weiss North complete with pictures, click here. It's a fun read.
Posted by Swordsman at 17:14

My wine was yummy :)