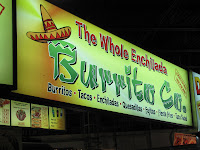 Today we were at The Ex and had burritos at The Whole Enchilada.

I tried to find where they might be located in Toronto but seems The Whole Enchilada is just located only in the Food Pavilion at the CNE. There is a chain in the southern U.S., but could find no other places in Toronto.

Being a food stand at a national fair means the food 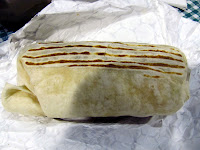 is more expensive. Teena paid $8 for a small, which was smaller than the usual small, and I paid just over $10 for a large.

There was a good variety of fillings. I had a chicken burrito with beans and rice as the main fillings. It was a decent size and they did not skimp on any of the fillings. The burrito sauce had a little kick but at no time 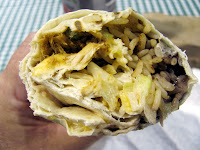 was I asked if I wanted a hot sauce on it.

It was grilled after in a press and I will say it tasted pretty good. Overall if I had to score and and, no I have not yet developed a scoring system (I should), I would give it a 6.5 out of 10. If they had a store in Toronto, I would be willing to give them another try.
Posted by Swordsman at 14:55

It was tasty ... I wish mine was bigger.