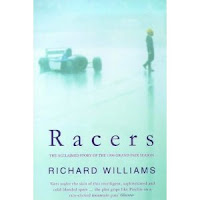 Martin at work is a big Formula One fan and, knowing I am a race fan, lent me "Racers" to read.
"The 1996 Grand Prix season was a battle between three highly different personalities: Damon Hill, Michael Schumacher and Jacques Villeneuve. This book gives an account of the season as it unfolded in episodes of increasing tension and unexpected developments. On the surface formula one is about technology - the winner is the boy with the best toy. In fact it's all about character and the conflict between men of such different temperaments. This book examines the media of the sport and the characters within it as well as the role of commerce in sport, the role of sport in global entertainment and the role of women in such an environment."
This was a very interesting read. Richard Williams followed the F1 season around the world in 1996 and wrote this book immediately after the season. This is not a book about what happens on the track but everything that happens off it. It gives great backgrounds on the 3 main drivers involved and explores the inner workings of a race team, plus the politics of Formula One in the worlds most famous racing series. I found the authors exploration of the 3 main drivers personalities in the series that year, Damon Hill, Michael Schumacher and Jacques Villeneuve, quite involved. Although the book is hard to get now, for any race fan it would be an enjoyable read. Thanks, Martin!
Posted by Swordsman at 11:50

Martin also loaned me this book and after reading the preface you highlighted in your post Gord, I was instantly hooked.

Long live Frank Williams and the essence of men and machines racing at their absolute pinnacle.

Here is the actual books preface I had mentioned:

This book is about the men who drive racing cars and about their place in our lives. That place has grown larger in the recent years, thanks to television, but it does not mean the men themselves are much different from their predecessors in their motives, desires or reactions. Sport is still about winning or losing, the refinement or technique and the pleasure of taking part; the difference, in the television age, is that the spectator is allowed a closer view of the player's character. Sometimes transparent, sometimes obscured by the layers of deception, that character can be strengthened or distorted by the exaggerated and incessant attention. The simple compensation for being subjected to the unnatural process is the money. The forfeit varies from person to person. Here, over the course of a season, a three-way rivalry plays itself out with the unusual intensity. This is not a detailed reconstruction of a season's races; the relevant statistics may be found elsewhere. But it is the story of three men, their effect on each other, their effect on us, and our effect on them.