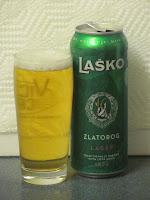 I must admit that my geography skills have never been very good. I had a hard time with the subject in school and now that Russia has split off into many smaller countries, I am even more lost.

This is my excuse for never having heard of Slovenia, that is, until I hit the LCBO and found a beer from there, Lasko Zlatorog Lager.

You see, drinking beer can also be educational!

The Republic of Slovenia borders onto a few countries ... Italy to the west, Croatia to the south and east, Hungary to the northeast, and Austria to the north, and also has a small portion of coastline along the Adriatic Sea. It has a small population of just over 2 million people.

There are two breweries in the country, Union Brewery and Lasko. It seems that Union beer is popular in the capital city of Ljubljana and Lasko beer is popular everywhere else. Lasko holds a 60% share of the Slovenian market. 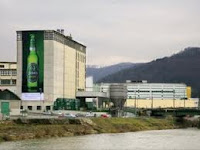 Since Franz Geyer opened the brewery in 1825, the brewery has gone through a half dozen owners. The story I enjoyed most came from the Lasko Pivo, LLC website. Julij Larisch, "suffered an accident and lost his sense of taste and so could not supervise the quality of the beer himself, which caused the bankrupcy of the brewery. Or perhaps things were simpler and the young man wanted to modernize the brewery because of keen competition and got swallowed by the investment."

Can't imagine not having a sense of taste!

Today Lasko seems to be owned by an Inn-Keeper group, which brought back the brand in 1938, after the original brewery was bought out by Union brewery. The brewery was shut down for two years when in 1944, allied bombs meant for a nearby bridge also destroyed the brewery. A new brewery was built and now Lakso dominates the Slovenian marketplace.

So, what about the beer?

The beer is not golden but pours more of a light straw colour with a nice white head. The head did disappear rather quickly leaving very few patchy lacings on the inside of the glass. The beer is so clear it is quite easy to see the lettering on the back of the glass. Floral hop notes are in the aroma.

The beer has slight hop bite when sipped, which stays for a moment, before disappearing from the mouth. It's not an outstanding beer but an OK beer. A nice pilsner style beer, one which would go down nice on a hot afternoon.

In fact, this is a hot Toronto summer afternoon so I'm heading outside to enjoy the next one.

Labels: Beer of the week, Slovenia