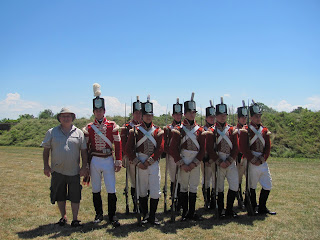 Today Teena and I headed over to Fort George for a quick look around before heading to do a wine tour. Glad we didn't book the tour before hand as we spent three hours at the Fort.

Teena enjoys history and the history of Canada. The War of 1812 is one of my favorite subjects to study and research. This was certainly our place to spend a great afternoon. 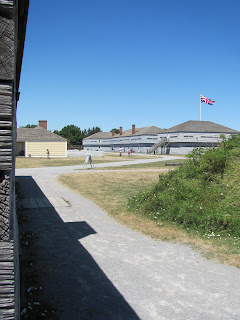 Fort George does a great job to teach about that period in time. From the burning of civilians homes in Niagara on the Lake (then Newark) during a snowstorm in December 1813, to the weapons of the era, cooking and barrack life were all excellently done. Teena and I spent half an hour talking with the fort cook! I was in war of 1812 heaven. I learned and saw so much today and thank you, Teena, for being so interested and being involved for the whole time.

If I had one disappointment, there was a 9 volume series of books of all the letters and correspondence from both sides of the war for all 3 campaigns in the Niagara region. Each book had an individual price and I wanted volume 4 which was the American campaign of 1812, the attack on Queenston Heights and General Brock's defence and death on the field of battle. I went up to buy it ($60) and was told the only sold it buy the set for $400. A deal really if you look at all the volumes individually but I was not prepared to fork out that much at once. I would have like to have been able to, though. The search on the 'Net for this volume begins.

What a fabulous afternoon and, yes, there are pictures involved. Thanks, Teena, for being so wonderful and involved. She has a great blog post about it here. 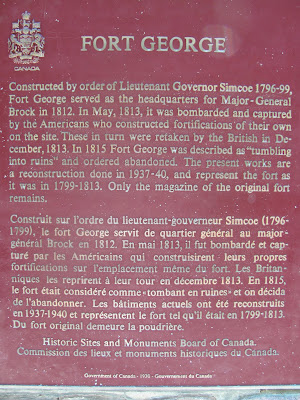 Brock's bastion and original headstone. After General Issac Brock was killed during the battle of Queenston Heights in October of 1812, he was interred here until 1824, That year his remains were reburied at the first monument was built for him at Queenston Heights. 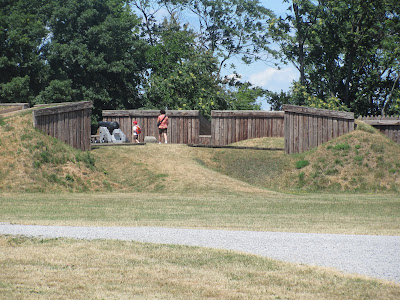 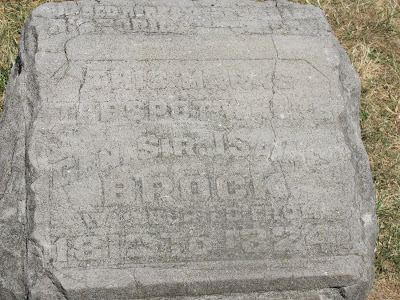 We did not get her name but she is in college studying history and enjoying living it. We spent a half hour talking with her about the cooking tools of that time. 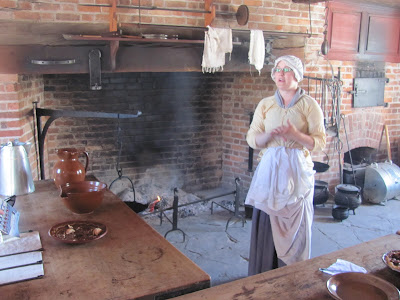 This cannon was pointed at Fort Niagara on the U.S. side. I am directing fire to take it down! 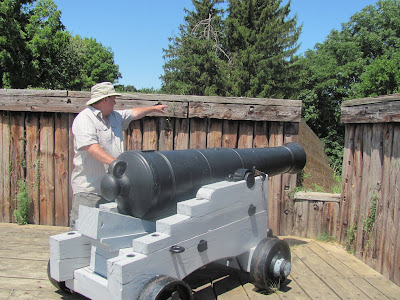 Cannon protecting the fort. One day I hope to fire one. 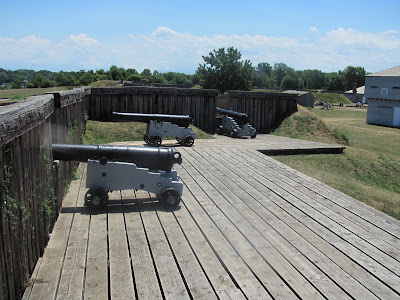 Re-enactors marching in for the musket demonstration. 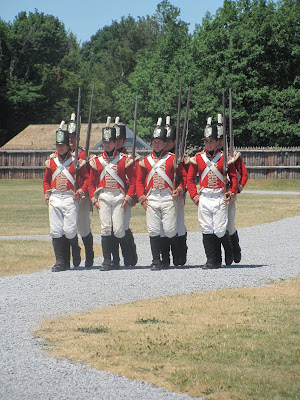 This Sergeant gave a great talk on the loading firing and reloading of a musket during battle. Properly trained troops could fire a round every 15 seconds, amazing for all they had to do for each shot. 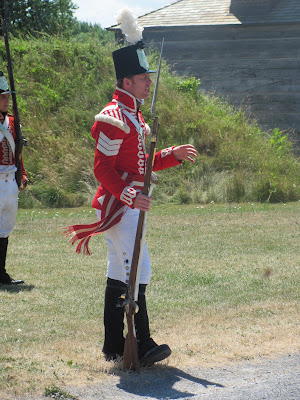 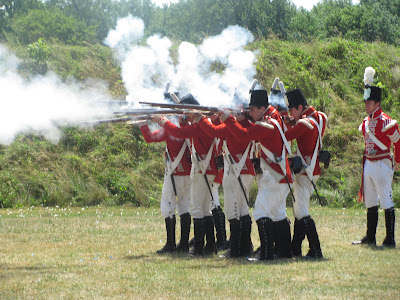 The Fort's magazine built in 1795 is the only original remaining building form the original fort. 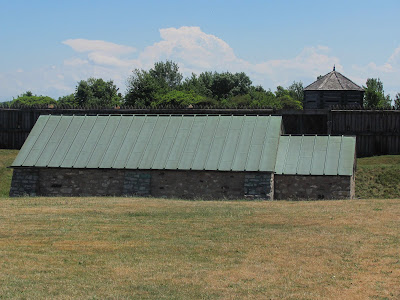 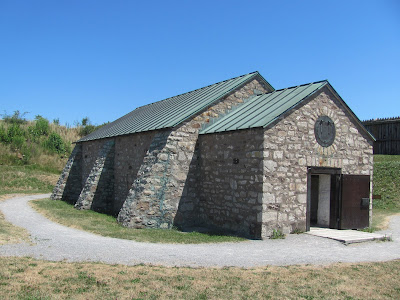 The gaol (spelling from the period). Teena and I acted up! 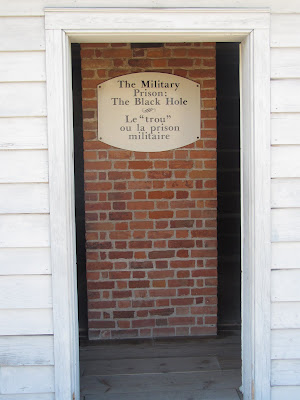 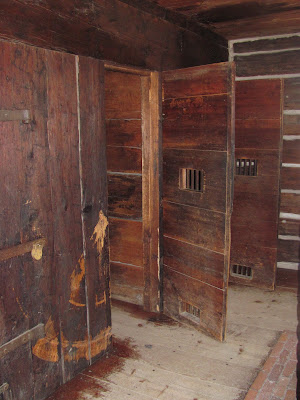 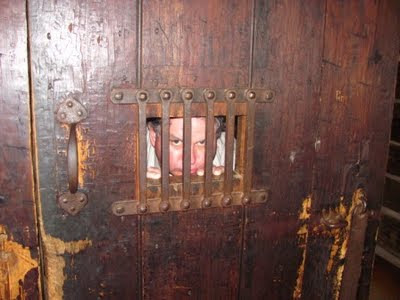 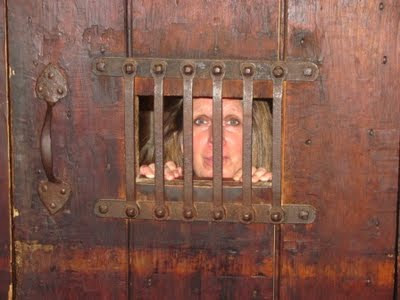 Living quarters for the troops. The gun rack was close, ready to go. 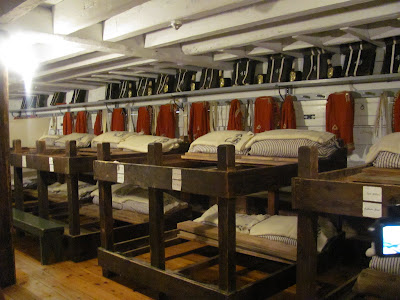 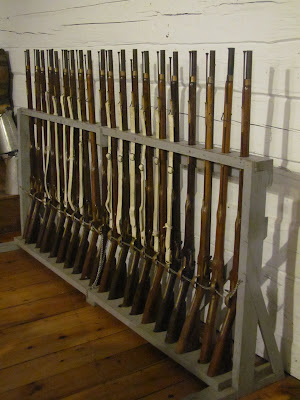 The view of the fort from the outer bastion upper musket slots. 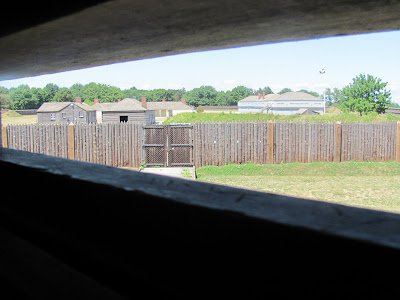 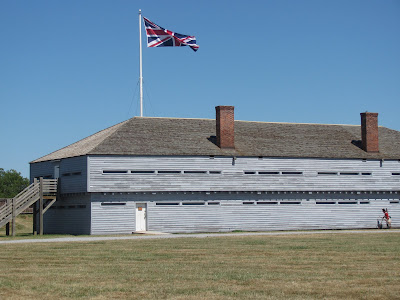