An Afternoon at a Taste of Little Italy 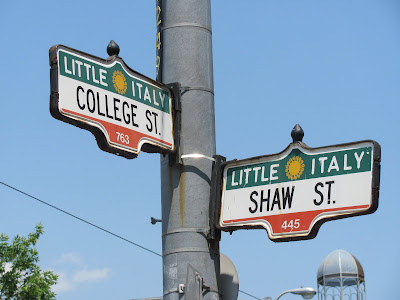 This afternoon Teena and I did our yearly trek up to the Taste of Little Italy.

College Street is closed from Shaw to Bathurst and all the pubs, bars and restaurants expand their patios into the street. It is our favorite street festival. We found a Taste of the Danforth too crowded and boring and the Corso Italia festival on St Clair way too boring.

There are plenty of people here of all ages and backgrounds. It is a fun vibe. 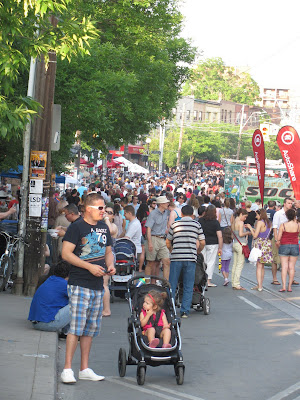 Every corner has a band and the bands are coordinated so one plays on one corner while the one on the next corner takes a break. No overlap and the variety of music is great. I particularly enjoyed watching this older couple dance. They obviously have danced together many times in the past. 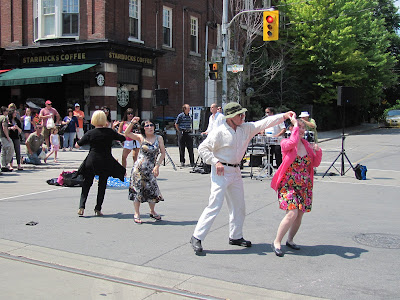 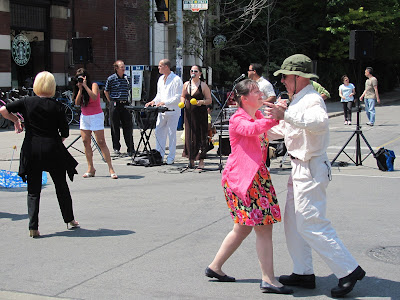 The food vendors had some great stuff cooking. 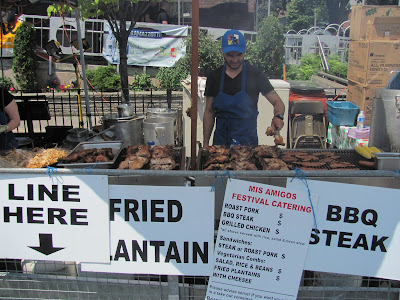 When it was time to eat, we went to Duffs Wings and were seated by a hostess on the patio ... and there we sat for 10 minutes totally ignored by three servers. Not even an acknowledgement from them that we were there. Nothing. So we left! Definitely did not deserve our business.

So instead we hit Southside Louie's where we were well looked after by our server and the food was very good. An interesting thing happened when I went downstairs to the bathroom. Interesting and semi-violent. 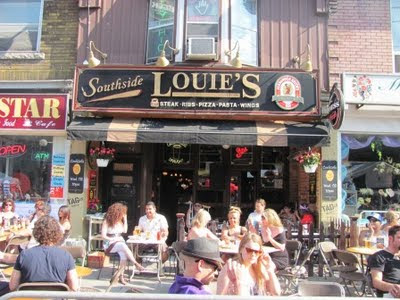 I followed a fellow into the washroom, which was a little small. There was two urinals to the left and on the right side was the toilet, not in a stall but in a separate room with a door that went up about 3/4 ways. He went into the toilet and I went to the urinal.

In walked a third fellow who went over to the toilet door, peaked over the top and said, "Having a little poo are we?" I thought they were friends and thought wouldn't want any friend of mine doing that.

Turned out they didn't know each other.

Turned out the guy in the toilet wasn't happy about it either.

I heard a belt rattle then the door flew open and the guy from the toilet asked the intruder in a loud angry voice what the hell he thought he was doing.

"I was checking to see if the toilet was in use," answered the dimwit.

I was done doing what I came into do and simply wanted to wash my hands but this was all taking place in a small washroom in front of the sinks. I would have to wait.

"I don't feel you need to be be so angry. I simply wanted to know if someone was in there?"

I couldn't believe this guy was for real. Obviously neither could the first guy.

"I should haul your ass outside and kick your ass."

"I don't fight, Sir. I prefer to settle things with words."

What occurred right after he said that did not surprise me at all. The angry guy slammed his open hand into the dimwit's chest, knocking him over my sink. I commend the guy for using an open hand instead of punching him. Now I have dimwit laying over my sink with shock and surprise on his face. It's going to take forever to wash my hands!

The angry guy stormed out saying he was going to get dimwit tossed from the pub. Dimwit looked at him in disbelief, saying, " Your going to have me tossed?"

"Damn right! You watch", and off he stormed.

Dimwit after a moment finally got off my sink and I stepped in quickly to wash my hands.

"Did you see that? There was no need for that!" dimwit said. I said nothing, dried my hands and left.

Funny that dimwit really had no idea he did no wrong. I commend angry guy on his restraint and giving him a little lesson as to why you should not infringe on a person's privacy.

The afternoon was a lot of fun again as it always is. It is tradition that Teena and I stop in for a Shiatsu massage here. This year we did 30 minutes. It was great! 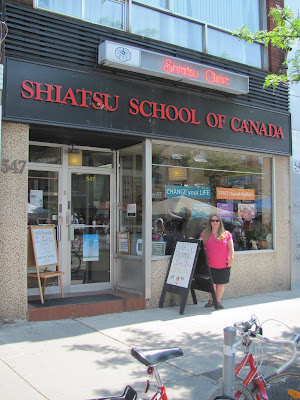 We went to Souz Dal, a regular stop for us. It is one of the few places in Toronto where you can get a Pisco Sour but apparently Pisco is hard to come by these days so I had to do without. Their mojitos are excellent so it was easy to forgive them. 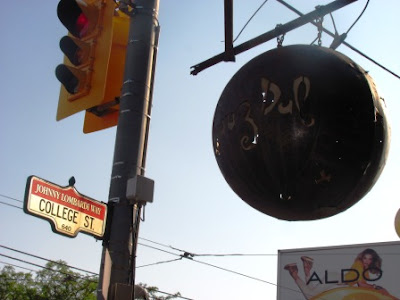 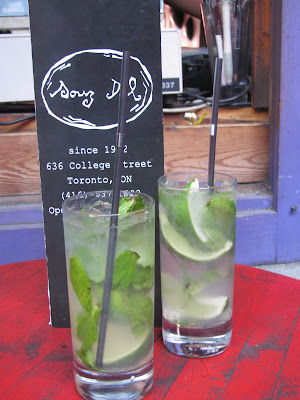 It was a great day and we will definitely be back next year. 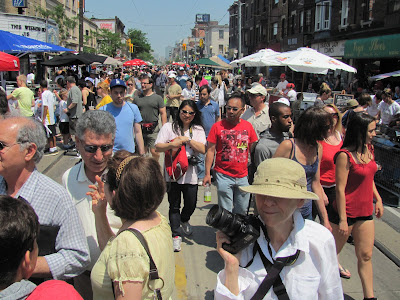