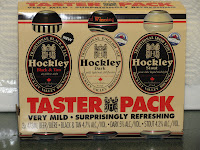 When I think of Hockley Valley, I always think of skiing. Even though I have had Hockley Dark ale before, for some reason I never think of the area having a brewery. They do have one ... Hockley Valley Brewery.

This week at the LCBO, I found they have a three-can taster pack on the market. So one came home with me.

It was started in 2002 in Hockley Village in the Orangeville area. Their website said their original idea was to be a whiskey distillery. Not sure if they are joking about making whiskey from cow manure. I hope so!

While making their first batch, they realized that it would be too long a wait before the finished product was ready. So they decided to brew beer.

The first few batches they turned out were simply known as Hockley Beer. Then they brought in an experienced Brewmaster Andrew Kohnen and the company took off. First he brewed Hockley Gold, then his next creation, Hockley Dark, won Gold a the 2007 Ontario brewing awards. The same year the brewery expanded and moved into a larger area in Orangeville. In 2008, they also won gold for Hockley Dark at the Canadian brewing awards.

Now there are three different beers in the pack, Hockley Black and Tan (4.7% APV), Hockley Dark (5% APV) and Hockley Stout (4.2% APV). This will also be the order in which I will try them, following a natural beer progression. 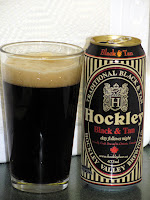 Hockley Black and Tan: This is a combination of their Stout and their Light Ale. I have had Black and Tans at pubs before. Lets see how this compares.

It pours black in colour, with a good head which disappears rapidly. There are no lacings along the side of the glass. There is a slight aroma of coffee. On tasting this, it is a little creamy but not a lot. I can taste the stout but it is also a little watery. This is more of a stout light. Stout light, but an enjoyable stout light. Stouts are usually tasty but not refreshing. This is somewhat refreshing too! 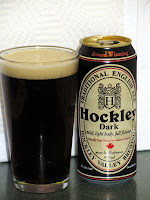 It pours brown in colour, typical for a dark beer. The head took a little time to dissipate and, yes, nice lacings do line the inside of the glass. I found very little aroma. I asked Teena, who has a better nose than myself, and she found there was not much aroma.

It is a little watery but very flavourful. I find it a little nutty. I was surprised by the subtle bitterness in the end and the long finish. It is a very nice beer. 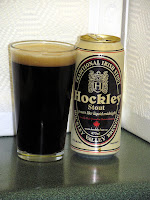 Hockley Stout: This one pours black as stouts do with the that coffee smell of roasted malt. It seems creamy as it pours with a very aggressive head which disappears fairly rapidly leaving behind very little in the way of lacings.

The proof is really in the taste and this has the excellent taste of a stout. The bitter taste of the roasted malt and coffee tones comes through. At 4.2% APV I expected it to be a little more watery but this is a full flavoured stout.

Of the three, I would say the stout was my favorite. There was not a beer in this trio which I did not like. Any three I would have again. As always I love the idea of a light beer, which at 4.2% as the stout could be considered, being so full of flavour.

More of the Hockley Stout will hopefully grace my fridge in the future. I am unsure if it is sold on its own in downtown Toronto.

I will be looking, though!
Posted by Swordsman at 21:56