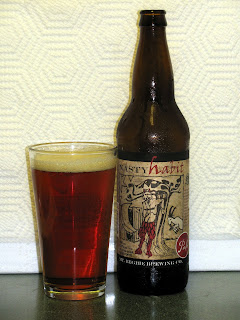 "Allow yourself to be seduced by our nasty habit. A generously hopped IPA balanced by a diabolical blend of rich specialty malts and pure mountain water. A wicked ale that leaves you lusting for more."

I like the sound of that! It's what they have on the side of the label.

Back in March of this year, Teena was out west on business and brought me back a Mt. Begbie Tall Timber Ale which I featured as a Beer of the Week. I finished the article with "This is a nice, enjoyable beer. Makes me hope one day to be able to try more from this brewery."

Well, Teena was out west again, this time on vacation with her sister Sarah and brought me back a delicious sounding beer from Mt Begbie, Nasty Habit IPA. She knows I love hops and I love IPAs. I love her too and for more reasons than hauling beer back for me when she is away.

I hope this stands up to the bragging on the label.

When I cracked the top and took a whiff, lots of floral hops came to the nose. I asked Teena to sample the aroma. Let's just say she does not appreciate hops the same way I do. It pours a coppery colour, which I expect for an IPA with a good head, which leaves behind lots of lacings along the sides of the glass.

It is not as hoppy and bitter as I expected from the aroma, which I know comes from dry hopping but did expect a hoppier, more bitter beer. This I would consider maybe a pale ale instead of an India Pale Ale.

That's not to say it is a bad beer. It's an OK beer. I was surprised that with a 6% APV, it had a very watery mouthfeel. Not much taste to start but builds to a decent bitterness in the finish.

This is a disappointing IPA, not one I would get again.
Posted by Swordsman at 20:50