The Centennial Beer of the Week- Samuel Adams Utpoias 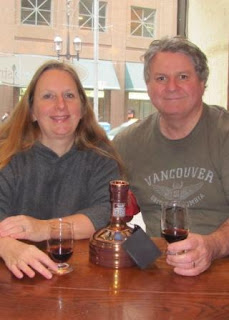 A few years ago, I went to bed and when I woke up I found that Teena had a surprise for me. She had stayed up and set up this blog for me. It took a little while for me to find my direction on what I really wanted to write about, One of my very early ideas was to try a beer each week, that I had never had before.

Thus, the Beer of the Week was born!

As I tried more and more excellent brews, I found myself getting further and further away from the cheap "buck a beer" and more and more into quality craft brews. Now I border on being beer geek but still have a ways to go before I get there.

Over the past 100 weeks, I have tried 100 different beers from 89 different breweries and 21 different countries. It has been a world tour experienced mostly from the safety and comfort of my own living room.

For number 100, I wanted to try something special ... something very special. Then I heard that Samuel Adams Utopias was coming to Ontario. That would be perfect for my 100th BOTW!

Why is it so special? 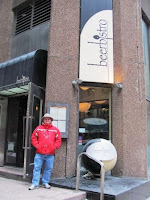 different strong beers that have been aged in various barrels that once held cognac, bourbon and port. Brewery founder and chairman Jim Koch says, "It’s really made by a completely different process than your typical beer. It’s not just ‘brew the beer, bottle the beer'. Really, it’s a lot like the blending they use to make a fine cognac, where they combine things from different barrels".

It comes out in very limited quantity. I heard that only 3,000 bottles were produced this year.

So 70 bottles ... that's right, just 70 bottles were coming to Ontario and the LCBO would use the lottery system to see who would win the right to purchase a bottle. 1675 people put their name in for auction. If it was found you entered twice, you were excluded. To make the odds better for me, Teena put her name in as did a friend of mine, Sara. In the end, sadly we all received emails to say we didn't win.

Damn it! This was 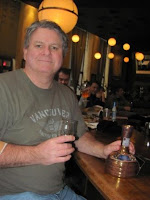 becoming a quest for the Holy Grail of beer and it looked like I was not going to find it.

Then I heard that the beerbistro was getting an order! The beerbistro was one of my favorite beer places in the city and is now my very favorite! I called them Thursday and yes, the order had arrived! A one and a half ounce serving would be sold for $20. 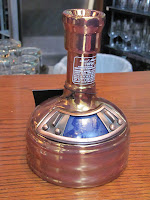 So we walked in and found ourselves a place at the end of the bar. When just having a couple of drinks, I prefer sitting at a bar instead of a table, especially at a place like this where the staff really knows beer. When asked if we knew what we wanted, we told them we sure did and ordered 2 Utopias. A place like this has a glass for every type of beer so I was not surprised when the special engrave Utopias glass.

This beer, or properly called a barley wine, is served at room temperature. It is deep brown in colour and full in aroma. I thought I could smell multiple things but for some reason, butterscotch came to mind. Although 27% APV, it did not have any alcohol in the nose.

Now time for the moment I had been waiting for ... the first sip.

Wow! It was very sweet, something I did not expect. There were so many layers of flavour in this. I could se 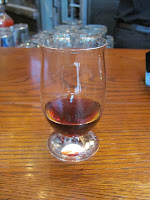 nse cognac, sometimes butterscotch and caramel. It had a very syrupy texture, which clung to the sides of the glass when sipped. The finish lasted on the tongue and sides of the mouth for a very long time.

Yes, this was worth the hunt!

Although made with all the ingredients that beer is made from, I would describe this as a liqueur more than a beer. As sweet as it is, it does contain a variety of hops. I cannot believe how much more sweeter this might be with with out them.

Teena loved it too. She also found it very sweet. She found it very flavourful and said it reminded her of cognac without the harshness. She said that if she had not been told beforehand, she would not have guessed this was a beer.

This is a very tasty beautiful sipping drink.

The bottle is beautiful too. Shaped like a brew kettle, the kettles doors slide open to reveal a portrait of Samuel Adams hoisting a beer. Very cool.

In the end, 3 things upset me. The first was when my glass finally emptied. I knew Teena was enjoying hers too much to share. The second thing was now I was very truly disappointed that I did not have a bottle of my own. The third was now the event and the anticipation preceding it was gone. I think I enjoyed the anticipation as much as I did the beer.

Teena and I plan to return in March for another sample. Next year again I will be putting my name in the LCBO hat for another chance at a bottle of my own. Even at $115 a bottle, it is very worth it!

It was a great way to celebrate my 100th Beer of the Week!
Posted by Swordsman at 10:08